This summer, the opportunity arose for me to accompany my husband on a military trip to St. Croix, US Virgin Islands--my first time ever out of the country! Although St. Croix was never on my wishlist of places to visit, I am so glad I went! 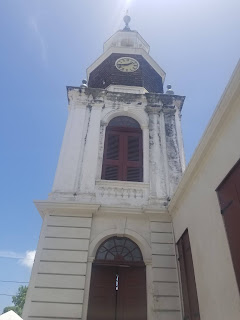 Beyond the expected tourist vibe, this Caribbean island boasts an interesting slice of colonial history. It was, in fact, a colony of Denmark during the 1700's. St. Croix's two towns, Christiansted and Frederiksted, were named after Danish kings. We stayed in Christiansted, just steps away from the first Lutheran church built on the island (unfortunately not open to the public), and about a block further lay the Danish outpost of Fort Christiansvaern. Of course I went exploring ...
The old church is now called, simply, "The Steeple Building." A bronze plaque reports that construction began in 1750 and that this first Danish Lutheran Church was consecrated in 1753 as the Church of Our Lord of Sabaoth and served until the move to a new sanctuary in 1831. (Which I also saw and admired--and is still in use!) The church building was then used as a military bakery, storehouse, town hall, hospital, and school. It still, says the inscription, bears the aspect of 1796.

Coming from drought-stricken North Dakota, which usually has a vivid beauty of its own even in August, I found myself continually amazed at the fresh greens and striking blues of the island and the waters around it. There's a reason why "Caribbean blue" is a thing!
It's funny, too, how a history nerd like myself gets excited just over an 8th century fort and cannons. I mean, really, how many can you see before they all start looking alike? But there was something about the cheerful yellow of Fort Christianvaern, and the weight of history lurking in its halls ... 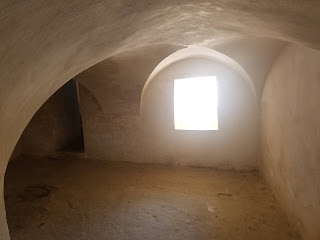 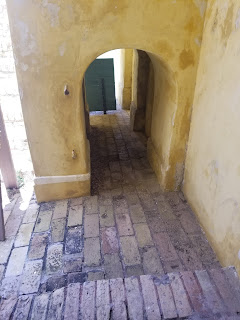 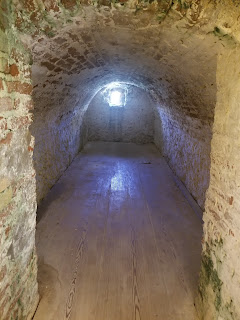 There were too many rooms of the fort to share, but some of the more interesting ones included the aresenal, still containing various artillery equipment, gear, and firearms:

Of course, like so many other places, the 18th century history of St. Croix was entangled with the practice of slavery. Sugar plantations comprised a large portion of the island's industry, and old sugar mills still stand scattered about--like this one on the boardwalk in Christiansted, now converted to a shop and restaurant by day. 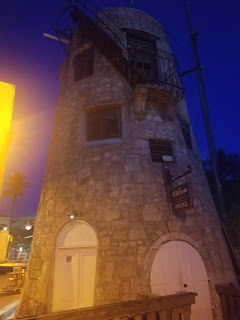 In all, it felt a little like being on a "Pirates of the Caribbean" set, except for reminders that we remained firmly in the 21st century. (Among other things, the sanitizer dispensers literally in every nook and cranny!)

I also discovered two connections to American colonial history, right there on St. Croix ... but those will have to wait until next time!
(If you think you know at least one of them, do go ahead and post in the comments!)