Traveling around my home state of Georgia as a young person, I noticed numerous historical markers mentioning “The Old Federal Road.” Turns out, there were actually two such roads. Around the time the century turned from eighteenth to nineteenth, the U.S. government used treaties with Creek and Cherokee Indians to widen existing trails. One followed the Lower Creek Trading Path to Alabama, and the other followed the Cherokee Trading Path to Tennessee. 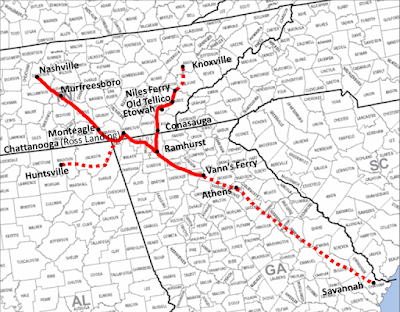 Inland-bound travelers from the coast used the road from Savannah to Athens. If they wished to continue north c. 1804, they left the control of the Federal government around present-day Flowery Branch, crossing the Chattahoochee River into the Cherokee Nation at Vann’s Ferry. Cherokee leader James Vann leased the right to run the ferry to various settlers from 1805 until his murder in 1809, when his son Joe took over until 1820.   In current Murray County, the trail climbed past Vann’s 1,000-acre plantation and a tavern where travelers could partake of grog from a walk-up window.

Past Two Mile Creek and Six Mile Creek, Coal Mountain and Hightower (or Frogtown), the house of entertainment ran by Jacob Scudder received censure by the Cherokee. Lewis Blackburn and Thomas Buffington owned taverns on up the trail.

In the rugged mountains east of Tate, Georgia, in 1836, a man named Henry Fitzsimmons guzzled a little too much moonshine. Evicted from the stagecoach, in a fateful reversal of fortune, the Irish stone cutter noticed an interesting rock outcropping. He stayed to purchase land and start the marble industry in Georgia.

The northern Old Federal Road continued to Talking Rock and Blalock Mountain to the Coosawattee Old Town and Cherokee Town. At Ramhurst, one fork took travelers north to Knoxville, while the other fork took them northwest to Spring Place, Ross’ Landing/Chattanooga and Nashville.

Do you enjoy rambles along historic highways? Are there any good ones near you?
Posted by Denise Weimer