Criminals of Early America: the Harpes

When studying historical figures, it's always interesting to try to figure out why people made the decisions they did. Some leave a clear enough record of their thoughts and feelings to give us at least an educated guess on their motivations. Others simply, as I state elsewhere, rise from the mists of history with no real clue to either their origin or inner workings of their mind.

With some of those, we really wouldn't want to see inside their minds, based on what we know of their actions.

The notorious Harpes are two such examples, in my opinion, billed as America's first known serial killers. It's a toss-up whether their criminal activities fit the serial killer mold or are better described as a murder spree, but regardless of what you call it, their thirst for blood and cruelty cast fear over the frontier for the better part of a year. Revenge killings, robbery, torture--they did it all, with no respect to age or gender.

Referred to as the Harpe brothers, Micajah (pronunciation up for grabs, based on phonetic spellings: Mi-CAY-uh or Mick-uh-juh/jer) and Wiley (often spelled Willey, so was it short for William? we may never know) were more likely cousins. They were often known as "Big" and "Little," Micajah being the elder and, of course, bigger, though Wiley was tall enough in his own right. Early records show the spelling of their last name as Harp, which may be short for Harper, their suspected birth name. Tradition and legend pegs them as sons of a pair of brothers who immigrated from Scotland, staunch Tories who lived in the North Carolina backcountry and probably participated in the Battle of Kings Mountain. I've observed elsewhere that if the boys were as young as estimated, then it's very likely that the brutality of partisan warfare, both during that battle and afterward, did imprint them with the cruelty they're later recorded as having indulged in.

Regardless of the reasons why, the end result was horrifying--two men whose respect for God and Scripture appears nominal and capricious at best, whose actions were defined more by a demonic enjoyment of inflicting pain than greed or even need. 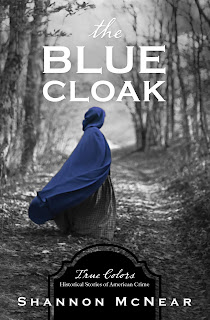 They didn't even fit the profile of your usual highway robbers--men like Mason and his gang who chose piracy but took obvious pride in having a certain code of ethics. Robbery accompanied some of their murders, but certainly not all. A simple Google search reveals two-dozen-some websites which sketch many details of their misadventures, and most of which I list under sources for my upcoming release, The Blue Cloak. This story is best described as historical suspense meets true crime, with a thread of romance in the form of a fictional couple thrown together by the Harpes' reign of terror.

A particular area of interest for me as I researched the story was the plight of the Harpe women--two who were verifiably wives by law, and a third. All three women were heavily pregnant when the family surfaces on the Wilderness Road near Hazel Patch, Kentucky, in December 1798, and all three later gave birth in jail in Danville, Kentucky. By August 1799, only two of the three babies still survived. Many have condemned the women for not trying harder to get out of their situation, but I understood all too well the level of intimidation they must have been subjected to, how they surely felt they had no options while both men still lived.

Over the next couple of months, I want to look not only at how the justice system of the time dealt with such situations, but the possible, surprising link between the Harpes and a revival known as America's Second Great Awakening.

It might be a good excuse to rejuvenate my New Year's resolutions and evaluate how I'm doing with my "Word for the Year", but why not take advantage of a little history to do just that?

Did you know that, back in the day when the Colonies were young, it wasn't until 1752
that everyone got on board with the Gregorian Calendar and January First began each new year? For centuries, the New Year belonged to March 25th due to the fact that everyone followed the Julian calendar, which emphasized March 25th as the date of Jesus' conception. However, not only is that questionable (since theologians suggest Jesus was likely born in October), but the whole equinox thing was kind of a mess. In fact, to straighten things out, they had to lose eleven days in September—POOF!—just to get the calendar properly aligned.

Here's the thing, most of the world switched over to our "modern" Gregorian calendar in the 1500s, but it was another two centuries before the British joined the New Year party, because--you know England--they've always been sort of starchy about their traditions. Yet they eventually had to face it. The messed-up calendars affected trade and banking and even George Washington's birthday. (More on that in a sec.)

So in 1752 Parliament passed the Calendar Act of 1750, and January 1st became the official New Year beginning in 1752.

What I find funny isn't that they changed the date so much as what the new year meant. It wasn't a time to celebrate Baby New Year coming in with a smooch under the mistletoe or tossing confetti. It was a time to collect the rents, pay the tax man, and handle annual paychecks. (Well, yeah for that last one anyway.)

They did have a few fun traditions—some mumming and wassailing and visiting friends. Oh—and about George Washington... He changed his birthday from February 11th under the old Julian calendar to February 22 under the new one. I'm not sure what the people did who were born during that eleven-day elimination period in September. Maybe the summer loving ones grabbed a date closer to August and the harvest lovers aimed for October. I know which way I'd have gone.

Before you go, mark your Gregorian calendars for Monday-Friday, Feb. 10-14 to get The Deepest Sigh (Echoes of the Heart, Book One) for FREE! Books Two and Three will also be on sale, but for FIVE DAYS ONLY! 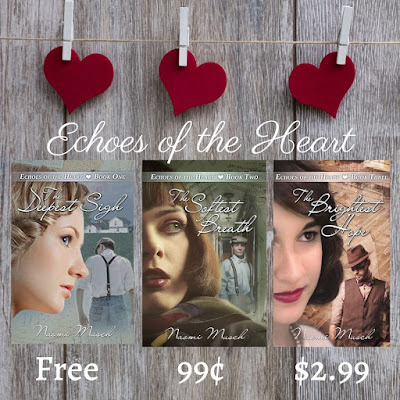 A Woman Compelled by Christian Charity
Surrounded by the musket fire of the American Revolution, Rachel Garnet prays for her family to be safe.  When the British invade the Mohawk Valley, and her father and brother don’t return from the battle, she goes in pursuit of them. She finds her brother alive but her father has been killed at the hand of the enemy. Amidst the death, how can she ignore a cry for help…? Rachel reluctantly takes in a badly wounded British officer. But how long can her sense of Christian duty repress her hatred for his scarlet coat?
A Man Lost to the Devastation of War
Passages of Scripture and fleeting images of society are all Andrew Wyndham recalls after he awakens to the log walls of his gentle prison. Even his name eludes him. Rachel Garnet insists he is a captain in the British army. He mourns the loss of his memory, but how can he hope to remember war when his “enemy” is capturing his heart?

This week is the anniversary of the release of my debut novel, The Scarlet Coat. 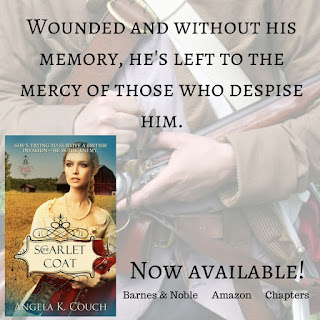 To celebrate its release The Scarlet Coat is on sale! (As is the whole series.) 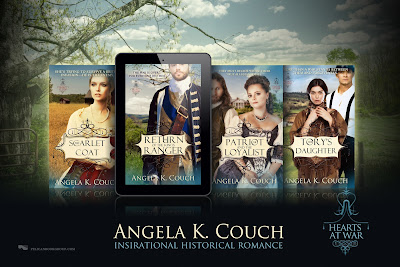