In the 1760's, a British businessman, Richard Arkwright, committed industrial espionage to establish his waterframe spinning jenny and his power loom. These two machines revolutionized the textile industry in England and led to the invention of the cotton gin by Eli Whitney in order to keep up with demand for raw cotton. Before the gin cotton fabric cost as much as 60 cents a yard. After, 10 cents a yard. 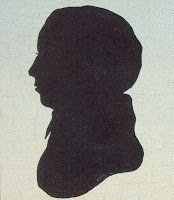 In 1810, Francis Cabot Lowell (1775-1817)  from Massachusetts took a trip to Europe and ended up in Manchester, England. For his health he said. His real purpose was to tour the Manchester mills and bring the machinery schematics back to America. A successful venture capitalist and businessman from an old Boston mercantile family, he graduated from Harvard the same year Whitney invented the gin, in 1795.

At first Lowell tried to legally obtain the machinery plans. When that didn't work he drew on his fascination and aptitude with machines--and his photographic memory--to commit the intricate looms and spinning jennys to memory. There is some speculation he may have used secret compartments in his steamer trunks to hide notes from the very thorough British customs officials. If those notes did indeed exist, he destroyed them.

He returned to Boston in 1812 and began the task of recreating what he'd seen. And improving and speeding up the machinery. Both tasks were accomplished and left elite engineers and mathematicians of the day in awe of his mechanical genius. Two years later he presented the first working model. By 1815, over 27 million pounds of cotton had been spun and woven in the United States. 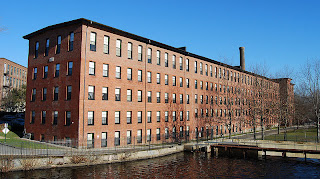 He built his first mill in Waltham, Massachusetts, on the Charles River. This picture is that building. It was the first mill to cover the entire production--from raw fiber to finished cloth--in one building.

The town of Lowell, Massachusetts--the center of the 19th century cotton textile industry--was his vision, but he did not live to see it built. The filthy, dangerous, deadly conditions in Manchester appalled Lowell and he knew it would never work in America. Using the paternalistic mindset common in his social class he created an entirely different model for a mill town.

After his death in 1817 Lowell'ss brother-in-law, Patrick Tracy Jackson, moved the mill 30 miles north of Boston on the Merrimack River, to a place where the river fell 32 feet in less than a mile. This down slope provided the water power for the mills. Now known as the Merrimack Manufacturing Company, it dominated the textile industry here for close to 100 years.

Next time you wear your favorite cotton dress or shirt or even your favorite pair of jeans, thank Francis Cabot Lowell's photographic memory and skills as a spy.
Posted by Rachel Leigh Smith

New comments are not allowed.