How Frontier Folk Stored Food for the Long Cold Season

There've been many posts on this blog in years past about cooking, keeping house, and other day-to-day activities in Colonial times. What has always been of special interest to me is the nature of storing food in general, of stocking up, of putting by. I'm especially curious about how people survived on the fringes of society on the frontier. I think of these things quite often now that we are in the height of fall and my family prepares for winter in our own northern Wisconsin way.

Let's look at a few of the things people needed to do back then just to store food enough to  survive the cold months that would bear down on them.

STORING FOR A LONG SEASON

Of course, unless they were professional hunters or trappers, most Colonial pioneers planted. That might mean a field of corn or a kitchen garden. They harvested just as we do. And if their work wasn't destroyed by either animal or human marauder or by pestilence, then they needed to store their harvest. Remember that on the frontier, cabins were usually very small. While we love to admire the beautiful colonial houses of the eastern seaboard settlements, most cabins in the wilderness weren't much bigger than your average master bedroom or living room. One wall was likely taken up by a brick or stone fireplace where all the cooking was done. Another area was squished in for sleeping. All space was carefully used, and there wasn't a "living room" at all, unless you actually mean a general room where all the real living was done.

Now try to imagine where and how you'd store an entire winter's worth of food supply, along with everything else you owned, in such a tight space. You'd have a corner or area you considered your pantry perhaps. In your pantry you might keep bags of dried food such as sugar, corn meal, dried beans and peas, and other grains; canisters or jugs with pickled items to make them last; barrels or more jugs for liquids--wine, vinegars, and so on. That's a lot of space to consume. So you'd look overhead for storage too. You might hang ropes of onions, garlic, peppers, and dried herbs. If you were fortunate to have a smoke house, you could keep smoked deer haunches or possibly a ham or two, but if not, your smoked meat--or dried jerky over a very low fire--might also hang from the rafters of your cabin.

Really fortunate people might have a root cellar for some crops, but hunters, trappers, and folks recently arrived on the frontier might only be able to dig a hole in the ground to hide away their goods. No matter where the storage went, I would be a wreck worrying about rodents!

Frontier folk might depend often on hunting and foraging for food, but once the wintery snows settled in, the possibilities for foraging greatly depleted. If you did bring down game, you might have to find a way to preserve and store it, which also meant figuring out how to save the hides or feathers or other parts you planned to use later--an integral part of frontier living. Plus, you needed to store your munitions and winter clothing.

If you owned animals, you might have a supply of meat, milk, and eggs that needed preservation. Milk might be made into cheeses (again to the rafters) or butter (filling those crocks). More space-takers. Those early breeds of chickens didn't lay all winter long. Any eggs you weren't going to eat promptly needed to be safely stored from bacteria and evaporation.  Townsends on Youtube explains a variety of methods for that in great detail. They involved:

Room temperature storage--but only eggs that had not been washed or cracked can be stored up to a couple of weeks this way. Unwashed eggs have a natural protective barrier on the shell that prohibits bacteria from entering or liquid in the egg from evaporating out. When I raised chickens, I rarely washed my eggs for this very reason, even though I had the luxury of modern refrigeration at hand.

According to Townsends, the best way to preserve eggs was to store them in slaked lime, which is merely quicklime soaked in water. It had a 100% success rate after 8 month. Limestone was a product in the 18th century that was readily available and still is today.

Another highly successful egg-storage method was to cover eggs in wood ashes. This technique yielded a really good success rate of 80%. A little taste change in the egg did occur. Coating the eggs with an oil such as butter or rendered animal fat was another method. Rancidity could be a problem with butter, but the meat suet helped the egg last indefinitely.

A few other, less successful methods of storing eggs involved: coating them with a varnish. Yeah... So there was that. Storing eggs in wheat bran is another but this had only had about a 30% success rate over time. Burying eggs in salt or storing them in brine was tried too, but this was not highly successful as it dried out the egg and made it taste salty, although it did a good job of preventing bacterial infection.

If you want to try storing eggs for a period of time, do check out Townsends video with instructions and subscribe to his extremely interesting channel on all things American historical frontier.

Bear in mind that individuals on the frontier who did have the luxury of owning a few chickens or a hog or horse also needed to store food for their animals. That's hard enough in modern times with tractors, barns, and harvesting equipment. Back then by hand... Eek.

Nevertheless, through all the difficulties and consuming amounts of time it took to "put by" for winter, the rewards must have been great, especially the peace of mind in knowing they'd have enough to subsist on. I know that even nowadays, when I can hop in my car and run to town for a grocery pick up, nothing outweighs the feeling of accomplishment I have over looking at a lineup of home-canned applesauce or salsa on my shelves, or counting squash for the mountain I'm preparing to store in my basement.

What about you? Do you "put by" for winter? What aspects of historical food preservation intrigue you the most?

October 7th is the anniversary of the Great Peshtigo Fire which took place the very same night as the Great Chicago Fire. Peshtigo, however, holds the record as the deadliest fire in American history. In remembrance of that night, The Red Fury, my novel about three people caught up in in that tragic event, will be on sale this week (Oct. 4th-9th) for only 99¢. Don't forget to grab it! 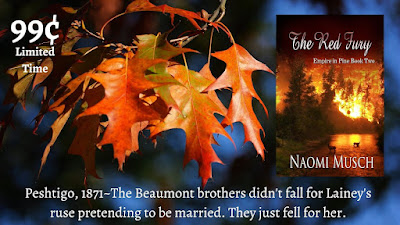