Today I’m continuing my series on the realities of 18th century hygiene by taking a look at bathing practices in the 1700s. We Americans have to be among the cleanest people on the planet. Most of us take bathing on a daily basis for granted, or certainly several times a week. But throughout history that has rarely been the standard and isn’t in many other countries even today.

People living back in the 18th century wanted to feel and look clean as much as we do, but their standards of cleanliness weren’t the same as ours. Taking a bath by immersing one’s body in a tub full of warm water wasn’t a daily or even weekly practice for great majority of people. For one thing, clean, water was hard to come by. Today all we have to do is to turn on a faucet, but in the 18th century finding and drawing enough clean water, and then heating it in order to take a full bath required a ton of labor. Without sewage systems, running water, and indoor plumbing, somebody had to carry all that water from the source, heat it, and carry it to the tub. And afterward they’d have to carry it all away. You were either going have to do it yourself or be able to afford servants to manage the task. Heating large amounts of water over a fire was also no picnic, not to mention the need for plenty of firewood, which first had to be chopped … well, you get the idea. Not going to happen too often!

Another force working against daily bathing was that during much of the 18th century immersion in warm water was considered to be unhealthy. Many doctors believed that it allowed diseases to enter your body through the pores in your skin. Which, considering the dearth of adequate sewage systems might well have been true! Views on this did differ in various countries, however. Public bath houses remained popular in Germany, and people in the Nordic countries and Russia favored saunas, but these were not widely available in France and England.

In any case, people did wash their bodies. It was not uncommon for people to bathe outside in lakes and rivers. But most of the time taking a sponge bath using a basin of water, soap, and a sponge or towel, as has probably been done since early in human history, did the job just fine. In fact, this method can get you cleaner than sitting in a bathtub unless you also have a way to rinse off afterward. Louis XV solved the problem by soaking in one tub and rinsing in another, which no doubt required numerous servants to heat and carry sufficient water, which, of course, is no problem if you’re king. His mistress, Madame de Pompadour, was also very fond of bathing, as was Louis XVI’s queen, Marie Antoinette, who, being Austrian, naturally expected a bath every morning. Bidets were also very popular in France for washing the more intimate areas, or a basin on a chair could easily be substituted if one was not available.

Over time some medical experts began to tout the health benefits of immersion in cool water, and by the end of the century bathing regularly became the norm at least among the upper classes. In England Sir John Floyer, a physician in Lichfield, discovered that local peasants used certain springs in the area to treat ailments. After doing some research, he published a book in 1702 that aroused interest in therapeutic bathing in cold water. It ran through six editions within a few years and was translated into German. Dr. J. S. Hahn of Silesia used this text as the basis for his book, published in 1738, On the Healing Virtues of Cold Water, Inwardly and Outwardly Applied, as Proved by Experience. They obviously loved long titles back then! In 1797 Dr. James Currie of Liverpool followed up with a book on the use of hot and cold water for treating fever and other illnesses that considered the subject from a scientific viewpoint. Thus by the dawn of the 1800s, hot baths were rapidly coming into their own along with sewage systems and indoor plumbing.

I know many people love to lounge luxuriously in a hot bath, but that doesn’t work for me. I prefer taking showers, which allows me to get toasty warm without overheating, while also solving the problem of rinsing. Which do you prefer—a bath or a shower? Please share your preferred bathing experience with us. And we’d also love to hear about any special bath soaps or other bath products you especially love that add to the pleasure of getting clean!

~~~
J. M. Hochstetler is the daughter of Mennonite farmers and a lifelong student of history. She is a professional editor, a publisher, and the author of award-winning historical fiction whose books have been endorsed by bestselling authors such as Laura Frantz, Lori Benton, Jocelyn Green, Michelle Moran, and MaryLu Tyndal. Her American Patriot Series is the only comprehensive historical fiction series on the American Revolution. She is also the author of One Holy Night, which won the Christian Small Publishers 2009 Book of the Year and co-authored the award-winning Northkill Amish Series with Bob Hostetler. 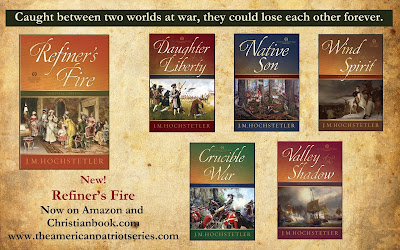