First European Dwelling on the "Delightfullest Lake in the World"

I have a new novel coming out about a year from now, and the setting may not be entirely familiar to some readers. For that reason, I've embarked upon a series of posts meant to shed light on the history of the fur trade around Lake Superior, and in particular, along the northern Wisconsin (Ouiscansainte) shore and northeastern shore of present-day Minnesota. I hope to give readers an inside look into a rugged world long past--and to also glimpse a beautiful part of the country you can still discover today.

Last month, I wrote about how the Beaver Wars aided in European conquest of North America. Prior to the Beaver Wars, a few Jesuit priests and trappers, as well as some famous explorers like Nicolet, La Salle,  and Joliet reached Wisconsin. But long years passed until other white men came to the country. Finally, as those earlier wars died out, Europeans pushed further into the wilderness once again, including the intrepid entrepreneurs Pierre-Esprit Radisson and his brother-in-law Medard Chouart, Sieur des Groseilliers. (You have to wonder about the wives of such explorers. Perhaps they deserve a novel of their own. Hmm...) I digress. 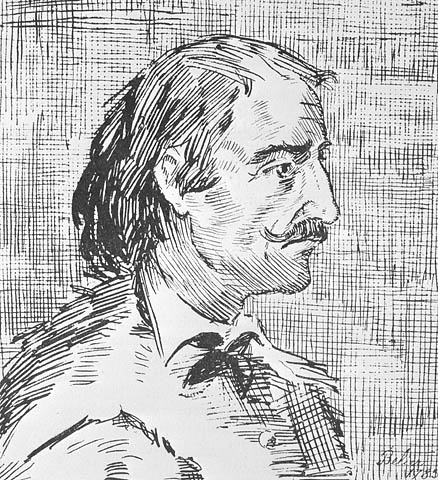 Pierre-Esprit Radisson
Wikimedia Commons
Radisson and Grosseilliers famously explored the Lake Superior region, including the upper Mississippi River between Wisconsin and Minnesota. Radisson became particularly well-known, since he was the first to author colorful descriptions of my state (Wisconsin) and of his experiences in the wilderness. 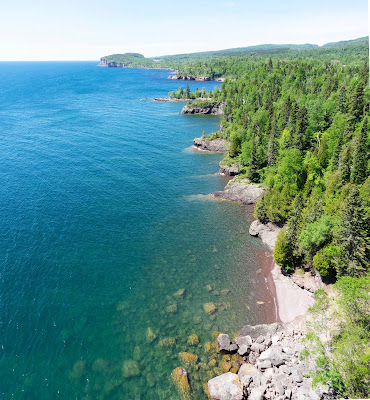 Photo by Lucas Ludwig on Unsplash 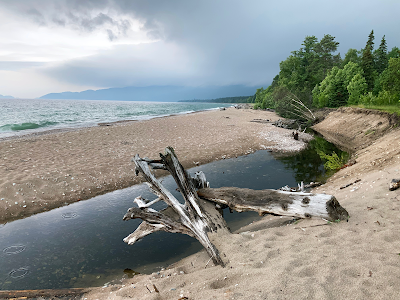 Photo by Paul Ewing on Unsplash

Although other traders had come into the region, it's been purported that Radisson and Grosseilliers were the first white men to establish themselves for any duration, settling for about a year on Superior's pristine Chequamegon Bay, around which can now be found the towns of Ashland, Washburn, and Bayfield. It's said they built a dwelling here--a wooden cabin and a crude stockade--near where Ashland is today.

I used to live in Ashland. Oh, how I wish I had known the history of the area prior to my living there when I was only nineteen! 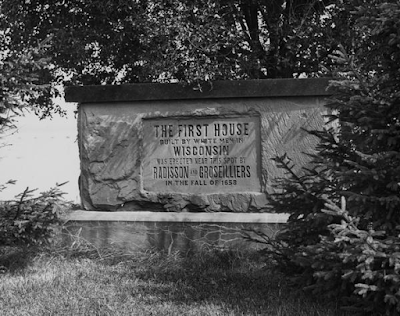 This marker commemorates the first dwelling and stockade at the mouth of Fish Creek, where it empties into Chequamegon Bay. The creek was called Wikwedo-Sibiwishen by the Indians, meaning Bay Creek. There was a large village of Ottawa who raised Indian corn near here at one time.
The temporary home built by the explorers was likely quite a crude cabin with a three-sided stockade. Radisson described it as having a door facing the water, and the pine-poled stockade itself was laid about with piles of boughs in which they'd strung a cord laced with little trade bells to give them warning of marauders, possibly the Huron for whom there was some apparent distrust. However, it was never put to the test, as they were never robbed or assaulted.
A copyrighted drawing depicting what the building might have looked like can be viewed on the Wisconsin History site here.
Surrounding Chequamegon Bay are beaches, red sandstone cliffs, and thick pine forests that stretch for hundreds of miles south and west, and all the way to Lake Michigan to the east. Myriad rivers wind through these dense woods, some coming so close to one another that Wisconsin became an intersecting highway all the way to the Mississippi and south to the Gulf, and via the Great Lakes northeast to Hudson's Bay and eastward to the coast--ideal routes for those who traded in fur for decades to come.
Radisson and Groseilliers were true coureur du bois (see my 2019 article), later credited with establishing the Hudson Bay Company, which still exists today. After passing their first long winter on the bay and trading with Ojibwe and Huron from they region, they then journeyed westward, following trails and rivers far into the Mille Lacs region of Minnesota, many miles away. The following spring, they returned again to Chequamegon Bay and built another shelter in a new location, this time possibly on a long sandspit. From there, after trading and adventuring as far northwest as Lake Assiniboine, they finally returned home to Quebec.
One thing is certain. The work done by Radisson and Grosseilliers paved the way for many more fur traders and missionaries to follow. Yet, the French eventually lost their foothold in this amazing country, due largely to their own king's lack of vision. Even Radisson and Grosseillier eventually turned their loyalties to the English when they were not only not recognized for their accomplishments, but actually punished for exceeding their granted authority. 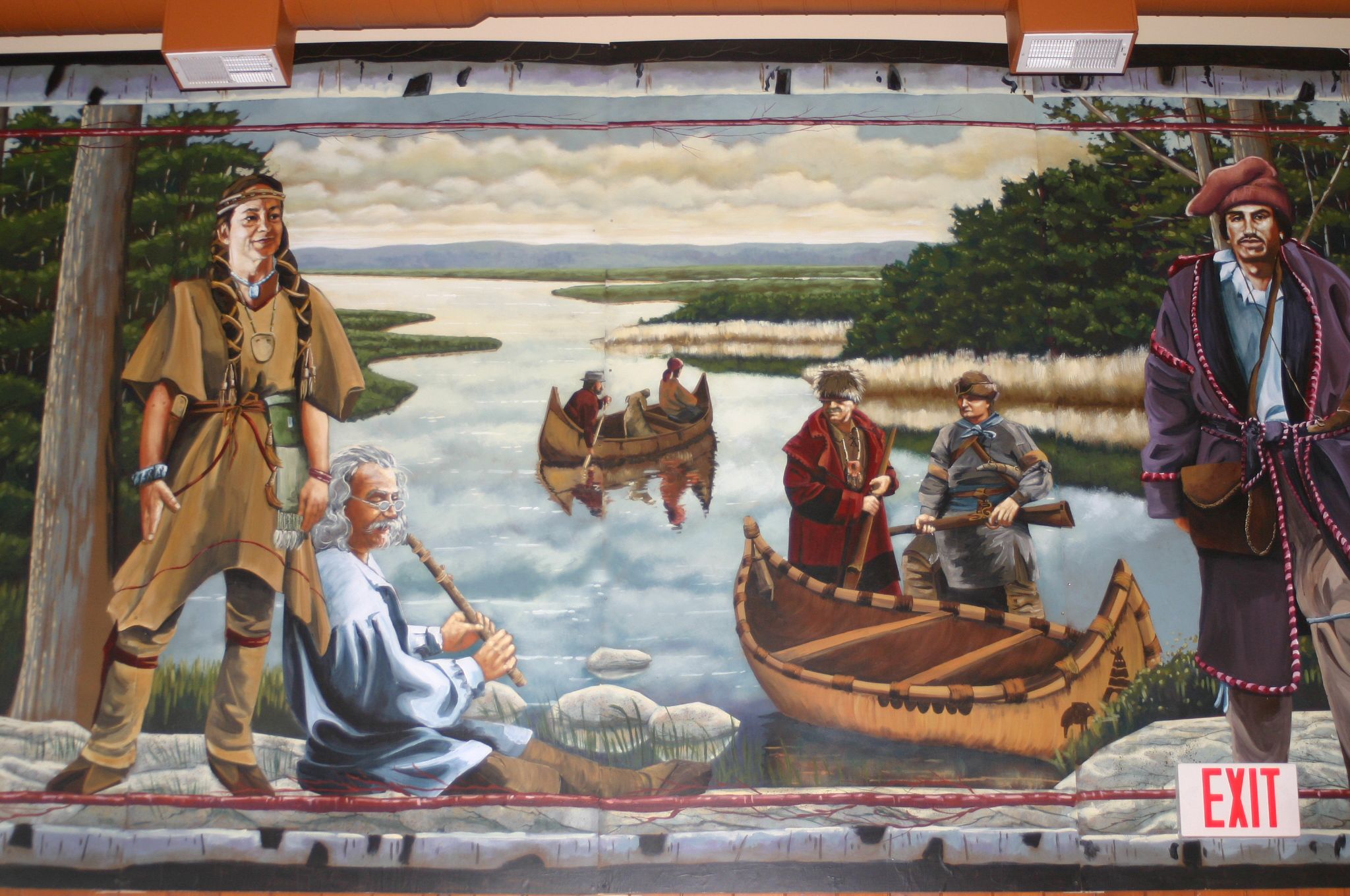 Today, Ashland, Wisconsin is a small city that stands just east of their Fish Creek location. It is known as the mural capitol of Wisconsin. Life-sized scenes like the one above depicting Wisconsin's history are painted all throughout the city. 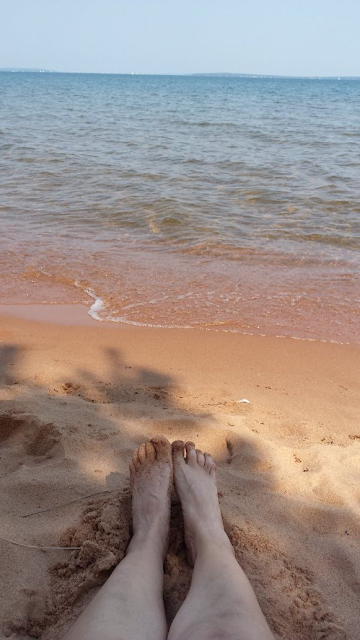 Wouldn't it be fun to travel to all the historical locations we read about in our favorite novels? Have you ever traveled somewhere just because it was in a location you read about in a novel? I don't travel much, but here I am dipping my toes in Chequamegon Bay. I wonder if Radisson and Grosseiliers ever lounged about, doing the same.
Here's to exciting explorations and discoveries for each of us in the coming new year!
Naomi
https://naomimusch.com/
Posted by Naomi Musch