There are times when people's actions or words have far-reaching and historic consequences. Such was the case in June of 1781 when a twenty-six-year-old resident of Charlottesville, Virginia made a heroic forty-mile ride that likely saved several of our nation’s founders.

That spring, the British Army was making raids along the James River. On June third, his last day in office, Governor Thomas Jefferson was with his family at his home, Monticello, near Charlottesville. Virginia's legislature had evacuated the capital at Richmond and was reconvening in Charlottesville. British Lieutenant Colonel Banastre Tarleton was sent by Lord Cornwallis to capture the governor and legislators. His 250-man raiding party hastily traveled that night to take the Virginians by surprise.

Jack" Jouett, Jr., son of a Charlottesville tavernkeeper, was at the Cuckoo Tavern the evening of June third when he observed the British contingent and guessed Tarleton’s destination. Jouett rode all night to Monticello to warn the Governor. Jefferson was preparing breakfast for several members of the legislature staying there when Jouett arrived. After warning them Jack continued his ride to Charlottesville to warn the remaining assemblymen. Thomas Jefferson and his family departed for their farm, Poplar Forest, near Lynchburg. The legislators met in Charlottesville, fled, and reconvened in Staunton on the other side of the Blue Ridge Mountains. While Tarleton caught seven legislators, most of the assemblymen escaped capture and probably execution. 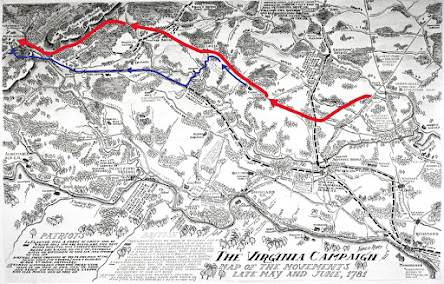 Who were these men and why execution?

Several of these legislators were signers of the Declaration of Independence, all with death warrants.

Benjamin Harrison ~ Virginia’s 5th Governor. He was the father and great-grandfather of two U.S. presidents.

The heroic ride of one young man incredibly impacted the course of American history.
Posted by Janet Grunst