Last month, I began a series about the historic fur trade on the American continent, introducing it as the trade that shaped the colonies. To our modern way of thinking, it may seem strange that trapping was such a powerful force on the developing continent, but for many decades, the rush for fur drove the North American economy and pushed nations that had colonized along the ocean shore ever deeper into the interior.

The fur trade began among the indigenous people of America themselves. Native American tribes had been trading among themselves for untold numbers of generations, and often the currency was furs. Meanwhile, the Europeans source for fur was often Russia or Scandinavia. After Europeans began expanding their interests here on this continent, it wasn't long before war broke out between Indian nations seeking to establish alliances that would help them monopolize their own powers of trade. These wars that went on intermittently throughout the 17th century, but principally from 1650-1655, became known as the Beaver Wars.

The Beaver Wars are a study in themselves. It was a period of time when the powerful Iroquois confederation sought to expand territory and control the fur trade. They established a pact among themselves that they called "the Great Peace"; however, against their enemies, the Iroquois--led by the powerful Mohawk--carried on their own form of genocide. They either brutally killed their enemies or else took them captive, absorbing them into their tribes. The Iroquois were supplied with firearms by their allies, the Dutch (and later on, the English). 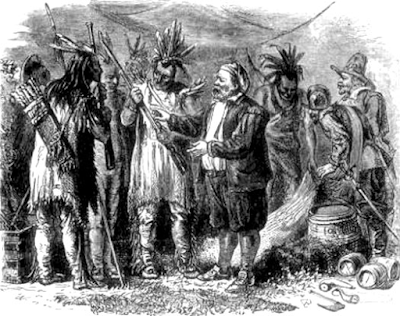 Meanwhile, the Iroquois' Algonquin enemies--remnants from tribes like the Neutrals, Tobacco (Tionontati) Erie, Susquehannock, and others who were allied with the French--had no guns, only missionaries who lived among them, attempting to convert them to Catholicism. To flee massacre, they were pushed further inland, seeking refuge along the shores of the western Great Lakes. Even there, however, the Iroquois nations sought their destruction. The Mohawks, in particular, were known for the ferocity of their raids. (The Dutch used the Mohawks as weapons of terror against the French and Hurons, while at the same time keeping a wary, untrusting eye on these so-called allies.) There is more that can be said about the Mohawks. They were the last tribe to negotiate peace, as they held out the longest in trying to hold the reins of the fur trade with the Dutch. But the Mohawk's power grab ultimately led to fractures in the Iroquois confederacy. (This after further wars and manipulations.)

While the Mohawks achieved a monopoly on trade with the Dutch, they were unable to gain control of any of the trade with the French in Montreal. The French had turned their attentions further west toward the Ojibwa nations. These included the Chippewas, Missisaugas, Ottawas, and Potawatomis. These people, along with the Miami, gave the French access to lands still rich with furs, so much so that the French government was highly motivated to support them in their confrontations against the campaigns of the Iroquois.

With French support of the Ojibwe and Miami, the Iroquois went on to suffer heavy defeats in present-day Michigan and Wisconsin. Meanwhile, English warships sailed up the Hudson to claim New Netherland in 1664. The Dutch surrendered New Netherland along with Fort Amsterdam and the town of New Amsterdam on the island of Manhattan. With their political collapse on the continent, the Mohawks lost their special powers of alliance. This further weakened the Iroquois league, though it didn't break it completely. Nevertheless, as a consequence, both England and French conquest in North America was strengthened.

At the end of the Beaver Wars, the internal struggles between Indigenous nations to secure the power of trade only weakened them and served the ends of the Europeans rather than they themselves.

Have you been attending this 3-day party, happening now? If not, come join me and a host of authors (40 in total!) for a Christmas Extravaganza, December 3rd, 4th, 5th.

AND Saturday through Monday, December 5th-7th, you can download my historical novel The Green Veil FREE! 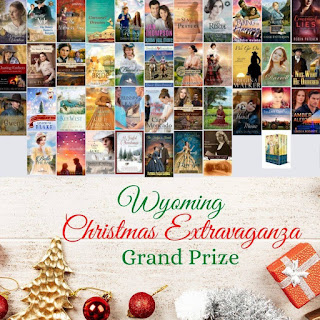 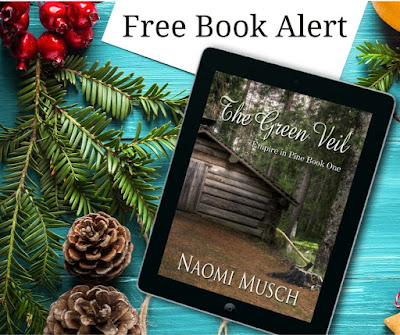 I wish you a Merry Christmas, and pray God's peace and blessings upon you in 2021!