The Coureur Des Bois -- Rebel Adventurers of the Colonial Frontier

When we think of the explorers who opened up our vast continent, we tend to think of the great frontiersmen like Daniel Boone or overland adventurers like Lewis and Clark. But there was another type of explorer who, while less famous individually, collectively made untold inroads into the North American continent. They were the many intrepid Frenchman or Scots called simply, the Coureurs Des Bois. 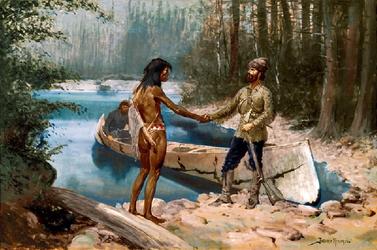 Their English counterparts on Hudson Bay would have been called "woods-runners", and to the Anglo-Dutch of Albany they'd have been known as "bush-lopers". What was common between all of them was that they were drawn into the independent fur trade by the lure of adventure, freedom, and money.

While licensed fur traders had the blessing of the government and the fur companies, the coureurs des bois were unlicensed to trade, though trade they did. That's right. They were the rebels of the forest.

The French King, in an attempt to regulate trade, had created laws which forbade anyone to go into Indian country to trade except those of the monopoly company. Licenses were granted, but only to a select few. The government preferred the native population to bring their furs directly to French merchants. But as population increased, more and more young men looked to the fur trade for their living, and with only minimal licenses being issued, that meant they had no choice but to work independently. Young men began deserting their assigned seignories (farms) in New France and escaped to the wilderness, drawn by the prospect of fortune as well as the lure of an unstructured life in the Indian villages. It has been estimated that, by the end of the seventeenth century, possibly as may as one-third of able-bodied men had chosen the life of the coureur des bois, choosing to break the law and escape to the wilderness to trade for furs themselves. Once they had a taste of the free-roving, adventurous life of the coureur des bois, they seldom returned to the colonies or their farms, even though the punishment, if caught, would be severe.

These independent traders thought that operating outside government regulation a risk worth taking and a life worth living. They genuinely enjoyed the camaraderie of the First Nations people with whom they often settled and raised families, and they became fluent negotiators and adept guides.

You may recall in my article last month, I wrote of the explorer Du Luth, who belatedly recalled that'd he'd gone on his adventure without the proper license, and made a hurried attempt to remedy the situation by claiming all the land he explored for the King of France. There were some other famous explorers who began as coureur des bois as well. Here are several of the most notable:

The coureur des bois were itinerant bush-rangers, whose explorations and inroads into the continent paved the way for many to follow.