Some things are just too strange to be coincidence.

So this past summer, my husband's Air Guard unit took part in a joint exercise using St. Croix, part of the United States Virgin Islands, as its base. Someone came up with the idea of inviting spouses and/or family along, and thus I found myself flying out of country for the first time ever to a little island I didn't know I needed to visit.

I'll admit, I don't really have a formal bucket list. But if I did, traveling out of country and then horseback riding on the beach would be two items on that list--and I was blessed to get to do both on this trip.

I've already covered two aspects of interesting colonial history associated with St. Croix, one connected with Denmark and one with our own Hamilton, but the one which got me most excited, and felt the most personal, was something I noticed while on that ride through the tropical forest on the island's west side.

It was my first chance to go trail riding in years, and I was already geeking out over getting to be on horseback on a Caribbean island. Then, at a bend in the trail, I looked down and saw these little green apple-like fruits, growing on a small tree that had fallen alongside the trail. 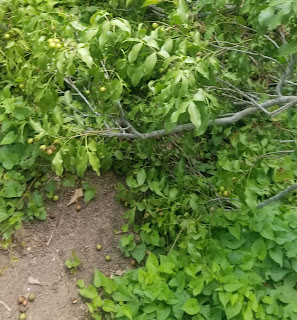 A memory tickled, of an incident I'd read in John White's account of the Roanoke Colony's passage through the Caribbean.
And why were they passing through the Caribbean, you might wonder? I'm glad you asked. It's because during the Age of Exploration, seafaring men knew it was better to take advantage of ocean currents that swirl in a great, clockwise motion from the coast of Europe, southward past Spain and Africa, sweeping around to the Caribbean, and then northward again along the coast of the New World.
Ships often stopped at the various islands for provisioning. And so John White reports an incident that I allude to in my recently released novel Elinor:

The 22 [of June] we came to an anchor at an Island called Santa Cruz, where all the planters were set on land, staying there till the 25 of the same month. At our first landing on this Island, some of our women, and men, by eating a small fruit like green Apples, were fearfully troubled with a sudden burning in their mouths, and swelling of their tongues so big, that some of them could not speak. Also a child by sucking one of those women's breasts, had at that instant his mouth set on such a burning, that it was strange to see how the infant was tormented for the time: but after 24 hours it ware away of it self.

... In this Island we found no watering place, but a standing pond, the water whereof was so evil, that many of our company fell sick with drinking thereof: and as many as did but wash their faces with water, in the morning before the sun had drawn away the corruption, their faces did so burn and swell, that their eyes were shut up, and could see in five or six days, or longer. [They did later find a spring high on a rocky hill.]

A small fruit like green apples ... ? I piped up and asked the girl leading our ride what the fruits were, and she said, "Oh, that's manchineel, and they're poisonous!"
Read more about it:  The Manchineel, or 'Death Apple," Is the World's Most Dangerous Tree
(Interestingly enough, the experience reported in this article mirrors John White's!)

Our guide went on to chat at little bit about this fruit you definitely want to avoid, and then went on to tell us that there was something else called a "ganip" that looked a bit like a small lime but was absolutely delicious. And before long, we ran across some. 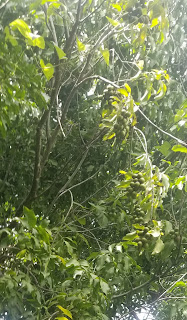 At our guide's urging, we all collected a few. I hesitated--here I was, an adult of somewhat older persuasion and uncertain digestive sensitivity; would sampling this out in the wild be a mistake? But then I decided to take the risk. The skin was tender and popped easily when I bit the tiny fruit--about the size of a Scuppernong grape--and when I squeezed the juicy pulp into my mouth, it reminded me in texture and taste of something between a mango and a peach. There wasn't a lot of pulp surrounding the pit, but our guide was right about how good they tasted. I had several.
And fortunately, I never suffered any digestive distress, either.
A few articles about ganips:

I wonder whether the English colonists thought they were getting ganips when they tried the manchineel?

But here was the thing. I'd completely forgotten whether John White had specified on which island this particular misadventure took place. But do you see it--Santa Cruz? That's the older name for St. Croix, the Spanish version of the name--and the people of the island still call themselves "Cruzan" after that name.

How cool to find that I'd walked shores where my Lost Colonists might have walked, ridden through a forest where they might have wandered.