Today, we're going to have some fun with your inner colonist as we learn to make a quill pen.
As a kid, didn't you ever want to make a feather quill pen to use? I bet you did. I bet you took apart your Bic, found a big ol' feather somewhere, and stuffed the ink tube from the pen inside to write with. I know I did. If you somehow missed doing that, how about as an adult? Now, of course, you know that stuffing pen parts inside a feather is not authentic. You want a real nibbed quill and an ink bottle on your desk. Seriously, I've found myself researching feather pens on Amazon. I have this one with interchangeable nibs (for style) on my wishlist:

Making Your Own
If you're feeling crafty, though, here's how to make a real feather quill pen. First, you need a likely feather. If you don't have access to someone's farm where you can get a pretty chicken or goose feather,  or you don't have any turkeys roaming around dropping the occasional feather, you can buy some nice turkey feathers online or in a craft store. Note how wing feathers curve. Whether or not you're left or right handed, the way they curve will feel better in one hand or the other. Back in the day, right-handed folks generally chose feathers from the left wing, and vice-versa for left-handed writers. They chose feathers from a bird's right wing. (Note: if you're going to chase down Granny's pet goose to nab a feather, keep this left-hand-right-wing, or right-hand-left-wing info in mind. Haha!)
Once you have your chosen feather, you need to prep it a bit. First clip off any of those soft, fluffy little feathers near the tip, and trim off any of the lower feathers that might get in the way of your holding the shaft. After that, it's time to strip the membrane. This part isn't 100% necessary, but it makes for a nicer "barrel". Just take a paring knife, and scrape the shaft along the barrel. You'll see the membrane coming off.
Good. Now it's time to cut the point on the end. You'll want to trim it at a nice angle, and make sure that you're cutting in the direction you want to be able to hold the quill to write most comfortably. Inside the end of the barrel is the "quick", kind of a like a plug. You'll need to remove that. Then you'll make a second cut to create the point. If you have trouble picturing this, think of the shape of tip on a fountain pen. If you want to make broader strokes, say for calligraphy, then you'll blunt the end a bit squarer. 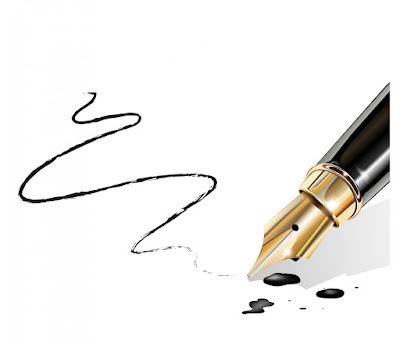 You have one more cut to make. After you've fashioned the tip, cut a slit in the middle of it so that the ink can run properly. Again, picture that fountain pen nib.
And that's it! You're ready to write. You'll need ink of course. You can order some, or you can squash up a few berries like some of those colonists would have had to do. I have a character doing that in my WIP, a sequel to Mist O'er the Voyageur. If you live in an area where you have black walnuts, those work good too.
Writing with Your Quill
Dip the tip of your quill in the ink of your choice, and give it a gentle tap to avoid drips. Make slow, easy strokes as you write, realizing that you'll have to re-load your quill every few words. Imagine how long it took Benjamin Franklin, Patrick Henry, Tom Jefferson, and so many of our other founding fathers to pen their lengthy documents! And if you lived in the mountains of North Carolina, there was only a small likelihood that you knew how to write at all. You would probably be just as mesmerized watching someone with that skill as we would be today--watching them write with a quill pen.
Send me a picture if you do this!
In the meantime...what are you reading? I hope you'll add my newly re-released, popular Empire in Pine series to your TBR, Goodreads, and BookBub lists. 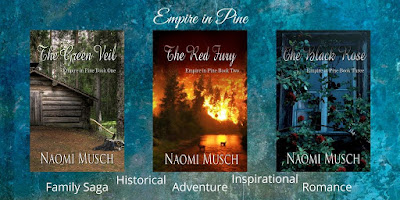 The Green Veil ~ The Red Fury ~ The Black Rose
by Naomi Musch
Here's to History,
Naomi
https://naomimusch.com/
P.S. As I completed this post, I discovered that this topic has been discussed before, in 2012, here on the CQ blog. If you'd like to see some step-by-step pictures and results from another crafty perspective, you can find that post here: Making Pens from Quills
Posted by Naomi Musch