In preparation for "Spies in Early America" class I'm teaching my home school group, I decided to get some quills. After all, if one is pretending to be a Revolutionary-era spy and will be writing secret messages in homemade invisible ink, obviously one ought to use a quill pen to do it! Right? Right. =)

The only problem is that, well, finished quill pens are a bit pricey. And since I listed my classes as "free," I wanted to keep costs to a minimum. As I perused the quill options online, something soon became clear--if I was going to provide quills to 14 students, I needed to buy them uncut, hence cheaply.

Sure. No problem. I could learn to cut quills. I mean, every person who knew how to write for centuries trimmed their own quills. This isn't a big deal. I'm a smart girl. I can figure it out. Right? Right?? LOL

So I ordered my nice set of a dozen black quills. And as I waited for them to arrive, I read up on the process online, visiting several sites to get the full scope of my project. And the more I read...the more I realized that 12 quills ordered for 12 students gave me absolutely no margin of error. Insert Roseanna taking a trip to Jo-Ann Fabrics.

I ended up with 6 colored quills for $2, the 12 black ones for $7, and a precision knife made by Fiskars. (Colonial folks would have used a pen knife. I, however, have not a pen knife. So I went with a sharp blade that still allowed for control.) And I no sooner got home than got an email saying my class size had increased to 14, so it was a good decision. ;-)

Then I set up my area. I was working on my old wooden desk, which I didn't want to score with my blade, so I put a cutting board down. Then I got to work preparing the quills. The first step is to shave off excess feathers, as you can see from the mound of colored fluff in the above picture. The idea is to make sure it sits comfortably in your hand without the barbs annoying you. I have tiny hands, so I didn't have much to worry about. But men would have to shave off more, for sure. And most people from days bygone would have stripped the quill entirely. For ascetics, I didn't do that here.

You'll also want to shave the feathers from the middle section of the quill, where they're really fluffy. I actually found that with the feathers I was using, if I took off all the fluffy looking ones from middle and sides, that was a good rule for how far to shave.


I then cut off all the tips of the feathers. This has to be done at some point, and one of the articles I read said to do it before tempering. Others said after. I see no big difference when you do it, so...whenever, LOL.

Then comes the tempering--this is when you harden your quill. The quill wears away with use, so if you start with a harder shaft, it'll last longer. You can soak them overnight in water to really help the process, but since these are for recreational use, I went straight to the heat tempering.

For this part of the process, you fill a can with sand and pop it in a 350-degree oven for about 15 minutes. Since I was doing so many quills at once, I used a cake pan. Once the sand is heated, pull it out of the oven and bury your quills in as far as they'll go.

Leave them in there until the sand has cooled. I did this part in the evening and left them until morning when I was ready to start working on them again.

Next comes the part I feared messing up royally--cutting. Getting out my handy-dandy precision knife again, I studied the diagrams and descriptions on the various websites and distilled it down to a few main steps.

1. Make a slice at an angle to take away about half the diameter of the quill.

2. Once you've opened the shaft, you can see that inside is a series of circular membranes. Get those out with the tip of your blade and, in the section beyond your cut, some little pokey thing. I used a cuticle shaper from a pedicure set, LOL.

3. Then you do the slices to form your nib. Start by making a slit parallel to the shaft and centered, from the tip up about 1/4 inch. This helps the ink flow to the point

4. Then you start shaping the point into a nib. Here are some pictures from various angles. 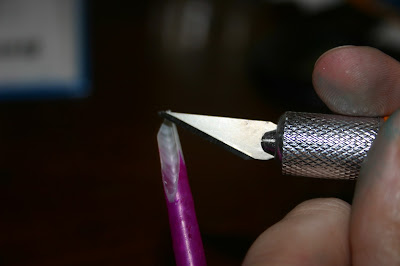 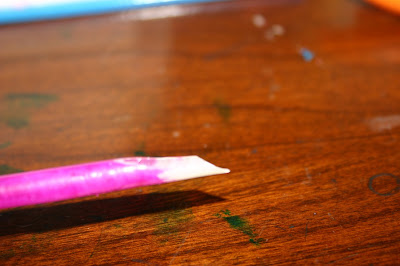 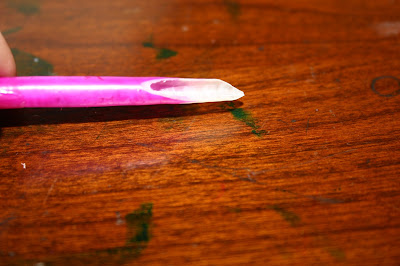 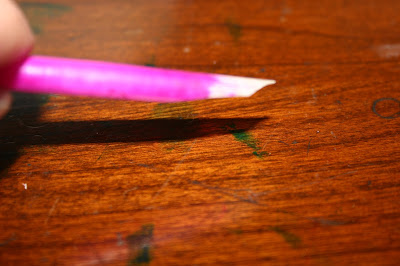 5. The final step is to work the point. I just pressed my blade to the tip, perpendicular to the shaft, to square it off. Then took it at an angle from both top and bottom to get the best edge.

As I practiced using them, I trimmed a bit here and there until I found the shape that made the ink flow best. And of course... 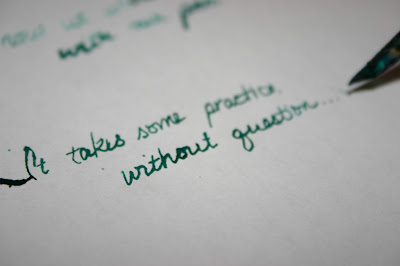