Tools of the Trade: Experimental Research I'm in the process of doing research for a historical spy novel. And boy is it fun! This being before the age of super spy gadgets, most espionage was conducted through secret messages. And some of those secret messages were written in invisible ink. Ooh, fun!
I did some basic searching on what they used for this stuff, how it worked, etc. First I found simple instructions on household items you could use to make invisible ink. Though my source didn't bother telling me what they looked like, what the ratio of substance to water should be, which developed best, etc.
Well, I decided, why not figure it out for myself?
Can you see me rubbing my hands together in delight? I can't remember the last time I did an impromptu science experiment that had nothing to do with my daughter's home school. I may have been heard cackling as I got out a piece of paper, a paintbrush, and then pulled out my spy tools.
Vinegar.
Lemon Juice.
Honey.
Sugar
Saliva (the least-gross of the recommended bodily fluids)
And of course, water.
Nothing gave me ratios, but I knew that the whole point was to dilute the substance so that it would not dry visibly on the paper, but only appear when heat is applied. So I mixed each substance with water (totally guessing on the recipe) and wrote a line with each, just the name of which substance I was using at the time.
Imagine me fidgeting while it all dried, and wondering which would make the paper wave the least. Though that was more a matter of silly me using too much, I think . . .
Finally we were dry. Because I'm just so silly, I got out my pot of ink, my glass stylus (no quill right now, though I used to have one) and wrote a "real" message too. Time to develop!
These are all heat-revealed, and one resource recommended a light bulb, an oven, or an iron. But come on--who had those on a battlefield (Or in this era in general, if we're talking light bulbs)? I turned on my gas stove (no matches handy for a candle, LOL) and held out the paper.
Nothing.
I help it closer, just briefly. Waved it over the flame.
Nothing.
Grrrrrrrrr. I know this works. So swallowing my fear of burning the whole house down for a stupid experiment for a novel, I take the paper closer. I can smell the paper heating. I watch it begin to discolor above the flame. And there! Words appear. 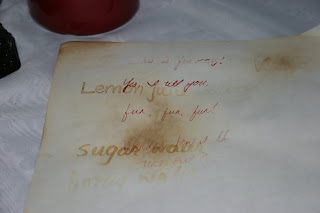 "Lemon juice dilute."
Yay! We have a winner! Not to give up on the others so easily, I moved the paper and watched "Sugar water" appear next. Along with a smoky brown spot that made me think any amateur spies had better practice this a few times to learn how to best develop without burning the message whole. ;-) Also learned that these must not have been the inks used in National Treasure, because they sure don't disappear again, LOL.
Later that night I had my chemistry-inclined hubby help me figure out some of the more complicated inks, but I gotta say, this impromptu experiment was a ton of fun!
Happy researching to you all! ;-)