Of Flip and Syllabub

Some of the spirituous liquors favored by our forefathers remind me of our modern coffee craze. According to a sweet little book in my parents’ possession, Little Pilgrimages Among Old New England Inns by Mary Caroline Crawford, copyright 1907, “Our forefathers, it must be remembered in explanation of this, knew nothing of the luxury of hot tea and coffee and so if they would drink anything but water [often unsanitary], malt beer and other spirituous drinks had to be supplied and dispensed by somebody.” 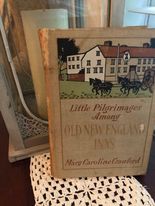 Taverns rose to this occasion, often famed far and wide for particular drinks. Brigham’s Tavern in Westborough, Massachusetts, made mulled wine of a quart of boiling hot Madeira, half a pint of boiling water, and six frothed eggs, sweetened and spiced. “Nutmeg was a favourite flavoring and fashionable young ladies and elegant gallants always carried the delicate dainty in their pockets.” The Shepard Inn of Bath, Maine’s shipping city, served hot toddies and gin fizzes at a little window in the front hall. Other taverns concocted beers boiled with roots and herbs, spruce or sassafras bark, or pumpkin and apple.

Every landlord swore by his way of making flip. The Compleat American Housewife 1776 by Julianne Belote gives one recipe. In a pitcher, mix 2/3 full of strong beer, adding enough sugar or molasses to sweeten. Fill with about half a pint of rum, then heat the mixture by stirring with a red-hot poker. Says Pilgrimages: “The loggerhead, more commonly called the flip iron, was a regular part of the chimney furniture in ‘ye olden time:’ it was constantly kept warm in the ashes all ready to impart at short notice the puckering bitterness and curious scorched taste beloved of our ancestors.”

The Compleat American Housewife highlights another sweet Colonial libation, syllabub, a Christmas favorite. Amelia Simmons’ recipe called for sweetening a quart of “cyder” with sugar, grating in nutmeg, and then milking your cow directly into the liquor! Next, pour half a pint or more of sweet cream over it. Those who are financially able may use white wine instead of “cyder” and beat it with their cream for half an hour.

I experienced my first syllabub at the Moravian tavern in Old Salem, North Carolina. I must say, I wasn’t expecting quite so much “cyder.” LOL! 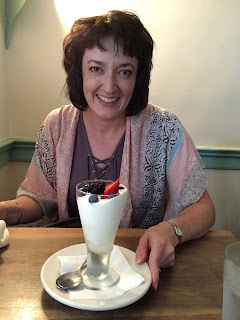 How about if I close today’s post with a sneak peek of a scene from A Secondhand Betrothal, my romance set on the Georgia frontier which my agent is currently shopping? Incidentally, it mentions both syllabub and nutmeg in this scene where the heroine, Esther, is Christmas shopping for the family that has taken her in after a tragedy.

“Can I help you, ma’am?” Mr. Moore gave no indication he recognized her as the daughter of his previous competitor. Just as well. She’d rather him assume she was a guest of the Lockridges, perhaps a relative.

“Have you white sugar and wheat flour?” She whispered the question. Tabitha’s dried apples would make a wonderful cake, and Esther had not forgotten Jared’s reference to syllabub. While the Lockridges took their corn to the grist mill on the Apalachee—a luxury compared to the hand mill Liam had expected Esther to use to grind their dried corn, and acorns when that meager supply dwindled—even they seldom acquired wheat flour on the frontier. The best gift she could give this family would be something they would all enjoy.

Mr. Moore caught onto her secrecy, his bushy brows shooting up, then nesting above his shining eyes as he whispered back. “I do, but it comes very dear.” He named the price, and Esther swallowed hard.

She twisted the ring off her finger. She’d gained enough weight that it no longer threatened to fall off. “Would this be enough for a pound of each … and one of those?” She nodded toward several nutmegs displayed in a nearby wooden bowl.

“Why … I’d say so. I don’t get much jewelry here, and rings that can be used for weddings are even rarer, but ma’am …” He took the circlet to examine it. “Are you sure?”

Esther nodded. “I am sure.” She picked up the top nutmeg and shook it, satisfied by the rattle of kernels in the shells covered by their streaked reddish coat of mace. The seeds had sufficiently dried to make their highly prized powder.

“Have you something we can hide your purchases in?”

She held out a cloth satchel looped over her shoulder, strung under her cloak.

“Very good. One moment while I fill your order.” 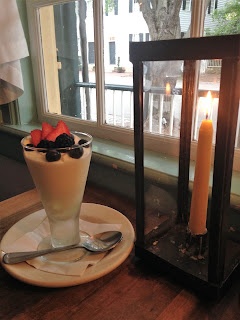