I’m going to share with you a tich of history that some Canadians are probably more familiar with than most Americans are, but given what it led to, the impact was felt across the North American continent—and in Europe as a whole.
In 1650, in Wivenhoe in Essex England, a small ship was built christened Nonsuch (Other such battle ships were given the name later on.) The original Nonsuch, a ketch, which is a two-masted ship carrying square sails, was commissioned by the Navy as HMS Nonsuch, meaning “unequaled”. During it's time in the navy, the ship was captured by the Dutch, but eventually it was put on the market and sold to Sir William Warren in 1667 for 298 Pounds (that’s 71,000 British Pounds today, or $98,000 USD). This is when its story takes an interesting turn. 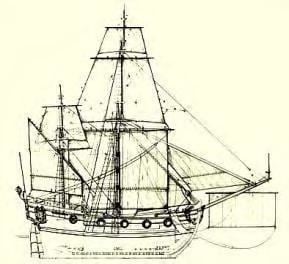 Sketch of a replica of the Nonsuch. Photo credit: Alchetron, the Free Social Encyclopedia

Sir William purchased the ship on behalf of a group of men, including England's Prince Rupert, who were interested in exploring Hudson’s Bay for the possibility of establishing trade. They specifically selected the Nonsuch because of its small size, capable of traversing the Atlantic while also being easier to navigate on Hudson Bay and James Bay. It's size also made it possible to be removed from the water in winter to avoid being crushed by ice.

The ship was captained by Zachariah Gillam, a man from Virginia who belonged to a family of New England sea captains. He later became infamously involved in trade in a number of ways, both legally and illegally. He was probably involved in the incident known as Culpeper’s Rebellion, though it was unable to be proven in court, and he was in Virginia at the time of Bacon’s Rebellion and reported the burning of Jamestown. But I digress.

The Nonsuch began its new epoch at a critical moment in history. Two storied explorers I’ve written about before, Pierre Esprit-Radisson and his brother-in-law Medard Chouart, Sieur Des Groseilliers, had already scoured the best routes to get into the region. In the process, they hauled back a profitable cache of furs for France. Though they had probably saved the infant French colony from financial ruin, they were fined, and Des Groseilliers was tossed into jail. Go figure. Upon his release, the pair decided to abandon France and head to England for support of their discoveries instead.

King George II was intrigued by their proposition to outfox France to delve deeper into the area for trade via the Hudson Bay route. This, at the very moment when the financiers of the Nonsuch, who included the king’s cousin Prince Rupert, were preparing their plans.

The ship was captained by Zachariah Gillam, a man from Virginia who belonged to a family of New England sea captains. He later became infamously involved in trade in a number of ways, both legally and illegally. He was probably involved in the incident known as Culpeper’s Rebellion, though it was unable to be proven in court, and he was in Virginia at the time of Bacon’s Rebellion and reported the burning of Jamestown. But I digress.

Captain Gillam was given orders by Prince Rupert to follow the succinct instruction of Radisson and Groseillier for the journey, and the ship set sail from Gravesend on June 3, 1668. 118 days later, September 29th, Captain Gillam dropped anchor in the southern end of James Bay near the mouth of the river he promptly named for Rupert. There, the crew built a cabin and weathered a long Canadian winter, but during that time they were discovered by Cree Indians who came to trade. By the following year, they returned to England with enough beaver pelts to prompt the formation of the Hudson Bay Company—which has been in operation ever since—and which led to the formation of other competing companies such as the Northwest Company, the XY Company, and John Jacob Astor’s American Fur Company.

The battle for conquest of the New World's resources was heavily underway, and it all began with the Nonsuch and men who envisioned an empire.

To reflect the history and heroic efforts of the fur traders, the Hudson's Bay Company commemorated those events in 1970 by building a replica of the Nonsuch. To tour the rebuild and see it's contribution to the Manitoba History, and to get a glimpse of replica Nonsuch in action, watch the video.

P.S. If you'd like to know even more history about the Nonsuch, here's an even more in-depth video: https://www.youtube.com/watch?v=2n_83JqlgI4
Posted by Naomi Musch