Old Tools of Lumbering and Homesteading from By-Gone Years

Recently two paper mills owned by the Versa Paper Company were shut down in Wisconsin and Minnesota. One was in my hometown in central Wisconsin. It was a fixture there for decades before I was born (under different names) and the primary employer in the city. The other was in Duluth, not far from where I've lived most of my adult life. Hundreds of people lost their jobs. 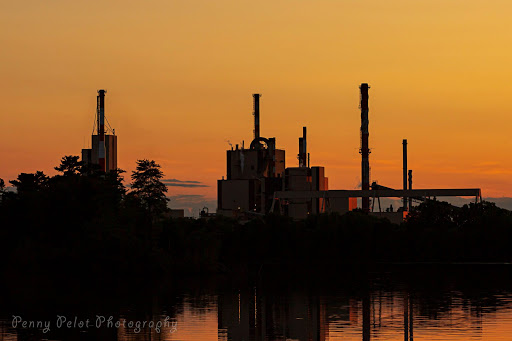 TWILIGHT OF VERSA PAPER MILL, WISCONSIN RAPIDS
Photo by Penny Pelot Photography
It's hard for me to imagine such a decades-old industry just closing it's doors. Paper mills have been a part of our nation's economic infrastructure since its inception. In fact, logging's roots in America stretch back to the early 1600s. Begun by the driving need of lumber for shipbuilding, the role of logging expanded with the industrial revolution. The first American paper mill was built in Germantown, Pennsylvania in 1690--although at that time paper was mostly produced from rags and other materials, hence the popularity of stories with the word Ragpicker in the title. That's also the reason my mom, a retired school teacher, used to warn her students against chewing on paper (a bizarre childhood habit of some): "because it might have been someone's dirty underwear." Thanks for that imagery, Mom. I've never forgotten. 😬
By the mid-1800s the process of making paper from pulp wood was established. (Whew! Go ahead and chew your notebook, if you're so inclined.)
Soon settlers moved westward, and the broad ax became a staple tool of every man, both for carving his farm out of the forests and for cutting the logs he'd use to build his home.
Nowadays, logging is still a hundreds-of-billions of dollars-per-year business, so it sends shock waves through a community when a huge mill closes its doors. Everything has its time and its purpose though. Hopefully some entrepreneur will open the mills again.
All that brings me to a continued look from last month's post about old tools. Today I have some pictures to share of a few old logging tools here on our farm. This first one we bought at an auction when we were first married. Living here in the north woods, in the very land of Lumberjacks and Tall Tales, this tool has, no doubt, seen its share of use. At our house, its merely meant for hanging on the wall for decoration. 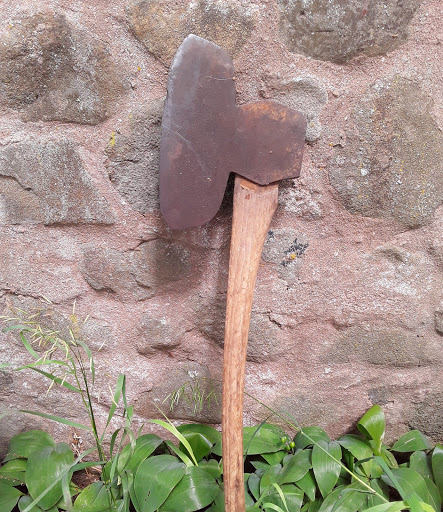 BROAD AX
This thing is weighty! It takes a lot of muscle to wield it. This will soon be hanging on the wall behind our wood stove. 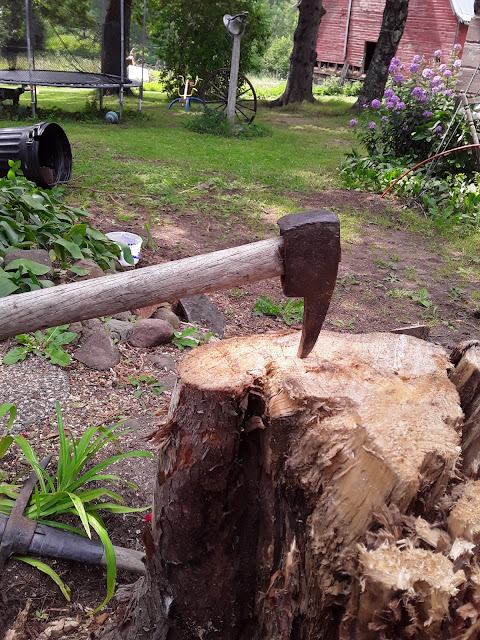 PICKAROON
This is an interesting type of pick. Rather than have an ax opposite the pick head like a pickax, it's back end is flat. A pickaroon is used for easier handling of cut logs known as rounds. My husband has been using this to chip away at this giant cedar stump. Every now and then, our grandsons come along and give it a few whacks too. If the stump is ever gone, this little pickaroon is going on the wall with the broad ax. 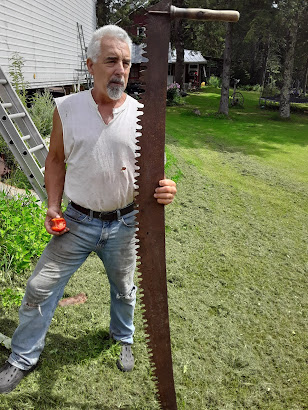 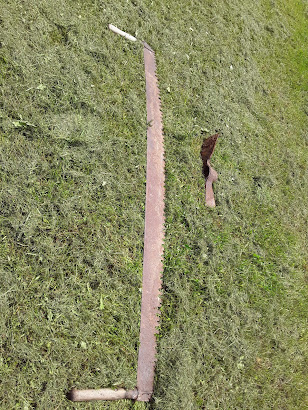 TWO-MAN CROSSCUT SAW
You might not recognize this man-about-the-farm (my hubby Jeff), but you'll likely recognize the fact he's holding a two-man crosscut saw. Can you imagine the work it took to cut down those big trees back in the day? This item will soon be on our living room wall. (That's a honey-do job, Jeffrey.) The mystery item next to it in the grass is shown closeup below. 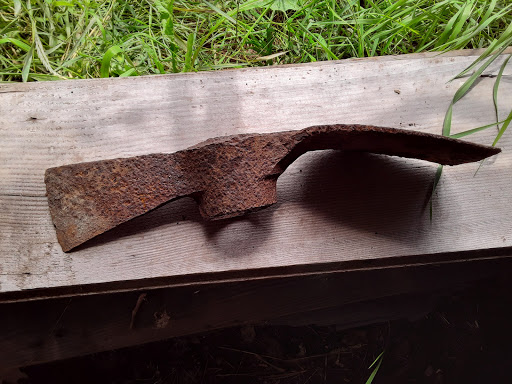 MATTOCK (head)
This was a real find! Jeff found this out in woods, beneath a layer of soil, where he happened to be getting firewood. Who knows how many years this mattock head lay buried there? A mattock is pick on one side and adze on the other. It's used for digging, prying, and chopping. A great tool, not only for loggers, but for homesteaders clearing a bit of ground. I'm happily accepting ideas for a cool way to display this piece or re-purpose it. It's heavy!
Like many paper mills these days, these tools are largely retired. You can still purchase modern versions of some that come without the reminisce factor. A couple of other old logging tools I'd like to get a hold of are a cant hook and a peavey. I could've sworn we had a cant hook somewhere, but apparently I imagined that. With slight variations, both are tools that consist of a handle with a swing hook and are used for gripping, moving, and separating logs. In my novel The Green Veil, the hero, Manason Kade, and his crew use these tools for their work, though when it comes to giving some no-good tree-thieves their comeuppance, they depend mostly on their brawn. 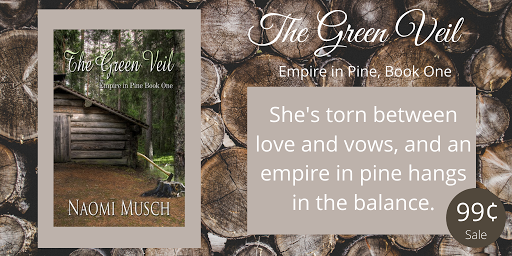 I didn't set out originally to collect logging tools, but it became an interest as I wrote set within the parameters of my state history. Have you ever begun any collections in an unusual way?
Enjoy your summer!
Naomi
Posted by Naomi Musch