Wonders of the Colonial Frontier: the Landscape of South Carolina

Early explorers of America found a wonderland whose description almost defies belief for those of us used to the tamed, populated landscapes of the eastern seaboard. A particular gem of reference exists in A History of the Upper Country of South Carolina by John Henry Logan, published in 1859. He writes, 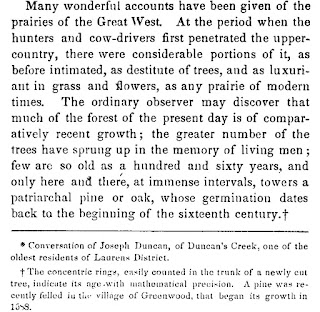 The Great West here is, believe it or not, a reference to upstate South Carolina. Logan goes on to say,


It is well known that in the primitive history of the country, there were numerous prairies in the corresponding parts of Virginia and North Carolina.

He describes meadows full of peavines as tall as the back of a horse, and canebrakes (a variety of bamboo) extending for miles along the waterways. Cane, in fact, was used as a gauge for the richest soil for farming. If the cane only grew to the height of a man, it was passed over, but where it grew 20 to 30 feet, that was considered prime farmland. (Thus where the Long Cane District around Ninety Six, South Carolina, and others, got its name.) And anyone familiar with the hardwood and pine of the Carolinas--did you know those were more recent growth? 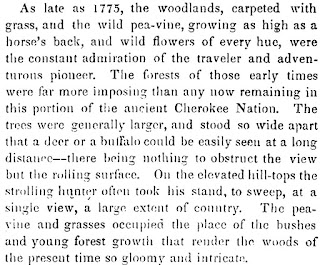 
The partizan (sic) soldiers of the Revolution, in Upper Carolina, frequently spoke of this striking feature of the country. It sometimes favored their enterprises, but as often proved the cause of premature detection and defeat.

Even Cornwallis, while wintering around Winnsboro, South Carolina, in 1780-81 commented on the beauty of the landscape around him. 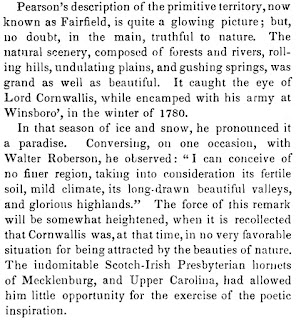 The wildlife populating this country was just as wondrous--but that's another subject for another post!