What's in a name?

As a writer of Colonial fiction, one of funnest things to do is choose names for characters. More and more I see the huge influence the Puritans had on what became common names in the American colonies. They also had a lot of names that didn't rise in popularity as some of the Bible names did, but still hold a lot of meaning...and sometimes a chuckle (like 'Search-the-Scriptures', 'Joy-in-sorrow' or 'Sorry-for-Sin') 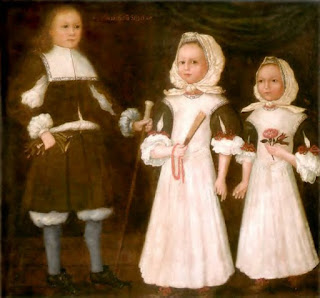 Here are a few of my favorites:

(Really, any virtue you can think of...including Virtue!)

I had a lot of fun in The Scarlet Coat, the first book in my Hearts at War series, as the hero remembers nothing about who he is at the beginning... not even his name. Rachel Garnet, weary of having nothing to call him, hopes that if he hears his name he might recognise it.

“How about Thomas?” she asked.
He shook his head.
“James, Andrew, Simon, John?”
“Are you listing common British names or the Apostles of Christ?” He smiled at her.
“Well, you do seem to be Christian, and they are quite common names here. I’m not British—at least, not anymore—so you tell me which names are popular in England.”
“No, let us continue with this.” He flipped through the pages of the Bible. “You are correct. I am Christian. I do not remember it, exactly, I simply...I know it. My belief in Christ seems to run deeper than memories or thoughts. It is the core of who I am, as though I would cease to exist without that sense of faith in the Lord. For ‘who shall separate us from the love of Christ? Shall tribulation or distress or...’” He looked to her with a sheepish smile. Pulling himself up a little more, he redirected his attention back to the Bible. “Shall we continue? What are some of the other names?”
The sizzle of batter meeting a hot skillet was followed by a mouthwatering aroma.
His stomach pinched and churned. Had it been most of a day since he had eaten last? The pain in his thigh had been distracting enough until now.
“Do you want them from the Old Testament? There’s Adam, Jacob...Ezekiel, or, perhaps,” she flashed him a grin, “Nebuchadnezzar?”
“Nebuchadnezzar? Do you really think that fits?” He shook his head. “Perhaps we should start with the New Testament. I am sure you agree I look more like a Herod or Pilate?”
“I wasn’t planning to say anything, but I think you’re right.” She shot him a disapproving glare. “We’re wasting time. Let’s be serious."
“I thought we were.”

Thanks for joining me today! Let me know in the comments what your favorite Colonial names are. 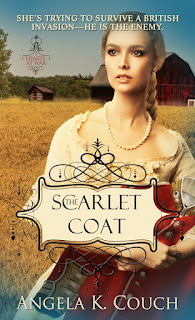 A Woman Compelled by Christian Charity
Surrounded by the musket fire of the American Revolution, Rachel Garnet prays for her family to be safe.  When the British invade the Mohawk Valley, and her father and brother don't return from the battle, she goes in pursuit of them. She finds her brother alive but her father has been killed at the hand of the enemy. Amidst the death, how can she ignore a cry for help...? Rachel reluctantly takes in a badly wounded British officer. But how long can her sense of Christian duty repress her hatred for his scarlet coat?

A Man Lost to the Devastation of War
Passages of Scripture and fleeting images of society are all Andrew Wyndham recalls after he awakens to the log walls of his gentle prison. Even his name eludes him. Rachel Garnet insists he is a captain in the British army. He mourns the loss of his memory, but how can he hope to remember war when his “enemy” is capturing his heart?

Now available for preorder on Amazon!

Angela K Couch is an award-winning author for her short stories, and a semi-finalist in ACFW’s 2015 Genesis Contest for her Revolutionary War novel that will be published by Pelican Book Group. As a passionate believer in Christ, her faith permeates the stories she tells. Her martial arts training, experience with horses, and appreciation for good romance sneak in there, as well. Angela lives in Alberta, Canada with her “hero” and three munchkins. www.angelakcouch.com
Posted by Angela K Couch