Thomas Jefferson and the Pursuit of Truth 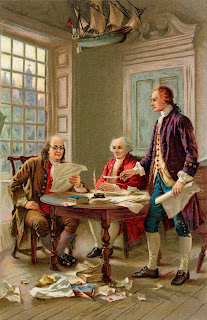 "In the same hour came forth fingers of a man's hand, and wrote over against the candlestick upon the plaister of the wall of the king's palace: and the king saw the part of the hand that wrote."
Daniel 5:5


Approximately 538 BC, a new king ruled Babylon, Belshazzar the son of Nebuchadnezzar. A young man who appeared to have ideas different from his father and who was in love with his prosperity.

At the conclusion of his life, Nebuchadnezzar wrote:


"Now I Nebuchadnezzar praise and extol and honour the King of heaven, all whose works are truth, and his ways judgment: and those that walk in pride he is able to abase." Daniel 4:37

Nebuchadnezzar experienced the humbling press of God's hand on him and gained knowledge. Made a madman, he ate grass like the beasts until he knew that the most High God ruled the kingdom of men, giving it to whomsoever He will. He learned God's sovereignty.

His son, however, seemed not to have learned from his father. Belshazzar made a great feast. He took the holy items his father had taken from the house of God and used them in the worship of gods of gold, silver, brass, iron, wood and stone. He denied the one true God as worthy of honor and worship, and exalted man-made objects in His place. In essence, mocking God.

At the changing of a king, God proved He was still in control. He put out His hand and proclaimed:


"...God hath numbered thy kingdom, and finished it....Thou art weighed in the balances, and art found wanting...Thy kingdom is divided, and given to the Medes and Persians." Daniel 5:26b-28

Belshazzar had believed falsehoods and errors about his gods and about the One True God. He seemed ignorant of the humbling his father endured before Nebuchadnezzar acknowledged all God's works are truth and that God makes abase the proud. Because of his vanity, Belshazzar was slain that night.

God sees America today. He knows whose minds are filled with falsehoods and errors and who knows truth. He knows who has denied Him for the gods of wealth and prosperity and fame and power, and who hasn't. God knows the heart of each citizen in minute detail, and He knows the waves of society washing against the sands of truth.

Election day is coming, and America will make a decision about the direction it will go. Each voter has or will make a choice based on his perception of truth. When the votes are numbered and finished, when our decisions regarding the future of our country is weighed in the balances, will America be found wanting?

This is a country that holds high the banner of separation from church and state. Yet the core of each person's values and beliefs determines the decisions he makes. You cannot separate a person's true faith from his actions. If your action denies the faith you proclaim, then you did not have that faith. True faith in God lives and breathes through the conversations (words and actions) of those who place their trust in Him. If you don't obey and hold to the truths of His Word, your faith is lacking.


"Even so faith, if it hath not works, is dead, being alone. Yea, a man may say, Thou hast faith, and I have works: shew me thy faith without thy works, and I will shew thee my faith by my works." James 2:17-18

On November 6, what will your ballot say about your values and beliefs? Will God look at it and find you wanting--find that you do not acknowledge God and the truth He lays out for every area of life (from conception to eternity) and society (from law, to justice, to fashion, and more) in the Scriptures?

Our country is already divided. The question is, will God give us to the Medes and Persians...will we find ourselves in further captivity and taken further from the "Promised Land" many colonialists believed America would be?

I tremble for my country when I reflect that God is just.
Thomas Jefferson