Some time back I wrote about my quest to find and try hyson tea, a variety popular during the colonial and Federal eras of our country's history (apparently Thomas Jefferson was a fan) and mentioned in the material accounts surrounding the Harpes. (It's good! Very much like other modern green teas.)

My latest research nerdiness led me to yaupon (YO-pahn), a type of holly which grows wild across the southern United States and the only known source of caffeine native to North America. The berries are poisonous (although by some accounts the native peoples would eat them after boiling for 8-9 hours) but the leaves were steeped and drunk for both social and ceremonial occasions. 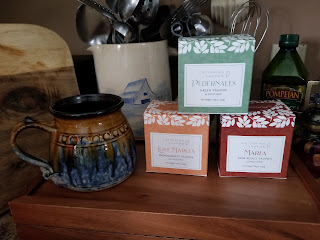 The plant would later be categorized Ilex vomitoria for its reputation as an emetic--native peoples would brew it for hours and drink it by the gallon as a stimulant and purgative. But prepared as a "normal" tea and consumed in smaller quantities, it's said to be packed with antioxidants, even more than traditional green teas. It's even rumored to help with high blood sugars and other health issues. At some point in my research months ago, I added a sampler pack to my Amazon gift list and then--forgot about it.

One of my dear daughters-in-law gifted me with the tea for Christmas, though, and so I was beyond excited to try it:  Yaupon by Catspring Tea in three varieties:  green, medium roast, and dark roast.

Surprise! It really is as smooth as they claim. Because it doesn't contain tannins, it never developes that puckery taste and feeling that black teas get from steeping too long. But warning--this is not a bedtime tea! A week or two ago I needed a cuppa to shake off an after-nap groggy feeling, and opted for the green tea (so far it's my favorite). Well, it was so efficient at banishing my sleepiness that I wound up being wide awake until well after midnight!

Yaupon may not be as high in caffeine as coffee (or so the websites say) but it also contains theobromine, a substance in chocolate. It's also one of those rare brews that tastes better as it ages!

So that's my experience with a now-obscrure tea that was likely offered to the English explorers and the Lost Colonists by their native hosts. It was almost certainly used as well in preparation for wartime and coming-of-age rites.
If you're interested in reading more about this staple beverage that once threatened the global tea trade, try any of these articles:
NCPedia: Yaupon
Yaupon: The rebirth of America's forgotten tea
Ceremony, Medicine, Caffeinated Tea
The Yaupon Holly Tradition
Yaupon: Historic Tea Reborn
Yaupon Tea Caffeine Content 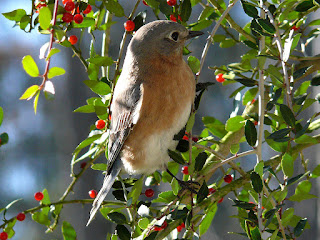