I grew up in central Indiana on my grandfather Jacob Bontrager’s farm in northeastern Howard Township in Howard County. Over the years my father collected a number of Native American arrowheads that were turned up as he plowed the fields. I got them after my parents died and for a long time they sat on a bookshelf in a box. After spending years doing research on 18th century Woodland Indians for both my American Patriot and Northkill Amish series, one day I finally decided to display them in a shadow box. It occurred to me that it would be nice to label them, and so I began researching the different types of Native American arrowheads.

That turned out to be more of a challenge than I hoped. For one thing, several are broken off at the base. Others have additional damage that makes identification difficult. Even more confusing, there are multiple variations of each type. However, early on I was able to identify the arrowhead on the left above—my favorite—as a St. Charles dovetail from a chart on this website that has pictures and detailed descriptions of many different kinds of projectile points. For the specific page, go here. At least I’m fairly confident that’s what it is because this type appears to have been widely distributed throughout Indiana, and that would date it to as old as 7,000 years.  Pretty impressive. The one at the right may also be a St. Charles. Its top fits the profile of the longer, skinnier variants, though with the base missing it’s impossible to be certain.

I’m guessing the three arrowheads below probably also fit into the Dovetail category, but I need to study the other charts of Indiana points more closely. The one on the left is the smallest in my collection—about half the size of the other two and closer to a third of the first one. 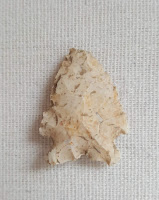 I also found a lot of helpful information about Indian Weapons and Tools here, including a simplified chart of arrowhead types though it doesn’t include information about the artifacts’ distribution as the first one does. There’s a wealth of additional information on Native Americans and on the process of making arrowheads on this site as well.

Here’s the rest of my collection, which I intend to research as I have time while writing the last book of my American Patriot series, Forge of Freedom. The last, which is missing a base, is the second smallest I have. Expert opinions as to which type each of these is will be greatly appreciated!

Do you have a historical collection of some sort—arrowheads or other Native American artifacts or objects from your heritage? Please share a description of some things you treasure!
~~~ J. M. Hochstetler is the daughter of Mennonite farmers and a lifelong student of history. She is a professional editor, a publisher, and the author of award-winning historical fiction whose books have been endorsed by bestselling authors such as Lori Benton, Laura Frantz, and Jocelyn Green. Her American Patriot Series is the only comprehensive historical fiction series on the American Revolution. Book 6, Refiner’s Fire, released in 2019, and one more volume, Forge of Freedom, will complete the series. She is also the author of One Holy Night, the Christian Small Publishers 2009 Book of the Year, and co-authored the award-winning Northkill Amish Series with Bob Hostetler.