The Use of Oxen in Colonial Times by Cynthia Howerter


During a visit to Colonial Williamsburg several years ago, I encountered a man driving a pair of yoked oxen down Duke of Gloucester Street. The late Darin Tschopp was not only a caring oxen driver, he was also an excellent teacher with a vast knowledge of oxen and their use in colonial America. 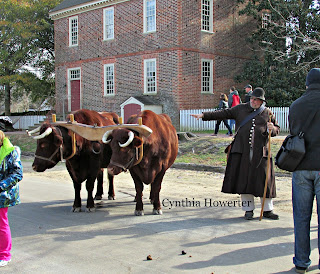 Having never seen oxen before, I stopped and listened as Mr. Tschopp spoke to onlookers about his team. 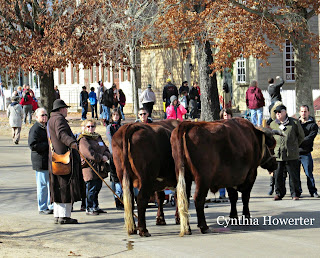 Like the rest of the gathering crowd, I stood well away from the bovines, mostly because their horns looked intimidating and they were huge animals, but also because I lacked knowledge about the temperament of such powerful-looking beasts. 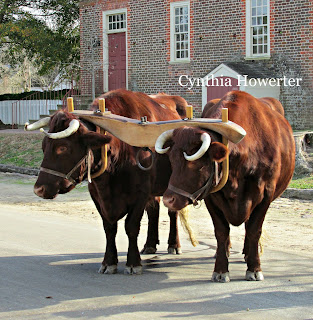 Mr. Tschopp explained that oxen are gentle, but I was dubious until a young boy stepped forward. The animals stood still and contented while the lad stroked their heads and ears. This was a point of favor with the colonists who needed animals to perform all of the heavy labor without being aggressive to their handlers. 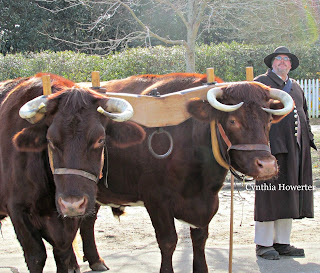 Mr. Tschopp explained that oxen are smart. Capable of learning twenty verbal commands, training begins when they are calves. Small yokes pair two young oxen together to get them used to working as a team. Unless something happens to one, the same two are generally always teamed together. As oxen grow, they're given light loads to pull that don't cause injuries to the still immature bodies. They reach maturity at about four years of age. After that, it's their job to handle heavy chores.

Because of their size and strength, colonists used oxen for strenuous work on farms and in towns. On another visit to Colonial Williamsburg, I observed a team of oxen yoked to a cart loaded with firewood. I took the photo below after the cart had been emptied next to a summer kitchen. 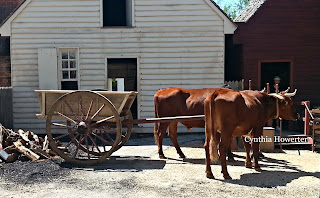 Settlers in the colonies' backcountry discovered that Indians were less likely to steal oxen than horses. On farms and plantations, oxen's great strength enabled them to pull heavy objects like downed trees and bulky stones as well as drag plows through fields. Capable of pulling several tons, oxen teams transported supplies for the Continental Army during the Revolutionary War over rough terrain and crude paths that served as roads. Washington's army depended on these animals.

Eventually, Mr. Tschopp and his team made their way to a small field at the edge of town where I observed these beautiful animals responding to their master's commands. The oxen driver used no whip on the animals, just words which he spoke in a gentle but firm manner. 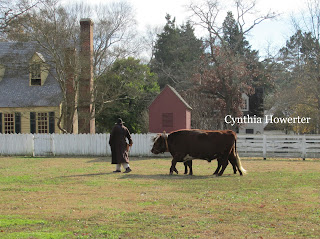 In memory of Colonial Williamsburg's oxen driver Darin Tschopp
who allowed me to observe that gentleness comes in all sizes.
1966-2014

Award-winning author Cynthia Howerter grew up playing in Fort Rice, a Revolutionary War fort owned by family members, and lived on land in Pennsylvania once called home by 18th century Oneida Chief Shikellamy. Hunting arrowheads and riding horses at break-neck speed across farm fields while pretending to flee from British-allied Indians provided exciting childhood experiences for Cynthia and set the stage for a life-long love of all things historical. A descendant of a Revolutionary War officer and a member of the Daughters of the American Revolution (DAR), history flows through Cynthia's veins.