Do you dance, Mr. Darcy?

"What a charming amusement for young people this is, Mr. Darcy! There is nothing like dancing, after all. I consider it as one of the first refinements of polished societies."

"Certainly, sir; and it has the advantage also of being in vogue amongst the less polished societies of the world; every savage can dance.”


That is taken, as most can guess, from Jane Austen's Pride and Prejudice. And, as aptly stated, every "savage" can dance. And colonist, too, for that matter.

So what were the colonial's kicking their heels to as they settled the Americas? 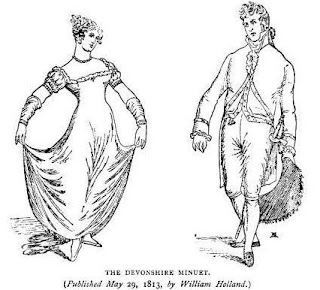 Hornpipes—sprightly, free-form solo dance pieces—it seems. At least at the very beginning. But, as the colonists sought to emulate the culture in England, where dancing was very popular, homes, taverns, and official buildings hosted balls. Soon, good dancing became associated with good breeding. If you really wanted to impress someone, a dance like the minuet, with its more complicated moves requiring balance and coordination, would be important to master.

Besides the minuets, other "fancy dances" consisted of allemandes, hornpipes, and such.

Then there were "country dances." They often included jigs and reels—more loosely structured dances derived from the traditions of Africans and Scots. Some of these were later formalized for the upper class, as well. 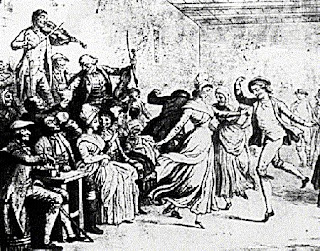 In America, more than just maneuvering around one's partner was seen on the dance floor. In the time leading up to and during the American Revolution, dancers used the ballroom to make political statements. Their dress, choice of partners, and selection of dances were all employed. Wearing a homespun gown or suit to a ball demonstrated an alliance to the patriot cause, as did refusing to dance with Tories. The ballroom sometimes gave colonial women an unusual amount of power, since they were encouraged to make conversation with men. They could thereby voice their opinions without stepping outside the bounds of acceptable female behavior.

But even the men had statements to make. Unlike in England where aristocracy was entrenched and well defined, Colonial society was far more fluid. The nouveau riche were everywhere, and a hefty pocketbook could buy your way into the upper class provided you fit in socially...or, in other words, you could dance. A difficult task for many newly rich who hadn't received the same training as those born to wealth. The dance master became a gatekeeper into "polite society."

While dancing was definitely an enjoyable activity for many in America, with all the pressure to perform to meet society's expectation, I do not doubt that some shared a certain Englishman’s sentiment:

Excited to announce this month's release of Dancing Up a Storm, an anthology with my short story, "When I'm Gone.

Summer 1942. Just before the competition that could launch their careers as professional ballroom dancers, Elaine Mathews’s partner, James Larson, gets drafted into the army. Now, with her dreams and the man she loves hanging in the balance, Elaine must acknowledge what she’s most afraid to lose.

Angela K Couch is an award-winning author for her short stories, and a semi-finalist in ACFW’s2015 Genesis Contest for her Revolutionary War novel that will be published by Pelican Book Group. As a passionate believer in Christ, her faith permeates the stories she tells. Her martial arts training, experience with horses, and appreciation for good romance sneak in there, as well. Angela lives in Alberta, Canada with her “hero” and three munchkins.