By Susan F. Craft
Author of the Xanthakos Family Trilogy 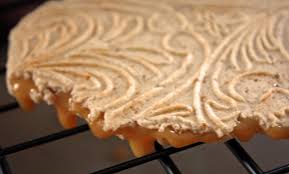 People of Dutch descent ate nieuwjaarskoeken or knieperties – crisp cinnamon flavored wafers topped with whipped cream. The wafers were heated in special wafer irons that imparted a design on both sides of the cake.
In many of the colonies, young women got together, prepared a large bowl of wassail and carried it from house to house, sharing the warm drink with their neighbors and receiving small gifts in return. This was called “wassailing.” Wassail is the name of a heated, spiced ale. The name comes from the Middle English, waes and haeil, meaning “health to you.” The drink consisted of mulled (i.e. heated) cider or ale, with sugar, ginger, cinnamon and other spices mixed in. Pieces of toast would be floated on the top of the bowl. 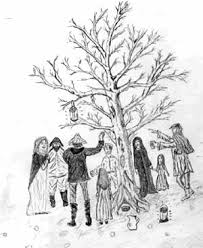 “Apple-howling” involved taking a wassail bowl into an orchard, encircling a tree, and while rapping the tree with sticks chanting the following:


Stand fast root, bear well top,
Pray God send us a good howling crop;
Every twig, apples big;
Every bough, apples enou;
Hats full, caps full, Full quarter sacks full.
“Nog money” involved Scots children going from house to house on New Year's Eve begging for bread and cheese.
The usual New Year's gift was a capon. Another gift that was commonly given was an orange with cloves stuck in it. A ribbon would be tied around a fresh orange, and then the entire exposed surface would be covered with whole cloves and then dusted in cinnamon. 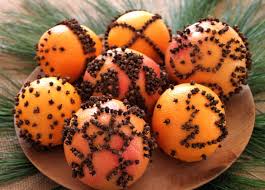 Colonists of German and Swiss descent ate sauerkraut on New Year’s Eve. Made of cabbage that has been fermented through the process of pickling by lactobacilli, sauerkraut derives its name from the German words for “sour” and “cabbage.”
Southern colonists ate “Hoppin' John and greens” on New Year’s Day. This dish consists of black-eyed peas mixed with rice, onion and fried bacon slices served with the leaves and stems of either mustard, collard or turnip greens. (This is still a tradition in the South.)

An old Scottish New Year’s Blessing
May the blessing of light be on you - light without and light within. May the blessed sunlight shine on you like a great peat fire, so that stranger and friend may come and warm himself at it. And may light shine out of the two eyes of you, like a candle set in the window of a house, bidding the wanderer come in out of the storm. And may the blessing of the rain be on you, may it beat upon your Spirit and wash it fair and clean, and leave there a shining pool where the blue of Heaven shines, and sometimes a star. And may the blessing of the earth be on you, soft under your feet as you pass along the roads, soft under you as you lie out on it, tired at the end of day; and may it rest easy over you when, at last, you lie out under it. May it rest so lightly over you that your soul may be out from under it quickly; up and off and on its way to God. And now may the Lord bless you, and bless you kindly. Amen. 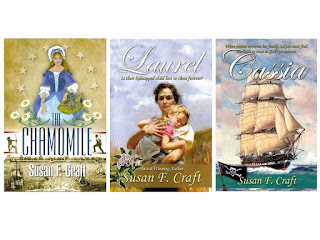 Susan F. Craft is the author of the Xanthakos Family Trilogy that spans from 1780 - 1835 and from the Blue Ridge Mountains, to Charleston, SC, to the NC Outer Banks.