I’m so pleased to present this interview with Lori Benton, debut author of Burning Sky, featured in last week’s Tea Party. Lori was born and raised east of the Appalachian Mountains, surrounded by early American and family history going back to the 1600s. Her novels transport readers to the 18th century, where she brings to life the Colonial and early Federal periods of American history, creating a melting pot of characters drawn from both sides of a turbulent and shifting frontier, brought together in the bonds of God's transforming grace.


When she isn’t writing, reading, or researching 18th century history, Lori enjoys exploring the mountains with her husband – often scouring the brush for huckleberries, which overflow the freezer and find their way into her signature huckleberry lemon pound cake.


What got you interested in the colonial time period?


Stumbling upon good fiction set during that time period, and the movie The Patriot, with Mel Gibson. Those two things collided at the right time, and made me determined to write a hero who wore knee breeches. I wish I could claim something more profound than that as the start of all this, but it certainly led to much less frivolous reasons for my continuing interest in the 18th century.


What inspired your latest colonial work? 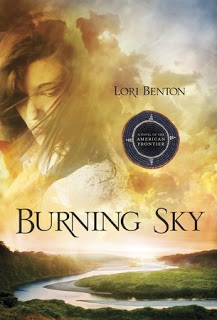 Burning Sky, my first published novel, is set in 1784, right after the Revolutionary War. It’s a complicated answer, what inspired it. I’d been researching late 18th century American history for about four years before I began Burning Sky, working on a novel set in 1790s North Carolina. But my attention kept being drawn to the Mohawk Valley of New York. The conflict in that colony during the Revolutionary War was intense, with particular animosity raging between patriot and loyalist Americans. Along with the conflict European Americans were experiencing, the Haudenosaunee (the Six Nations of the Iroquois), who had lived on that land for generations, ended up drawn into the conflict as well—not all on the same side. For a time, the Iroquois Confederacy ceased to exist as brother fought against brother.


I saw this setting, and still see it, as fertile ground for the type of stories I love to tell, stories of men and women caught between worlds (races, cultures, upbringings, beliefs)—often with loved ones facing them across the divide. After I’d decided on the setting and time period, I simply had to wait until a character showed up. It wasn’t long before Willa Obenchain came striding over the mountains, heading home.


Do you have a favorite colonial place you like to visit and why?


Living in Oregon makes it hard to visit colonial places. I have a long wish list of them I’d like to visit. A few years ago I had the pleasure of touring the late 18th century home of General George Rogers Clark, Locust Grove, in Louisville, KY. I’ve also in recent years visited a historic home in North Carolina, the Alston House, which retains the bullet holes around its back door from a Revolutionary War skirmish that took place there.


I’m familiar with that skirmish from my own research! Do you have a favorite colonial recipe you enjoy and would like to share with readers?


I’d love to share my succotash recipe. The mixture of ingredients is far older than colonial, though. It’s the type of meal (with a few modern additions) the Iroquois often made of their three staple crops: corn, beans and squash.

Fry bacon. Preserve drippings in pan (up to about a Tbs., more if you love bacon, as this will flavor the vegetables and beans). Set bacon strips aside. Add about a Tbs. of cooking oil to the pan, if needed. Sauté chopped onion and minced garlic until onion is tender. Add corn and tomatoes. Sauté a few minutes. Add chopped zucchini and yellow squash.* Sauté until tender. Add beans, salt, pepper, and basil to taste. Stir until heated through and mixture is cooked to your satisfaction. Crumble the bacon and sprinkle on top, or stir it in too. Serve warm. Makes 3-4 servings


* Feel free to modify ingredients/portions. Substitute different types of beans and squash, or something else entirely. Add a bit of vegetable broth. You can even make it sans bacon, though I never shall. Enjoy!


Abducted by Mohawk Indians at fourteen and renamed Burning Sky, Willa Obenchain is driven to return to her family’s New York frontier homestead twelve years later. At the boundary of her father’s property, Willa discovers a wounded Scotsman lying in her path, and is obliged to nurse his injuries. The two quickly find much has changed during Willa’s absence—her childhood home is in disrepair, her missing parents are rumored to be Tories, and the young Richard Waring she once admired is now grown into a man twisted by the horrors of war and claiming ownership of the Obenchain land.


When her Mohawk brother arrives and questions her place in the white world, the cultural divide blurs Willa’s vision. Can she follow Tames-His-Horse back to the People now that she is no longer Burning Sky? And what about Neil MacGregor, the kind and loyal Scottish botanist who does not fit into her plan for a solitary life, yet is now helping her revive her farm? In the aftermath of the Revolutionary War, strong feelings against “savages” abound in the nearby village of Shiloh, leaving Willa’s safety unsure. As tensions rise, challenging her shielded heart, the woman once called Burning Sky must find a new courage—the courage to again risk embracing the blessings the Almighty wants to bestow. Is she brave enough to love again?

GIVEAWAY! Please leave a comment, including your email address, to win a copy of this most excellent story.
Posted by Shannon McNear