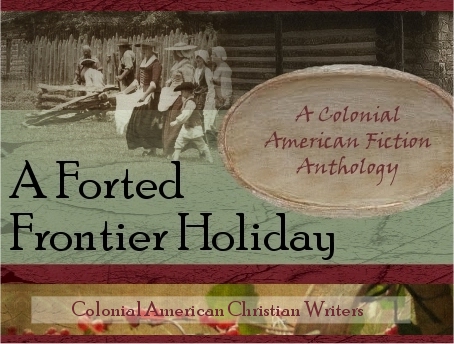 While harvesting, the German settlement near New Market, Virginia, receives warning of an impending attack by French and Indian war parties. They flee to a quickly cobbled refuge, Fort Providence—for they will surely need to rely on God’s Provision. The forted colonials long to celebrate the holidays and await the arrival of visitors.

The End, Part 2
Look for Part 3 of A Forted Frontier Holiday on Nov. 19th.

Giveaway:  A copy of Susan F. Craft's award winning book "The Chamomile" will be given away to one commenter.  Drawing will be done November 23 and announced that day at our Tea Party.  Skip Black Friday shopping, put your feet up, and enjoy tea and colonial treats with us instead!

A history lover, Susan F. Craft researches for her novels with the same excitement as Alan Quartermain hunting for King Solomon’s Mines and with the persistence of Lewis and Clark. She enjoys the chase when a clue leads her from one “treasure” to the next, to the next .... Her novel, The Chamomile, a Revolutionary War romantic suspense, takes place in Charleston, SC. Susan, who lives in Columbia, SC, has a degree in Broadcast Journalism. Her 40-year career includes working for SC Educational Television, the SC Department of Mental Health, the SC College of Pharmacy, and currently for the SC Senate. This is the fourth book she has authored. The first two were S.C. State Library award-winning professional works in the field of mental health, and the third, published in 2006, was A Perfect Tempest, a historical fiction set in Columbia during the Civil War. Susan is represented by Linda Glaz of Hartline Literary Agency.