Cotton Mather - Preacher to the Pirates!

On Friday, 20 June 1704, Cotton Mather and another minister, as well as “Forty Musketeers, Constables of the Town, the Provost Marshall and his Oficers,” accompanied the condemned pirates to the place of execution. In An Account of the Behaviour and Last Dying Speeches of the Six Pirates, he wrote:


Being allowed to walk on Foot through the Town, to Scarlets wharf, where the Silver Oar being carried before them; they went by Water to the Place of Execution being Crowded and thronged on all sides with Multitudes of Spectators.


Cotton Mather made it his life's goal to preach to condemned pirates with the intent of saving their souls for all eternity.  He often visited them in prison, reading Scripture to them and exhorting them to come to a true repentance for their sins before their execution. A diary entry in April 1699 read:


After the other public Services of the Day were over, I visited the Prison. A great Number of Pyrates being there committed, besides other Malefactors, I went and pray’d with them, and preach’d to them. The Text, in which the Lord helped mee to Discourse, was Jer. 2. 26. The Thief is ashamed, when hee is found. I hope, I shall have some good Fruit of these Endeavours.

But who was this Cotton Mather? Born in 1663, the eldest son of a prominent preacher in Boston, he grew up believing in hard work and living a Godly life. He learned to speak and read Latin, Greek, and Hebrew. Science intrigued him to such a degree that in 1713 he became the first person born in America to become a member of The Royal Society in England.   At age eleven, he was the youngest person admitted to Harvard College where he studied medicine and theology.

His doctrine, or fundamental belief, was that “If we Mark the Ways of Wicked men, which is indeed, an old Way, we shall find in it some things that are truly Remarkable.”  The truths he found "remarkable" in each of the condemned men he visited were: 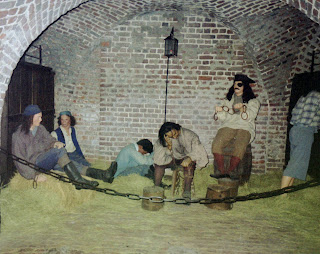 Over his years, Cotton ministered to hundreds of condemned pirates. Most repented. Some never did. One of the most famous of those men who refused to see the light was a man by the name of William Fly, a 27 year old sailor who staged a mutiny on board the slaver, Elizabeth in 1726. After killing the captain and first mate, they took over the ship and became pirates, feasting on any ship that happened their way. After Fly's capture and speedy trail, he was quickly condemned to death by hanging.

Mather then described two meetings he had with the convicted pirates. Their first conference took place six days before their executions. Although doomed men, Mather assured them they could still be saved – “Tho’ you have been so wicked overmuch, that the Sword of Justice can do no other, than Cause you to Dy before your Time, yet there is Mercy with God for you, if you Return to Him. . .the great God is Angry with you…. You are within a very few Days, to be thrown into those Hands, which if you dy in Ill Terms with Heaven, you will find it a fearful thing to fall into. Now, tis only in the Way of repentance…that you can be saved from the inconceivable Miseries…. "

After several meetings , and try as Cotton Mather did, he failed to turn Fly toward God. 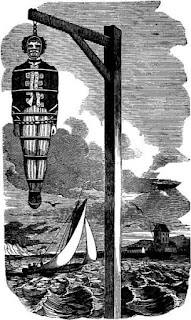 The final segment of The Vial Poured out upon the Sea (an account of the proceedings)  involved the execution. Mather bid Fly “to Speak, what he should judge proper to be spoken on that sad occasion….” Instead of confessing or warning others not to tread the path he had, Fly said, “he would advise the Masters of Vessels to carry it well to their Men, lest they should be put upon doing as he had done.” Remaining defiant to the end, Fly died on 11 July 1726, at the age of twenty-seven, and his “Carcase hanged in Chains, on an Island, at the Entrance into Boston-Harbour.”

Cotton Mather was sixty-three when he counseled William Fly. The Vial Poured out upon the Sea was his last narrative that focused on condemned criminals. He took seriously his job of ministering to sinners before they departed this life.

Cotton Mather was the most prolific writer of early American literature, yet few of his 469 published writings have appeared in print since his death in 1728. He craved knowledge, and when he died, he owned one of the largest libraries in America.