Tools of the Trade: Taking Flight to Write

A while back I went to Charleston for some extensive research for an early 19th century novel I was writing, and during the July 4th weekend I'll be heading back to research a colonial story taking a new set of characters from Scotland to colonial Charleston. 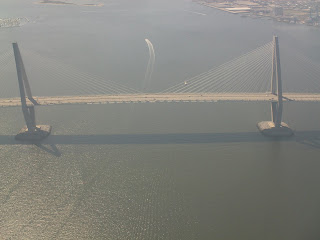 I've been pouring over historical maps and comparing them to current maps, but nothing beats an arial view of everything, so I took a flight tour over Charleston, SC. While street names change, houses are torn down and new ones built, buildings and bridges that didn't exist now do, the layout of the land, and how the ocean flows through the channels and how the rivers lay don't change as much. It was a beautiful mixture of history and present-day culture from a broad view that many don't get a chance to experience. I was able to see how my characters would arrive to shore from the sea in their sailing vessels. Plus, such an adventure ignites the fire of writing that is bound to remove any serious case of writer's block.
The photo to the above is of the Cooper River Bridge. It opened in 2005, replacing Pearman Bridge, which opened in 1966 as a means to assist with the weight limit that was assigned to the Grace Memorial Bridge, which was opened in 1929. 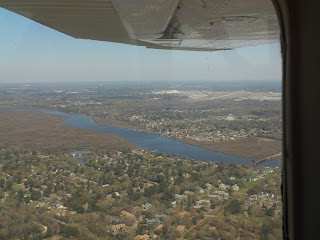 This is the Ashley River. It was magnificent to see how it lays across the land. It was named for Anthony Ashely Cooper, 1st Earl of Shaftesbury and chief Lord Proprietor of the Carolina Colony. Charleston was actually founded in 1670 on the western bank of the Ashley River at Charles Town Landing, not the peninsula location, it's current location, where it moved ten years later. 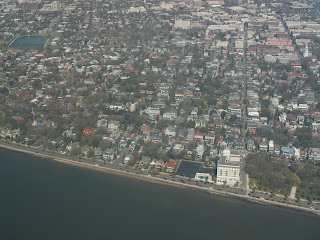 This is Historic Charleston and Battery Street, which is lined along the harbor. Some of these homes are a couple of centuries old. It's hard to believe they've survived hurricanes, earthquakes, floods, and weathered the test of time. Many have been restored as they would have looked during the height of the colony.
As I prepare to write my story, I can just imagine what it was like back then. Chalmer Street still has the cobblestone road and some of the street lamps that look just like the gas lamps they had back in the Victorian period. And with all the carriage tours around the city, old church bells ringing, one can easily imagine living and existing in those by-gone days. This is exactly the type of mind-set I need to be in when I sit down to write my story.
Research doesn't have to be confined to books, maps, and Internet searches. Once in a while, we can spice it up with creativity. What one thing have you yet to try that you'd love to do?