The Romance of the Native American Courtship Flute

Romance
Here are some lines near the end of a scene in Mist O'er the Voyageur, my novel set on Lake Superior at the height of the fur trade. Of course, you'd enjoy it more reading the whole scene, but just hang with me here for a moment:

René pulled air into his lungs. He grasped her face in his hands again. Laughed, sobered, and kissed her well.

Many minutes later, they walked hand-in-hand along the shore. The moon rose higher. In the distance, the silhouette of Bemidii playing on a flute trilled soft notes into the night.

After I wrote Mist O’er the Voyageur, I learned more about Native American courtship flutes or "love flutes" as they were also called. I had already decided the character Bemidii in the scene above needed to have his own story told, so imagine my delight when Bemidii meets someone for whom to play his love flute. Then I wrote my new novel Song for the Hunter, which is coming out January 4, 2022. 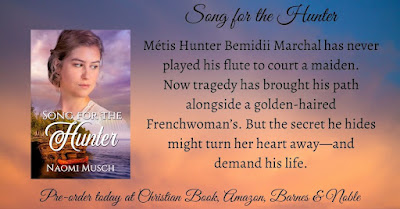 But I should back up.

Love Flutes
While the flute itself is an instrument used in many cultures around the world for ceremonies, rituals, celebration, and entertainment, the courtship flute is primarily a cultural icon of the Native American Woodland tribes. Courtship was a very public activity, and the flute was the means for the young man to convey his feelings and intentions to the young woman he was interested in. He might stand outside the young woman's abode in the evening and woo her with his song. Courtship rituals from tribe to tribe varied, but generally, once the woman accepted the man's advances (which she was not allowed to do alone) the two would be joined, and in an incredibly romantic bit of symbolism, the flute would be destroyed. Some say that the man would give the flute to the woman and she would break it so that he could never play his flute again for someone else. A Native American maker-of-flutes I spoke to at a rendezvous several years ago said that the man would place the flute into the fire, showing that he had given his heart and was forever finished searching for love elsewhere. Whichever way the act was done...oh, my, my! Isn't that lovely?
Flutes were and still are considered sacred among Native Americans. Being carved from a living tree, the player identified closely to his instrument as an extension of himself both bodily and emotionally. Women didn't play flutes historically, but today they might if they are given special permission from a tribe elder.
There are some beautiful examples of courtship flutes and some stunningly romantic paintings of the ritual online, but I didn't want to share them here due to copyright. PLEASE, do a search or check out Pinterest. So cool!
Here are several other articles that will tell you more about the courtship flute.
Five Things You Didn't Know About Native American Flutes
Native American Courting Rituals: The History of the Lakota Love Flute (video)
Native American Courting Flute (Wisconsin Historical Society)
Meet and Greet
Have a lovely Thanksgiving month, everyone. If you're free on Wednesday, November 10th, it's my birthday, and I'll be hosting an Author Meet and Greet on the Journeying with Jenny Facebook page. I have it on my own good authority that I'll be doing a couple of giveaways, so I hope you'll stop in and say hello!
Naomi Musch
https://naomimusch.com/
Posted by Naomi Musch