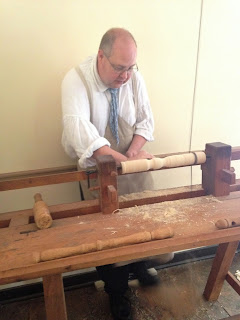 During early Colonial times, American woodworkers relied heavily on British tools for their trade. While English woodworking items might be of superior manufacture, importing and distribution costs made them prohibitive for many.

As the colonies separated from England, Americans dedicated themselves more and more to making their own implements. Some, such as wooden squares, bevels, and gauges, proved easier to construct than others. Artisans also made their own vises, sawhorses, lathes, tool chests, and benches and called on blacksmiths for additional items. Plane-making surged in New England, saw-making both there and in Philadelphia, and the Kern family of the Shenandoah Valley, Virginia, grew a reputation for both tool-smithing and plane-making during the late eighteenth and early nineteenth centuries. 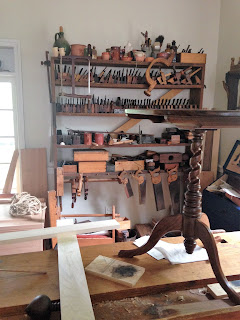 Traditionally, the carpenter cut and joined lumber into buildings; the joiner fitted pieces of wood to create farm and kitchen implements, window frames, staircases, and cabinetry; the turner worked with the turner to fashion chair and table legs on a lathe; and cabinetmakers taught apprentices to master techniques such as the dovetail and mortise and tenon and applied finishes to furniture.

However, woodworkers in rural areas might do everything from barn-building to farm equipment repair to making furniture. Some supplemented their incomes with farming. While the contents of their tool chests limited many of these Early American woodworkers, the demand for less practical furniture grew. 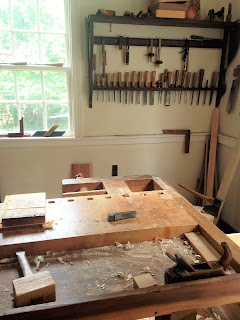 The ladder-back chair was the easiest chair style to produce, although its cylindrical parts called for chisels and gouges as the wood was spun on the lathe, its splats required several saws and a plane, and its seat was formed with a drawknife. Maple was a favorite for chair legs, as it was easily turned. As you might recall from the opening of the Mel Gibson movie The Patriot, the Windsor chair was among the most difficult to construct properly. And formal side chairs were even more time-consuming and necessitated special tools.

Blanket chests were made by dovetailing flat boards together to form a box to which a top and feet were added. On desks and chest-of-drawers, the visible surfaces were often made of fine hardwoods such as walnut or mahogany, while drawer interiors and the back of furniture might be constructed of softwoods such as pine or poplar. Carpenters favored pine for house interiors since it could be sawn, planed, and carved quickly, while they often employed easily split oak for barrels and wagon parts.

What tools were used? The list would be so exhaustive, we can merely skim the surface here. The axe and the saw were, of course, staples of the woodworker. The crosscut saw required two laborers for coarse work such as felling trees and sawing logs and beams to length. Pitsaws sawed logs into boards, a job soon mostly overtaken by sawmills. Americans preferred open-style saws to frame saws. Open handsaw styles included dovetail, panel, tenon, coarse, carcass, and sash. 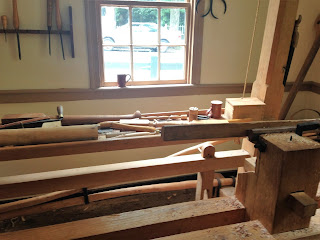 Chisels and gouges were used to pare wood to size, shape joints or the wood on a lathe, and create designs. Chisels might be either tanged (tapered) or socket (heavy-duty) style. Gouges came in both tanged and socketed designs with curved-out blades.

Today, we can deeply appreciate the woodworkers who forged a living from the native forests of America and the beautiful pieces they left behind. I took the photos accompanying this article at the woodworking shop in Old Salem, North Carolina, when I was researching my novel, The Witness Tree. The hero in an upcoming novel, A Secondhand Betrothal, is a woodworker, scout, and farmer on the Georgia frontier. 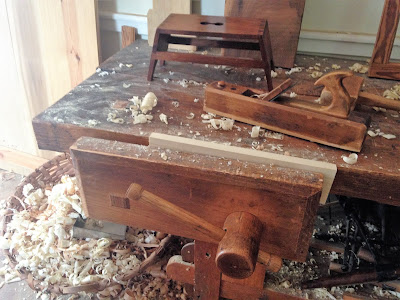 For more information: With These Hands They Built a Nation: The Story of Colonial Arts and Crafts by Lois Lazarus and Tools: Working Wood in Eighteenth-Century America by James M. Gaynor and Nancy L. Hagedorn.