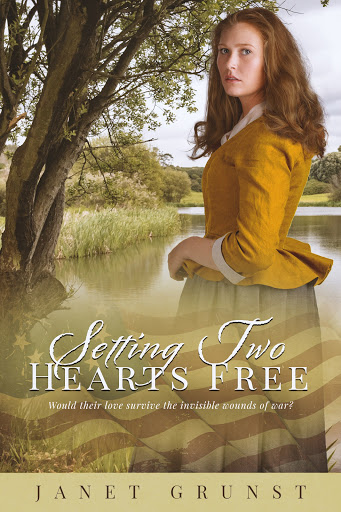 SettingTwo Hearts Free, the third story of my Revolutionary War series releases October 6th, 2020. For those who haven’t read A Heart Set Free or A Heart For Freedom, this is a stand-alone story.

This story picks up in 1781 five years after A Heart For Freedom ends and focuses on the younger generation. The war is winding down but the danger and challenges the characters face haven’t—and some will last long after leaving the battlefield.

Emotional, psychological, and some physical injuries may not be obvious but they have been with mankind since the beginning of time. It took until the late seventeenth century for the invisible wounds of war to be identified and those names varied depending on the war.

What we now refer to as Post Traumatic Stress Disorder (PTSD) was eventually accepted as a diagnosis in 1980. It can result from any incidents that cause intense anguish. It can begin during or after the event(s), be of short, periodic, or long duration, and be triggered unexpectedly by a myriad of causes.

Those who suffer from it can experience various problems such as loss of appetite, sleep disturbances, insomnia, physical weakness, anxiety, apathy, heart palpitations, irritability, fever, and depression.

The two main characters, as well as others, experience life-changing trauma in Setting Two Hearts Free:

Donald Duncan joined the Patriot cause for noble reasons, battling the British while enduring deprivation and hardship on every side. The war has changed him, and now the battle is internal. Returning home to Virginia is in sight where a new life and his Mary wait for him.

Mary Stewart spends the war years with her family at Stewarts’ Green, helping them operate their ordinary. Daily, she prays for Donald’s safe return, eagerly waiting for him … until that day the evil side of war touches her.

Two hearts changed by a war that dragged on for six years. Two hearts left hurting and struggling to find the love and trust they once knew. Is there a path for them to rekindle what was lost, Setting Two Hearts Free?

Setting Two Heart Free is dedicated to all who suffer the invisible wounds of war and other trauma. And to their families and loved ones, sometimes struggling to best know how to help and cope.

A Heart For Freedom ~ Christian Inspy Award for Historical Fiction