The “Great Fires” of American History—and the Deadliest of All: Peshtigo

Springtime is notoriously one of the worst times of year for wildfires. Here in places like the one where I live, the snow is gone, but the greening up hasn’t begun in earnest. The ground is covered with dried leaves and brittle pine needles. Branches and other wooded detritus make for tinder that needs only a spark to ignite. Here in Wisconsin, in fact, the Department of Natural Resources has suspended burning permits for the foreseeable future. The concern is that, since more wildfires begin in the spring, eliminating ignition sources on the landscape will reduce the wildfire risk which can lead to more person-to-person contact and possible higher vulnerability to certain populations during the Covid-19 pandemic.

Viruses aside, this got me wondering about the so-called “Great Fires” that raged across the land and our nation’s early history.

There is a lot of study and speculation about whether or not and why those native to the continent may (or may not) have used burning to clear the forests. We do know for sure, however, that when the first European settlers came to this continent, it didn’t take long for fire to begin taking its toll on the colonies.

In January 1608, a devastating fire destroyed most of the colonist's provisions and lodgings. Captain James Smith made a concise assessment of the situation:


"I begin to think that it is safer for me to dwell in the wild Indian country than in this stockade, where fools accidentally discharge their muskets and others burn down their homes at night."

In 1736, Benjamin Franklin—who had a lot of first-hand knowledge of volunteer fire-fighting by this point—founded the Union Fire Company in Philadelphia, which became the standard for volunteer fire company organization in many other places. And firefighting was needed all throughout the colonies.

November 18, 1740, Charleston, South Carolina suffered a horrendous conflagration fueled by turpentine, tar, and rum that moved quickly, swallowing up wharves, commercial buildings, and houses in its path. The wasn’t Charleston’s first licking by fire. Founded in 1689, “Charles Towne” experienced its first blaze in 1698 and lost one-third of its settlement’s buildings. The city went on to suffer other fire catastrophes in 1778, 1788, 1796, 1799, 1810, 1819, and 1826.

Elsewhere, meanwhile, the night of September 20th, 1776, fire burned New York’s West Side at the southern end of Manhattan Island. This was during British occupation of the island during the Revolutionary War, and there was much debate and blame cast over whether the fire was started by the British or the revolutionaries. 10-25 percent of the buildings in the city were destroyed and other parts were plundered in the chaos.


In spring of 1788, fire swept through New Orleans, destroying 856 of its 1100 structures. If that first “Great Fire” wasn’t bad enough, only six years later, another fire roared through the area now known as the French Quarter destroying 212 more structures, including the jail, in what became known as the Great Fire of 1794. The schooner Nuestra Señora del Cármen, anchored off-shore, was rented as a jail for several months following.

The 1800s saw fire’s devastation in many American cities and across its vast countryside. New York, Philadelphia, St. Louis, San Francisco—and who could forget Chicago—saw the massive affects of fire on populations crowded together in wooden structures. In all of these fires, there was some loss of life, making the stories even more tragic.


But of all the fires of our history, none was so destructive and deadly as
The Great Peshtigo Fire.


Peshtigo—called the worst wildfire in history—happened when?
In 1871, on the night of October 8th.

But isn’t that the night of the Great Chicago Fire, you ask?
Why, yes, it is.

But I’ve not heard of this fire, you say.
That is highly probable, because Chicago was a much bigger city, and resources had been directed from Wisconsin to Chicago to help.

Meanwhile, tiny little Peshtigo, in the northeast corner of the state near Lake Michigan, not only saw 1.2 million acres go up in flame, but the entire town was turned to ash, and more than 1152 people were killed, compared to Chicago’s loss of life of some 300. Many estimates say that the Peshtigo death toll was likely closer to 2500, and some say 3000. It was difficult to account for the many lumberjacks, railroad men, farm family immigrants, and others who populated the north woods and were itinerant.


Horrifically, the Peshtigo Fire claimed more lives than any other forest fire in US history, before or since. Many of those people lie together in a mass grave. Many others’ bodies dissolved to ash and were never recovered, such was the total annihilation across the landscape. 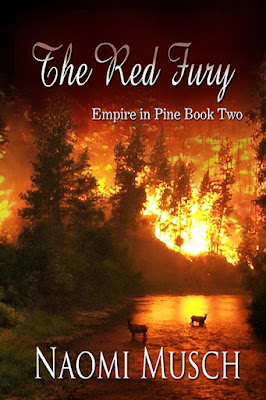 I have always wanted to tell Peshtigo’s tragic story through the eyes of characters in a work of fiction. Using the recorded stories of several actual survivors and other historians, I’ve tried to be true to their accounts, while also sharing a love story. My novel THE RED FURY re-released this week. I hope you’ll visit my website, or check out the book on Amazon to learn more about it.

The characters in The Red Fury are some of my favorite I’ve ever written. When lumberman’s daughter Lainey Kade, and brothers—Civil War veterans—Zane and Kelly Beaumont, stepped into my writer’s heart, I felt as if they were actually there in Peshtigo, in the past.

The Red Fury can be read alone, but it would be better to read The Green Veil first. 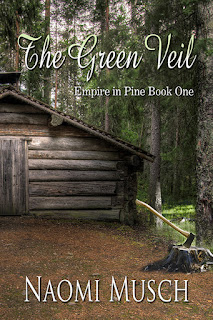