Legend of the Flying Canoe ~ A New Year's Cautionary Tale


To celebrate the New Year in an Old World way,
I'll share with you a brief retelling and embellishment of the


Legend of the Flying Canoe
or La-Chasse Galerie
a cautionary tale of French Canadian folklore, originally written by Honoré Beaugrand in 1900, based upon other legends.

Many years ago, on a deep winter's night in Canada, New Year's Eve to be exact, seven lumberjacks dreamed wistfully of their loved ones back home in Quebec. The snow had fallen steadily all the day long until it was so deep the men ceased their work, exhausted. They could only huddle around the fire and imagine the good times their loved ones were having in their celebrations.

"I am afraid someone will steal my beloved Élise and marry her while I am away," his nephew Martin bemoaned. "I would go there and remind her of my love, if only I could."

"Oui. We would go." A murmur of assent by all the lumberjacks went up to the sky with the sparks of their fire.

"But how?" said one of them. "The rivers are frozen. Snow lies thick across the roads. Even the trees shiver with the cold. We would freeze to death." 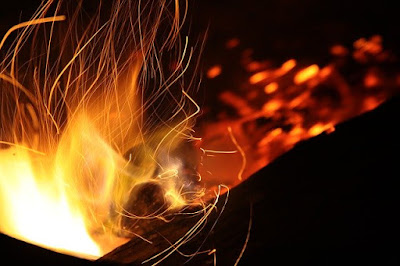 That's when a howl raised in the distance, and soon the panting of a tall gray wolf could be heard just beyond the ring of firelight. The beast stepped into the light. "So you want to go back to your sweethearts, eh?" His voice was gruff and sly. "I can make it so for you. I can send you in a magical bark canoe that will fly you past the stars this night, straight to the arms of your friends and lovers in Quebec, but..."

"But?" The men edged closer, eager to hear the wolf's stipulation.

The eyes of the wolf narrowed and gleamed against the fire's blaze, and they knew at once that he was the devil. "You must not speak the name of God," said the wolf, his lip lifting in a snarl that revealed long fangs, "and you must not touch any crosses or steeples. You must also return by dawn. If you do not keep this agreement, you will forfeit your souls."

The men hardly noticed the heat of the wolf's breath sending steam spiraling into the darkness, as they quickly agreed.

Only Martin hesitated, for his mother had taught him not to listen to the voice of the wolf, but his uncle Baptiste quickly persuaded him to go. "You don't want some other man to steal Élise after all, do you?"

Martin shook his head and joined them.

The wolf lay down and stretched comfortably near the fire as the men settled into the canoe. They felt the earth fall away as the magical craft rose into the air. Soon, being expert canoe men, they grasped their bearings and picked up their paddles. They embarked with a joyful song as they paddled away across the heavens, and in a short time they arrived at the home of one of their friends in Quebec, where a festive party was taking place. Fiddlers played a rollicking tune, while people dressed in best array danced and sang.

The lumberjacks spilled through the door, joining their regale, and soon they all found their wives and sweethearts and kissed them well.

The night wore on. It seemed that five o'clock came much too soon, but alas, the time had come for the men to bid their loved ones farewell and be on their way. Martin had gotten a promise from Élise, so he, most of all, did not want to be ruin their pact with the wolf.

"It's time to embark!" He called the others together, only his uncle Baptiste was not to be found among them. Time ticked by, and the men began to panic. Finally they discovered Baptiste, drunk and asleep on the floor of a local establishment. Knowing his proclivity to profanity and clumsiness when he imbibed, they gagged and tied him in the bottom of the bark canoe, and soon they were sailing off into the heavens.

Just before dawn, however, Baptiste awoke with a start. The gag worked free and he used the Lord's name in vain.

"Non!" cried the men, as the canoe lurched. One of them reached out, grasping at anything which might steady them, and accidentally touched the cross at the top of a church steeple.

The men all shouted in despair, and Martin cried out to God as the canoe plunged downward toward the trees, spilling them into the darkness. Only the howl of a wolf met their ears from below. 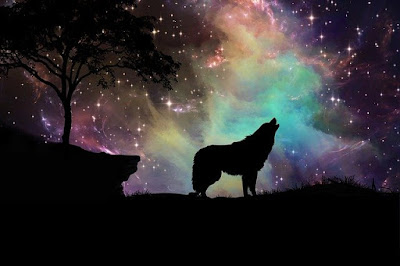 They struck the ground in a whirlwind of light, and a moment later, Martin opened his eyes. He lay in his bunk in their forest shanty and there, across the room, came the rumbling snores of his uncle Baptiste. Martin jerked upright and stared about the familiar cabin. A row of smelly socks hung stiff and dry on a line above the wood stove, just like always. Brisk morning air cut through Martin's shivering shoulders, just as it did each morning before he pulled his wool shirt over his long, heavy underwear. A little gasp of joy burst out of him, startling the others awake.

They came to one and all, each man's eyes widening with surprise that laced together fear and relief. They stared wordlessly at their surroundings. Had it been true then? Had they really flown precariously away, but been returned whole? One man felt his chest, testing to see if he were alive. Another muttered a prayer. Were their souls intact?

Martin and his uncle exchanged a long look. Perhaps that old wolf was merely a figment of their imaginations, or... maybe Divine intervention had given them another chance.

It was New Year's day, after all. 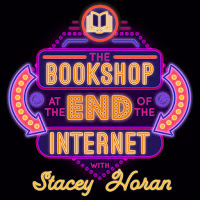 I have a lot to look forward to in the coming year. If you care to hear about upcoming books, historical research, the writing life, and some family fun, I invite you to listen to my recent podcast interview on The Bookshop at the End of the Internet.