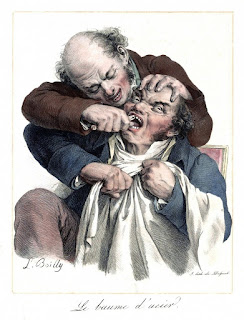 Today I’m wrapping up my series on 18th century hygiene with a look at dental care. When you’re researching a particular period, as we historical fiction writers do, you run across a lot of fascinating information about how people lived and took care of themselves back in the day. Though I doubt any specifics related to this subject will ever show up in my books, it does make a good, and in some instances hair-raising, topic for a blog post. So let’s delve into what was going on with teeth back in the 1700s.

No matter what class you belonged to, in past centuries everyone suffered from tooth decay and gum disease. Malaria, smallpox, scurvy, syphilis, and other diseases that can contribute to tooth decay were prevalent. Another contributor was the common diet, which consisted mainly of heavy meat dishes, salt-cured meats, sugary desserts, sweetened tea and coffee, and sweet wines and other alcoholic beverages, with little in the way of fresh fruits and vegetables. A well-known proverb of the time also maintained that a woman would lose a tooth with each pregnancy.

Naturally people wanted to look good and avoid pain, so daily tooth care was as imperative as it is today. The earliest type of toothbrush was made by the Egyptians and Babylonians, who chewed or mashed the ends of twigs until they were frayed, then used them to scrub debris from their teeth. Over the centuries, strips of linen, sponges, feathers, animal bones, and porcupine quills were also used for this purpose. When collections of cosmetic recipes became popular, mouthwashes and tooth powders were often included. Some of these contained abrasives like pumice or sugary substances like honey, which obviously would have been counterproductive, but there were a few that actually worked pretty well.

The Chinese invented the modern toothbrush between 1498 and 1600 by inserting coarse boar bristles into holes drilled into bamboo or animal bone handles. These devices eventually made their way west. The first reference to toothbrushes in Europe appeared in 1690, and in the early 1700s an Italian company, Marvis Toothpaste, filled the need by making toothpaste. British toothbrushes often used softer horsehair or even feathers. But in 1780 when William Addis began to mass produce toothbrushes similar to the ones we know today, he used cattle bone for the handle and went back to boar bristles, which were more effective and longer lasting.

Prior to and well into the 1700s, if you had problems with your teeth or lack thereof, you sought out your local doctor, barber, blacksmith, hairdresser, silversmith, or whomever advertised some kind of dental practice in you area. The main method of dealing with toothaches was extraction using forceps or a device called a pelican. During the 1700s an instrument called the key of Garengeot was developed. Later modified and called an English key, it was more efficient and less liable to fracture the jaw, teeth, or gums. Thank goodness for that!

The eighteenth century brought a flood of advancements in dental care. In 1711 Lorenz Heister of Frankfurt-am-Main published De Dentium Delore, a treatise on dentistry in which he opposed extracting teeth. Instead he advocated removing on the decayed part and filling the cavity with white wax, mastic or gold. Or lead foil. Yikes! I’m sure that suggestion had unintended consequences! However, if a large portion of the tooth had to be removed, he prescribed using prosthetics of ivory or hippopotamus tusks carved to fit. Then in 1756 a German surgeon advocated the use of electricity as a cure for toothache. Many other “experts” of the time claimed that steel magnets were effective in curing toothaches, though I haven’t found any evidence proving that this actually worked.

It was the French who led the way in dental science, with Pierre Fauchard (c.1690–1761) being considered the founder of modern dentistry. Before his time very little was written about dentistry, and methods were passed down from master to apprentice. Fauchard was the first to publish a comprehensive work on the subject, Le Chirurgien Dentiste (1728), in which he documented his own inventions along with all the knowledge available at that time. He also championed establishing a school of surgery where for the first time the theory and practice of dental surgery would be taught, thus elevating it to a practical science.

Fauchard was the first to insist on comfortable seating for patients during operations and also debunked claims such as the belief that worms burrowed in teeth causing toothaches and tooth decay, which had been popular for over a thousand years. Various Chinese remedies were commonly promoted to get rid of these worms. Some brave souls actually used arsenic pills. One wonders what the consequences of that were! Nicolas Andry, dean of the medical faculty of Paris in 1724, was one of these proponents, even claiming he’d observed tooth worms through a microscope and describing them as having small round heads, a black spot, and a long body. He maintained that they caused bad breath and advised employing smoke from henbane seeds to cause them to drop out. Fauchard did his own research and ended up refuting these claims. In addition he strongly condemned the common use of popular elixirs and folk cures and maintained that acids derived from sugars were responsible for tooth decay.

Replacing missing teeth was another widespread concern. Let’s dismiss one erroneous claim: false teeth made of wood. Common sense tells us that wood, being porous, prone to decay in moist environments, and subject to warping and splintering under pressure wouldn’t be a good substitute for tooth enamel. Not to mention that wood has a taste. Ugh. If anyone ever tried it, I’m sure they quickly discarded the idea. And no, George Washington never had wooden teeth.

Dentures were constructed using animal bones; walrus, elephant, or hippopotamus ivory; or even actual human teeth. In 1710, Jacques Guillemeau combined a number of different materials to replicate teeth, and Fauchard used silver, mother of pearl, and even enameled copper. He made a full upper set of teeth for a high-ranking lady in 1737, which was held in place with springs, and also a full upper and lower set for a man who wore them for more than 24 years. Around 1774 Alexis Duchateau created the first dentures of fine porcelain, which were mounted on gold or platinum bases. John Hunter, surgeon-dentist to the British Army in 1776, did extensive research in extracting and replanting teeth. Live teeth subsequently became so sought after that ads appeared in newspapers offering money for them. But it was Philip Pfaff,  dentist to Frederick the Great, who made what is considered the most important contribution to dental science by developing the process of creating a plaster model of a patient’s teeth from a beeswax impression.

Back to George Washington. The future president of the United States began losing his teeth at the age of twenty-two. It’s believed that at some point he had a set of dentures made by the famous Parisian dentist Nicholas De Chemant, a pioneer in the creation of porcelain teeth. We do know that not long before his death his personal dentist, John Greenwood, created dentures for him with teeth carved of hippopotamus ivory and held in place with gold wire springs. Apparently these were a great improvement over what he had been wearing.

You’re probably familiar with one of the most well-known American dental practitioners: Paul Revere. He was a silversmith, and silver was often used in fillings and caps. He constructed a dental bridge for Dr. Joseph Warren, who was killed at the Battle of Bunker Hill by a shot to the head. After the battle Revere identified Warren by his dental bridge, the first known case of postmortem dental forensics.

I was surprised that many of today’s dental procedures date back as far as the 1700s. Do any of these 18th century practices and advancements surprise—or perhaps horrify—you? Please share your thoughts!

~~~
J. M. Hochstetler is the daughter of Mennonite farmers and a lifelong student of history. She is a professional editor, a publisher, and the author of award-winning historical fiction whose books have been endorsed by bestselling authors such as Laura Frantz, Lori Benton, Jocelyn Green, Michelle Moran, and MaryLu Tyndal. Her American Patriot Series is the only comprehensive historical fiction series on the American Revolution. She is also the author of One Holy Night, which won the Christian Indie Publishing Association 2009 Book of the Year and co-authored the award-winning Northkill Amish Series with Bob Hostetler. 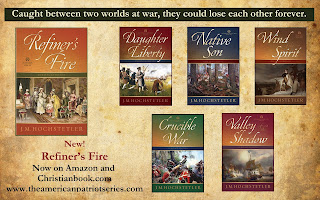