A Glimpse at the "Back-to-School" Supplies of Colonial America

I've got a passel of grand-kids heading back to school, from first-year college student to high school, grade school, Kindergarten, and Preschool. "Back-to-school" is a loosely used term in our family, as several of these youngsters are home-schooled. Therefore, while their days are definitely geared toward formal education, they aren't actually heading away from home. For them, the practice of "doing school" is not so different in some ways than what a lot of children experienced in Colonial America. Only some of the tools have changed.

While school attendance didn't become compulsory in America until only a hundred years ago, education was by no means lacking before then. In fact, there were numerous laws concerning education on the books in the first thirteen colonies. What that actually meant varies.

In the northern colonies, schools were being established by the colonial government among communities where people grouped together. In the middle colonies, most of that need was met by the free market. Schoolmasters commonly opened up shop and charged a fee for students to attend. In the southern colonies and on the frontier, most children were educated at home, at their mother's knees and in the fields, barns, and tool sheds where they learned the trades they'd need to become productive adults. In fact, almost all students, wherever they were raised, began their educations at home. The majority learned to read before they actually took on more formal education outside the home. It is said that the literacy rate in Colonial America was higher than 90%.

Across the colonies, most students used the same types of school supplies, and that list looks a bit different in some aspects than it does today. Many children began to learn their letters, memorize Scripture, and do simple reading exercises and mathematical sums with the help of a Hornbook.

A Hornbook was a small, wooden paddle with lessons tacked on the front. (About the size of a or 4" x 6" note card or a little larger.) Hornbooks usually had a hole in the end of the handle which could be strung with a cord for wearing on a child's belt or around the neck. The lesson itself was covered with a transparent piece of horn--kind of an early laminate--to protect it. I find this alone to be an amazing process, stemming from the 1500s. The horn, usually from an ox or sheep, went through a process of being boiled, separated, cooled in water, and eventually pressed into plates. This process took weeks. 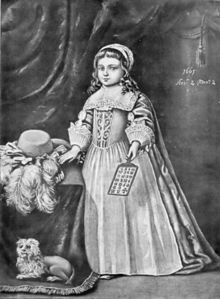 Hornbooks were eventually made of other materials too. If you'd like to do an educational, historical project with your children, grandchildren, or students, you can make your own hornbooks (not out of actual horn, of course). I'll post the link to the craft project at the end.

The Bible was the main book from which most children learned to read and memorize. Children commonly attended church and were familiar with Scripture. Those who couldn't attend were still taught the Word. Thus, they soon became proficient readers by learning to read passages in the Bible. 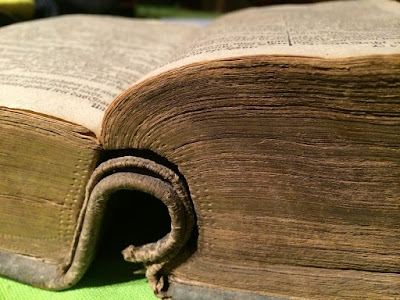 The New-England Primer was the main teaching textbook for children besides the Bible. Of course, any other books that might be available were prized. and many of these might be considered religious literature -- books such as Pilgrim's Progress by John Bunyan and Isaac Watt's Divine Songs. 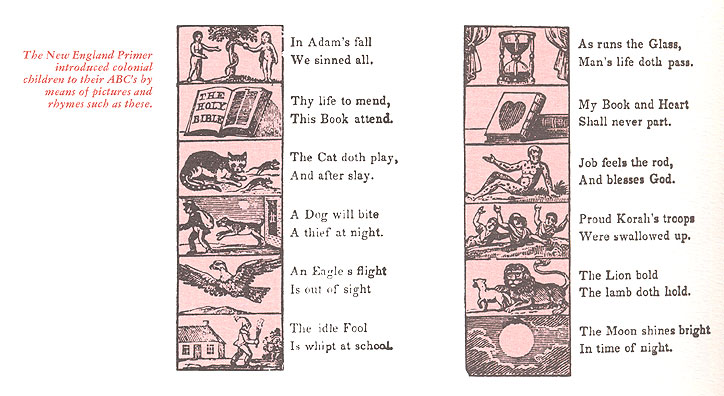 Writing Implements - Bear in mind, that children who grew up without the benefit of these basic educational supplies had less to work with, yet even on the frontier students would practice their letters with quills or lumps of coal on pieces of birch bark.

Slates came into use later. Used originally for roofing, they became popular in education in the latter part of the 18th century. Slates were about the size of a modern notebook, or a touch smaller, and were framed by wood.

A willingness to hard work was expected in order to acquire an educated mind. I include this, because hands-on experiences in practical daily living such as learning to sew, knit, build a wheel, churn butter, card wool, plant and harvest, work with iron and wood, practice animal husbandry--the list goes on--were tasks just as important as learning the basics of reading, writing, and arithmetic. No child could acquire skills for daily living and the ability to develop a trade without first learning a practical work ethic. 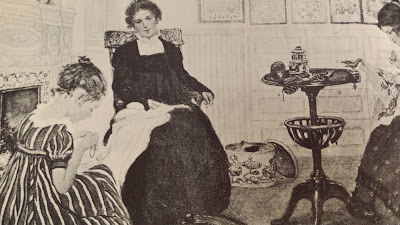 This is just a brief overview of things that might have been considered when preparing to teach a child in the American colonies. Despite the limited books and tools available to the average household compared with what we have today (not even considering computer technology), youngsters grew up well-educated in the societies in which they lived.

What is your favorite book or item on your back-to-school list this fall (even if you nor anyone in your household is going back to school)?

Would you like to make a hornbook with your youngster?
Click here to check out this fun project at Bookmaking With Kids.