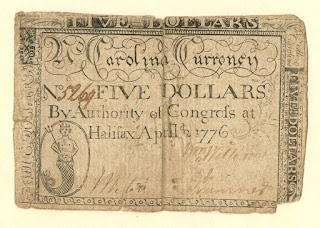 Cash, checks, credit cards, debit cards, and now, cell phones. What do all these have in common?

All, of course, are various methods we have in modern times of buying and selling. But how did people accomplish such a thing back in colonial days?

The monetary system at the time was based on the British pound. The problem was, however, a shortage of actual British money, either paper bills or coins. And like everything else, the Crown grappled for control of the currency standard within the colonies, where various things from wampum, to deerskins, to tobacco were in use as methods of trade. The printing of "notes," the slips of paper that we know as paper money, had also been in use for a long time, but these needed to be backed by something of actual value, whether gold, silver, or--as became popular in Colonial and Federal America--the land itself. There was also the problem of a colonial pound not being valued as highly as a British pound, and of one state not recognizing the value of notes issued by another state. And, of course, counterfeiting was huge, which Benjamin Franklin tried to combat by developing a printing process that involved using actual leaves. (You can see many examples of these at the Wiki link below, on early American currency.) By the end of the American Revolution, it was no wonder the term "not worth a continental" was so commonplace.

The American economy was a bit of a mess in the years after the war, with no standardized method of value and trade. Enter Alexander Hamilton, the first Secretary of the Treasury, who recommended that the country form its first national bank and standardize currency. This led to the passage of the Coinage Act in 1792, which said that American currency be in dollars and units, a decimal system which was easier to keep track of than pounds, shillings, and pence.

The continental dollar was originally based on the Spanish milled dollar, worth about 8 units of Spanish currency, or reales. This standard continued after the Coinage Act, and quarters, dimes, nickels, and cents would eventually follow. For the rest of the 18th century, however, and doubtless several years after 1800, pounds and shillings would still be in use as terms of value. I've found many references in primary sources of both terms, and it was also still very common for folk to trade in skins and tobacco, especially in frontier states such as Kentucky and Tennessee.

For more reading on this complex and fascinating topic, I recommend the following articles: