Have you ever heard of Noah Webster’s Blue-Back Speller? I hadn’t until I happened to run across a short article about it a few days ago. I did some research and learned that if you attended school in the United States during the late 1700s and well into the 1800s, you likely learned spelling using this book. Because it was usually printed with a blue cover, it soon became known as the Blue-Back Speller. It was the first of a three-volume collection originally titled A Grammatical Institute of the English Language. Webster added a grammar in 1784 and a reader in 1785.

Noah Webster, Jr. (1758–1843) was a teacher, lawyer, editor, and author. He has been called the father of American scholarship and education. As a teacher, he learned to dislike American elementary schools because they were often overcrowded and the teachers underpaid. And textbooks, such as The New England Primer or Thomas Dilworth’s A New Guide to the English Tongue, either focused primarily on teaching the Bible or came from England. Webster believed fervently that the American Revolution was not only about changing the nation’s political and economic institutions, but also about shaping a new American identity. Therefore, American children should be taught using American books that fostered republican ideals.

Webster’s goal was to transform the way Americans were taught to speak and write English in order to extend the ideals of the American Revolution to language and literature. The American people were the proper judges of correct speech, he maintained, and spelling should be simplified to agree with how words were actually pronounced. Through his speller and dictionary he aimed to cut the nation’s cultural ties to Britain and establish an intellectual foundation for American nationalism that would maintain republican values and social stability.

Webster observed that children pass through distinct learning phases in which they master increasingly complex or abstract tasks, and that they learn most easily when complex problems are broken into their component parts so they can master one part before moving to the next. He consequently arranged his speller to present words and the rules of spelling and pronunciation in an orderly manner that progressed by age, beginning with the alphabet and moving systematically through the different sounds of vowels and consonants. Syllables followed, with simple words coming next, then more complex words, and finally sentences. The speller was also intentionally secular; it did not mention God, the Bible, or any biblical events, although later in his life he did add some religious themes.

Generations of Americans learned how to read and spell using Webster’s Blue-Back Speller. He revised it several times, in 1786 changing its title to The American Spelling Book, and then in 1829 to The Elementary Spelling Book. It was the most popular American spelling book of its time. By 1837 it had sold 15 million copies, and some 60 million by 1890. In fact, his earnings from the speller allowed him to spend many years working on his famous American Dictionary of the English Language, first published in 1828.

After 1840 William Holmes McGuffey’s McGuffey Eclectic Readers began to challenge Webster’s books and eventually took over the market. But both Webster’s speller and dictionary changed American education dramatically by establishing the idea that spelling, grammar, and usage should be based on spoken language instead of on artificial rules.

When I was in first grade, I learned to read with the Dick and Jane books. I loved the pictures of Jane, Dick, Sally, Spot, and Puff and the stories that opened the world of reading to me. Every time I see pictures of the books, they bring back happy memories. Did you have a favorite textbook when you were in elementary school, and if so, why did you like it? Please share your memories! 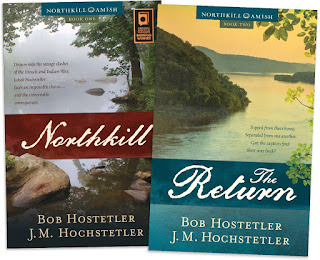 J. M. Hochstetler is the daughter of Mennonite farmers and a lifelong student of history. She is also an author, editor, and publisher. Her American Patriot Series is the only comprehensive historical fiction series on the American Revolution. Northkill, Book 1 of the Northkill Amish Series coauthored with Bob Hostetler, won Foreword Magazine’s 2014 INDYFAB Book of the Year Bronze Award for historical fiction. Book 2, The Return, released in April. One Holy Night, a contemporary retelling of the Christmas story, was the Christian Small Publishers 2009 Book of the Year.