My current writing project is The Return, Book 2 of the Northkill Amish Series, which I’m coauthoring with Bob Hostetler, and which releases April 1. This series is closely based on the inspiring true story of Bob’s and my Hochstetler ancestors, well-known among the Amish and Mennonites.

We’re fortunate that so much research has been done on the Hochstetler massacre, which took place on the Pennsylvania boarder on September 20, 1757, during the French and Indian War. We relied heavily on oral accounts passed down by Jakob’s descendents and published in the massive genealogical books of the Hochstetler family, Descendents of Jacob Hochstetler (DJH) and Descendents of Barbara Hochstetler Stutzman (DBH), and information from the Jakob Hochstetler Family Association Newsletter. We’re also greatly indebted to family researchers who located fascinating accounts in newspapers and other records of the day preserved in the Pennsylvania State Archives and in private collections. One of the most fascinating is Jacob’s interrogation by the British after he escaped from the Seneca village where he was held captive for seven months. Beth Hostetler Mark published this account in her compilation Our Flesh and Blood: A Documentary History of the Jacob Hochstetler Family During the French and Indian War Period, 1757–1765.

Jacob had been behind French lines and in 3 French forts during his captivity, and therefore was brought from Fort Augusta, which he reached on his escape, to Carlisle, Pennsylvania, to be interrogated by Colonel Henry Bouquet, second in command to British General John Forbes. This account survives in the Pennsylvania Archives and in Bouquet’s published papers, Vol I covering Dec 11, 1755, to May 31, 1758.

Bouquet’s Papers include the letter of Colonel James Burd, the commander at Fort Augusta to Pennsylvania governor William Denny on May 30, 1758, in which he describes Jacob’s arrival at the fort. “About five minutes before I march’d from Augusta, I observed a white man floating down the west branch on a piece of bark. I sent and took him up, he proved to be a Dutchman that was taken prisoner last Fall nigh to Reading and had made his escape from an Indian town above Vanango. I brought him with me to this place and Col Bouquet took his deposition and sent it to the General to which I beg leave to refer your Honour” (Papers of Henry Bouquet, Vol I, p. 396).

Bouquet’s first reference to Jacob is in a letter to General Forbes dated Carlisle May 29, 1758: “I had a German peasant brought here who was taken prisoner last year, and taken to Venango, etc. I am enclosing his deposition. The man is very stupid, and speaks only rude German. I did not think it necessary to send him to you. He is almost dead of hunger, having lived on grass for several days” (Papers of Henry Bouquet, Vol I, p. 388). Bouquet disliked the nonresistant Amish Swiss Germans who refused to bear arms, and his letters often express disgust at having to protect people who will not protect themselves.

According to Mark, although Jacob’s name was recorded in the deposition as John Hochtattler, “the details included in the ‘Examination’ so closely resemble the family story—both as recorded in newspapers and transmitted by oral tradition (DJH)—that family researchers, including the editor, believe that “John Hochttatler” was actually Jacob Hochstetler.” I haven’t found any record of another Indian captive with a name similar to Hochstetler or one who was from Berks County, Bern Township, and I also concur that the subject of this interrogation must be our ancestor.

This resource has been invaluable to us as we’ve striven to turn the bare historical records into a gripping story. Jacob and his 2 younger sons were taken on a 17-day journey from their home near present-day Shartlesville, Pennsylvania, to the French stronghold of Fort Presque Isle on the shore of Lake Erie—a journey of roughly 300 miles. Clearly, in spite of Bouquet’s unflattering assessment, Jacob must have been a strong, intelligent, and resourceful man to have endured what he did, find a way to escape, keep track of time and miles, give the answers he did during the interrogation despite being “half dead”, return home without any help from the British, and then pursue efforts to locate until finally his sons were returned to him. He was certainly a man of unwavering faith.

Following is the “Examination,” which reflects the French transcriber’s spelling, e.g., words like jou” for “you.” The information within brackets was inserted for the sake of clarity. The dates given by the transcriber are incorrect according to facts that have since come to light.

Intelligence given by John Hochstattler a Swiss by nation which settled in Bergs County, Berner Township, near Kauffman’s Creek was taken by the enemy Indians the 12th of October 1757 [actually September 20] and escap’d from them arriving at Shamokin 5th [actually the 24th] May 1758 [Shamokin was formerly an Indian village at the junction of the north and west branches of the Susquehanna River, at the present site of Sunbury, Northumberland County, PA. Fort Augusta was erected there by the colony in 1756].

Q. By What, and how Many Indians was you taken?
A. By the Delaware and Shawanese 15 in the whole.
Q. Which way did you pas’d before jou came into the Enemys Country?
A. We March’d 3 Days before we arrived at the Est branch of Susquahanna 20 miles from Shamokin where it was fordable, from there whe keept intirely West all along the west Branch, till after 17 Days Journey we arrived on the Ohio. [The Allegheny River. Indians and many Whites considered the it to be the upper course of the Ohio and its headwaters.]
Q. In what place on the Ohio do jou arrivd?
A. Where the French Cr empties in to Ohio there upon the Corner is a small Fort [Fort Mechault built by the French in 1756] Established lately, of Logs, Framed together, there are 25 Men Garrisoned in it, without Artillery, there we passed the Ohio for to come by it, the place is call Wenango [Venango, a former Indian village and important trading post at the mouth of French Creek, the present site of Franklin, Venango Co., PA.]
Q. How do jou proceeded further?
A. Up the French Creek 3 Days traveling on Battoes at the end of it we came to a fort [Fort LeBoeuf built by the French in 1753 at present day Waterford, Erie Co. Pa.] built in the same Maner as the other, and Garrisoned, with 25 Men, from there the French Creek a Road to Presque Isle [Fort Presque Isle built by the French in 1753 at present-day Erie, Pennsylvania] wich is a Days Journey from it Distant.
Q. What became of jou after that?
A. After 3 Days travel Est south Est, I was brought to Buxotons Cr [Buxotons is another spelling of Buckaloons, one of the names given to Brokenstraw Creek and to the village at its mouth near present Irvine, Pa.] where it emptys in the Ohio whe came to an Indian Castle which lys upon the Corner of it, there I was keept Prisoner all the that time.
Q. Do jou ever hear anything of Fort Du Quesne / .
A. Ten Days before I Escaped five Dutch Prisoners was brought up by the Indians from there wich told me there was 300 Man Garrisond in Fort du Quesne, the Provision Scarce, so that the Indians was oblichd to bring away thier Womans and famelys which they generally left there, for to be nourish’d in thier absence / .
Q. Are there any Works about, besyts the Fort jous heard of / .
A. The same People told me that there was a Dutchman Prisoner for 3 years in the Fort, a Baker by Trade, which shewd them a Hill, at the opposite of the Fort over the Monungahela, telling them If the English was there that the could certainly take the Fort with 200 Man because the French had nothing upon it / .
Q. Do jou never heard what Cañons the French had there / .
A. Yes I heard several but all Dismounted / .
Q. Do jou never Learnd if the Indians Receivd Order for Marching against us?
A. 5 Days before I did escape an old Indian was telling to me shewing against all parts of the world, that Indians was coming there and then he shewed about Est south Est, telling that the would attack the English there, wich I did imagine that It was Intended for Shamokin / .
Q. Do you Ever Learn from how the French got Intelligence of / .
A. 6 Weeks before my Departing there came 2 Delaware Indians telling that the came from Shamoking that the Comandat took thier arms from them not trusting, and that the English was Drawing together about Conostoge [Conestoga about seven miles south of Lancaster near present Millersville] or Lancaster, paying up a great Deal of Cattle, that the Designd to attack the great Fort, du Quesne and the was waiting till the grass was groan / .
Q. How do you Escapd from there, how long and in what Mañer do jou was coming, and where did jou arrive / .
A. I got the liberty for hunting, one morning Wery soon took my gun finding Bark Canoe on the River wherein I crossd it, traveling Est for 6 Days from there I arrvd at the source of the west Branch, there I march for 4 Days further till I was sure of it, there I took several Bloks tying them together till I got a flott, there I flotted myself Down the River for 5 Days where I did arrive at Shamokin, Living all time upon grass I passd in the Whole for 15 Days.
(The Papers of Henry Bouquet,1972, Vol I, pp. 391-393)

For more information about this historical event and the series, go to the Northkill website.

Has your family preserved genealogical records and historical accounts? If so, please share a brief story about one of your ancestors. 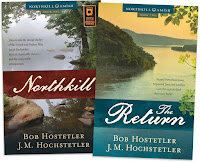 J. M. Hochstetler is the daughter of Mennonite farmers and a lifelong student of history. She is also an author, editor, and publisher. Northkill, Book 1 of the Northkill Amish Series coauthored with Bob Hostetler, won Foreword Magazine’s 2014 INDYFAB Book of the Year Bronze Award for historical fiction. Book 2, The Return, releases in Spring 2017. Her American Patriot Series is the only comprehensive historical fiction series on the American Revolution. One Holy Night, a contemporary retelling of the Christmas story, was the Christian Small Publishers 2009 Book of the Year.