Many of our visitors have been guests at our new book release tea parties here at Colonial Quills. So, I thought I'd share some highlights from a delicious book entitled Tea Drinking in 18th-Century America: Its Etiquette and Equipage by Rodris Roth that can be found in its entirety at Project Gutenburg. Some of the information is seen through the foreign observer of American customs. Today I will share some vignettes about the tradition and art of Taking Tea in Part 1. Tomorrow I will share a bonus post, Part 2, on Tea Equipage. Excerpts will be found in italics, while I supplement my own comments in regular text. 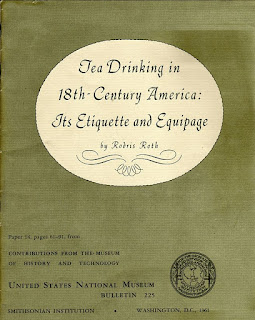 At first the scarcity and expense of the tea, the costly paraphernalia used to serve it, and the leisure considered necessary to consume it, limited the use of this commodity to the upper classes. For these reasons, social tea drinking was, understandably, a prestige custom.

In America, as in England, tea had a rather limited use as a social beverage during the early 1700’s. . . At this time ale and wine, in contrast to tea, were fairly common drinks. Colonial gentry in Virginia and in the Carolinas a preference was showed for "sober liqueurs," while the common partaking of tea caught on slower in New England.

English customs were generally imitated in this country, particularly in the urban centers. Of Boston, where he visited in 1740, Joseph Bennett observed that “the ladies here visit, drink tea and indulge every little piece of gentility to the height of the mode and neglect the affairs of their families with as good grace as the finest ladies in London.” . . English modes and manners remained a part of the social behavior after the colonies became an independent nation. . . During the 18th century the serving of tea privately in the morning and socially in the afternoon or early evening was an established custom in many households. . . This tea-drinking schedule was followed throughout the colonies. In Boston the people “take a great deal of tea in the morning,” have dinner at two o’clock, and “about five o’clock they take more tea, some wine, madeira [and] punch,”reported the Baron Cromot du Bourg during his visit in 1781.

The gracious art of brewing and serving tea was as much an instrument of sociability as was a bit of music or conversation. . . Tea seems to have been the excuse for many a social gathering, large or small, formal or informal. And sometimes an invitation to drink tea meant a rather elegant party. . . At tea parties, cakes, cold pastries, sweetmeats, preserved fruits, and plates of cracked nuts might also be served, according to Mrs. Anne Grant’s reminiscences of pre-Revolutionary America. . . Sometimes wine and punch were served at teatime, and “in summer,” observed Barbé-Marbois, “they add fruit and other things to drink.” Coffee too might be served. As the Frenchman Claude Blanchard explained. 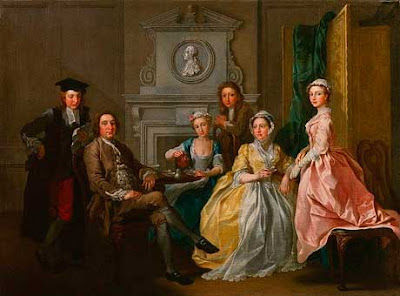 Obviously, young men and women enjoyed the sociability of teatime, for it provided an ideal occasion to get acquainted. . . Tea was not only a beverage of courtship; it also was associated with marriage. Both Peter Kalm, in 1750, and Moreau de St. Méry, in the 1790’s, report the Philadelphia custom of expressing good wishes to a newly married couple by paying them a personal visit soon after the marriage. It was the duty of the bride to serve wine and punch to the callers before noon and tea and wine in the afternoon.


[Children's] tea sets were available for even the youngest hostesses. . . No doubt, make-believe teatime and pretend tea drinking were a part of some children’s playtime activities. Perhaps many a little girl played at serving tea and dreamed of having a tea party of her own, but few were as fortunate as young Peggy Livingston who, at about the age of five, was allowed to invite “by card ... 20 young misses” to her own “Tea Party & Ball.” She “treated them with all good things, & a violin,” wrote her grandfather. There were “5 coaches at ye door at 10 when they departed. I was much amused 2 hours.”

The tea ceremony, sometimes simple, sometimes elaborate, was the very core of family life. Moreau de St. Méry observed in 1795, during his residence in Philadelphia, that “the whole family is united at tea, to which friends, acquaintances and even strangers are invited.” . . . In the daily routine of activities when the hour for tea arrived, Moreau de St. Méry remarked that “the mistress of the house serves it and passes it around.” In the words of another late-18th-century diarist, the Marquis de Barbé-Marbois, those present might “seat themselves at a spotless mahogany table, and the eldest daughter of the household or one of the youngest married women makes the tea and gives a cup to each person in the company.” 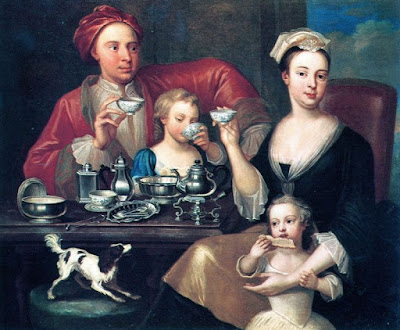 Throughout the 18th century the well-equipped tea table would have displayed most of the items seen in this painting: a teapot, slop bowl (for tea dregs), container for milk or cream, tea canister, sugar container, tongs, teaspoons, and cups and saucers. These pieces were basic to the tea ceremony and, with the addition of a tea urn which came into use during the latter part of the 18th century, have remained the established tea equipage up to the present day.

While the Americans, as the Europeans, added cream or milk and sugar to their tea, the use of lemon with the beverage is questionable. Nowhere is there any indication that the citrus fruit was served or used with tea in 18th-century America. Punch seems to have been the drink with which lemons were associated.


Some of you may be surprised to learn that tea in the early 18th century was sipped from small porcelain tea bowls, not handled tea cups. Some even drank from the saucer. However, the practice of saucer sipping, while it may have been common among the general public, was frowned upon by polite society. The fact that Americans preferred and were “accustomed to eat everything hot” further explains why tea generally was drunk from the cup instead of the saucer. According to Peter Kalm, “when the English women [that is, of English descent] drank tea, they never poured it out of the cup into the saucer to cool it, but drank it as hot as it came from the teapot.” A “dish of tea” was an expression rather than a way of drinking tea in the 18th century. On the table a saucer seems always to have been placed under the cup whether the cup was right side up or upside down. 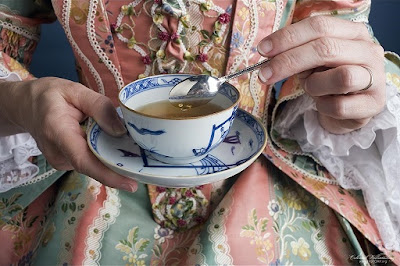 When one had satisfied their appetite for tea it needed to be done with grace. To politely decline another serving of tea without offending the hostess one must adhere to the ceremony of the spoon by turning the cup upside down and placing a spoon upon it. During his visit to Philadelphia in 1782, Prince de Broglie was advised by the French Ambassador that: "It is almost as ill-bred to refuse a cup of tea when it is offered to you, as it would [be] indiscreet for the mistress of the house to propose a fresh one, when the ceremony of the spoon has notified her that we no longer wish to partake of it."

As we know, at times tea was forsaken in the colonies, save for American grown substitutes, during the years of taxation from Britain. One expression of distaste for tea, prior to the American Revolution, was shared in a rhyme published in a colonial newspaper.

A Lady’s Adieu to Her Tea-Table

FAREWELL the Tea-board with your gaudy attire,
Ye cups and ye saucers that I did admire;
To my cream pot and tongs I now bid adieu;
That pleasure’s all fled that I once found in you.
Farewell pretty chest that so lately did shine,
With hyson and congo and best double fine;
Many a sweet moment by you I have sat,
Hearing girls and old maids to tattle and chat;
And the spruce coxcomb laugh at nothing at all,
Only some silly work that might happen to fall.
No more shall my teapot so generous be
In filling the cups with this pernicious tea,
For I’ll fill it with water and drink out the same,
Before I’ll lose LIBERTY that dearest name,
Because I am taught (and believe it is fact)
That our ruin is aimed at in the late act,
Of imposing a duty on all foreign Teas,
Which detestable stuff we can quit when we please.
LIBERTY’S The Goddess that I do adore,
And I’ll maintain her right until my last hour,
Before she shall part I will die in the cause,
For I’ll never be govern’d by tyranny’s laws.


Do you enjoy drinking tea or do you prefer another type of hot beverage? Do you have any tea traditions? How often do you drink tea? 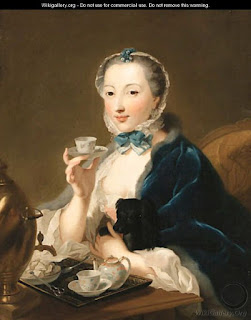 Please be sure to visit us for our next Colonial Quills New Book Release Tea Party this Friday, October 16, 2015. You may join us in the salon (our Facebook event page) and then in our tea parlor here at Colonial Quills.
Posted by Carla Gade