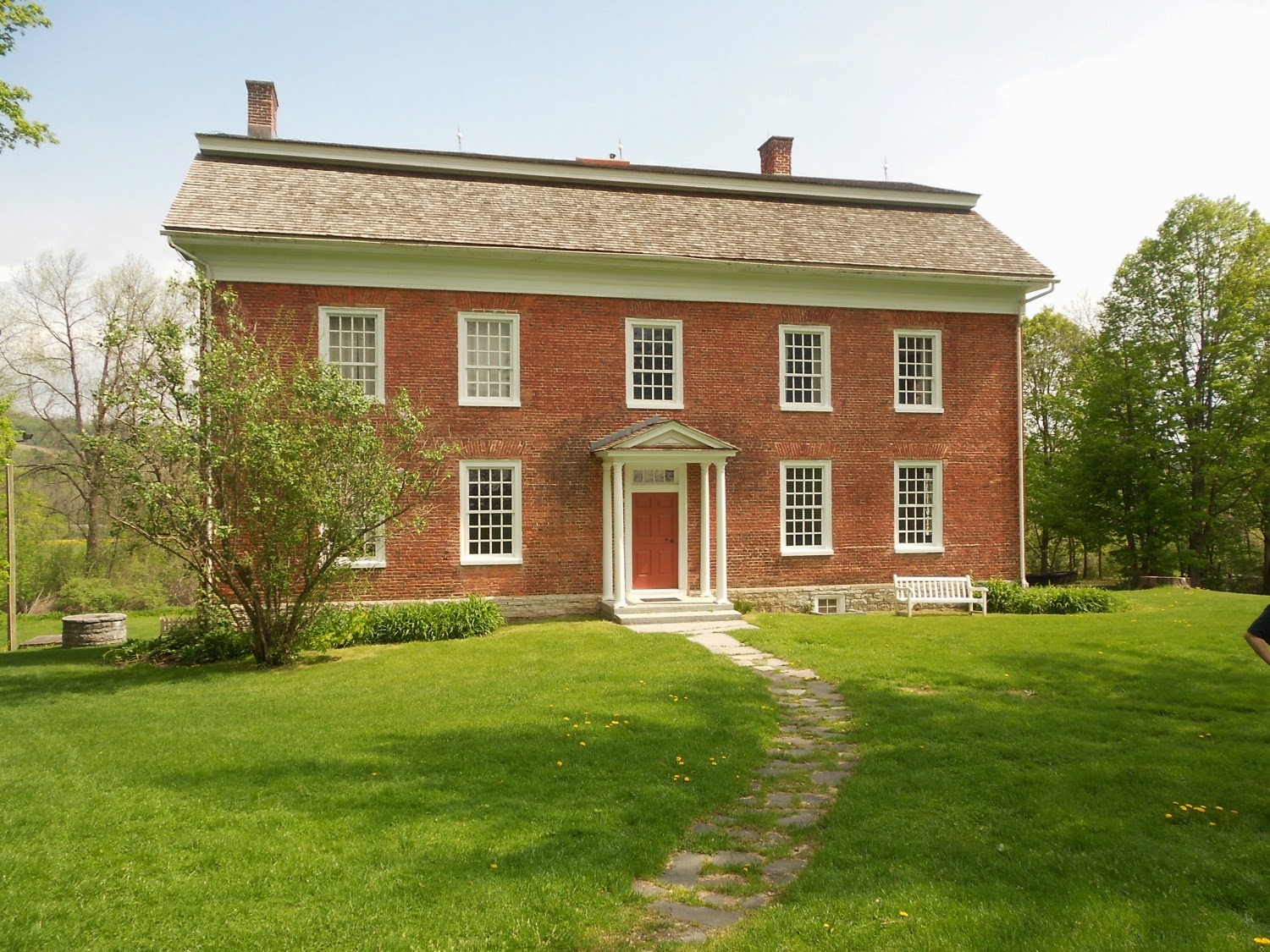 The gorgeous Mohawk Valley in upstate New York hosts the home of Nicholas Herkimer, a war hero during the American Revolution. He was a Brigadier General of the Tryon County (New York) militia—a man virtually unknown to me until I saw the John Ford film classic, “Drums Along the Mohawk” a few years ago.

Herkimer was the third generation in New York of a group known as German Palatines. They descended from the 13,000 Germans who fled the attacks by the French in their homeland in the early 1700’s. England sent 3,000 of these refugees to the colonies as slaves who needed to work off their passage to the New World.

An opportunity arose for the Palatines to own land when the colony of New York offered acreage along the Mohawk River Valley. This was hardly altruistic on the part of the colony. This was unprotected territory on the fringe of New York where the Palatines were used as buffers for any attacks by the French or unfriendly Native Americans. 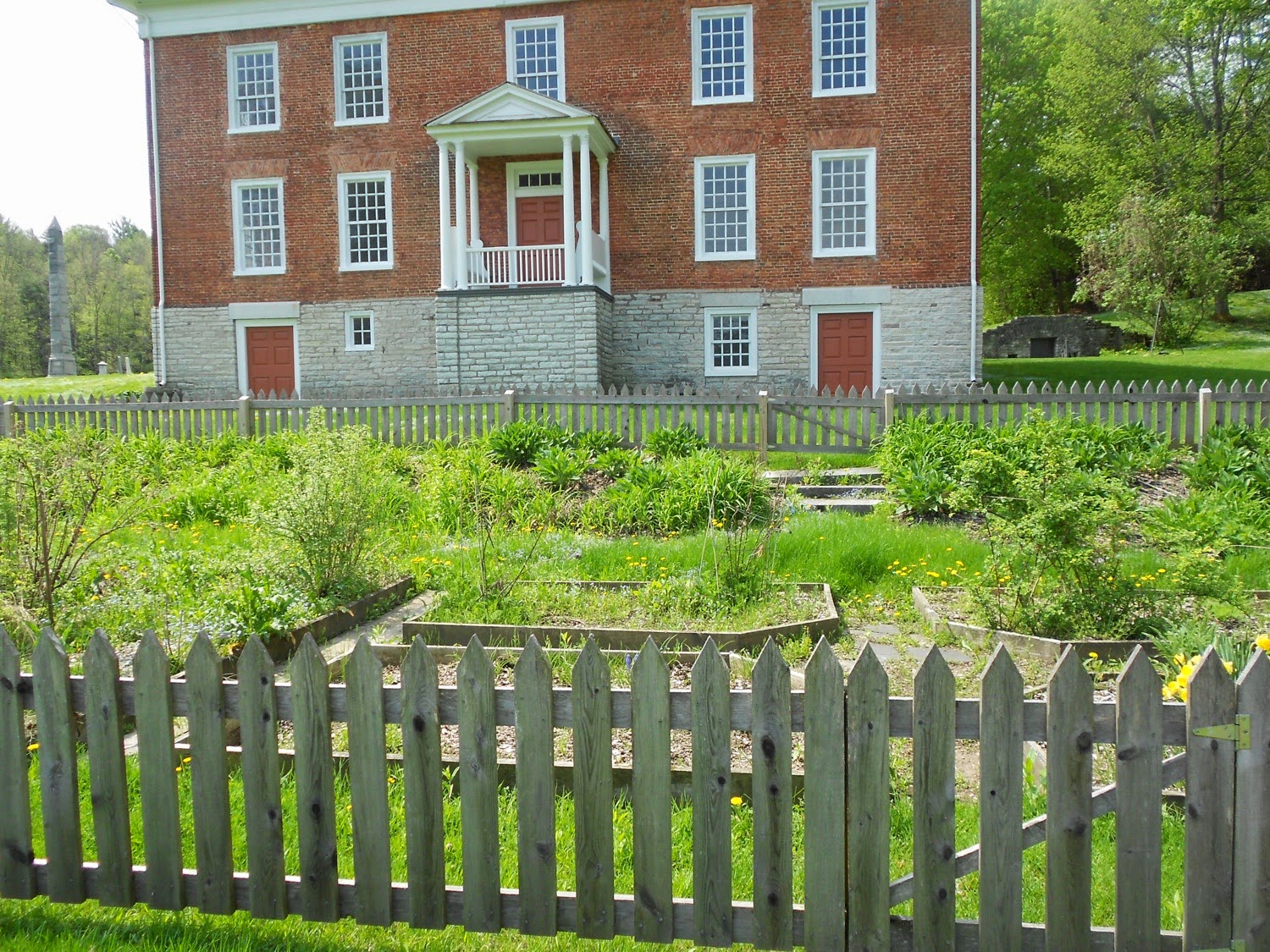 Herkimer’s grandfather settled on a tract near Little Falls where he set up a trading business that thrived. Although the family started out as indentured servants in America, the family home near Little Falls speaks to the prosperity that succeeding generations procured through trading, land speculation and farming.

The Herkimer family home was fortified during the French and Indian War. Nicholas, only in his 20’s, had his first military command at Fort Herkimer in 1757.

The oldest of 13 children, Herkimer was given a tract of land from his father in 1760. That is where he built a brick home for his own family.

When the Revolution broke out, Herkimer took up the Patriot cause and was named Colonel of a militia battalion for the Continentals. In 1776, he was promoted to Brigadier General. Besides the threat of British troops, the residents of the Mohawk Valley were under constant threat from unfriendly Indians who declared their loyalty to the King of England.

The situation became explosive when an Oneida blacksmith informed Herkimer of a British force under Brigadier General Barry St. Leger coming from the north. This massive army consisted of the British regulars, American Loyalists, and Indians. They intended to attack at Fort Stanwix, then occupied by Continental troops from New York and Massachusetts. 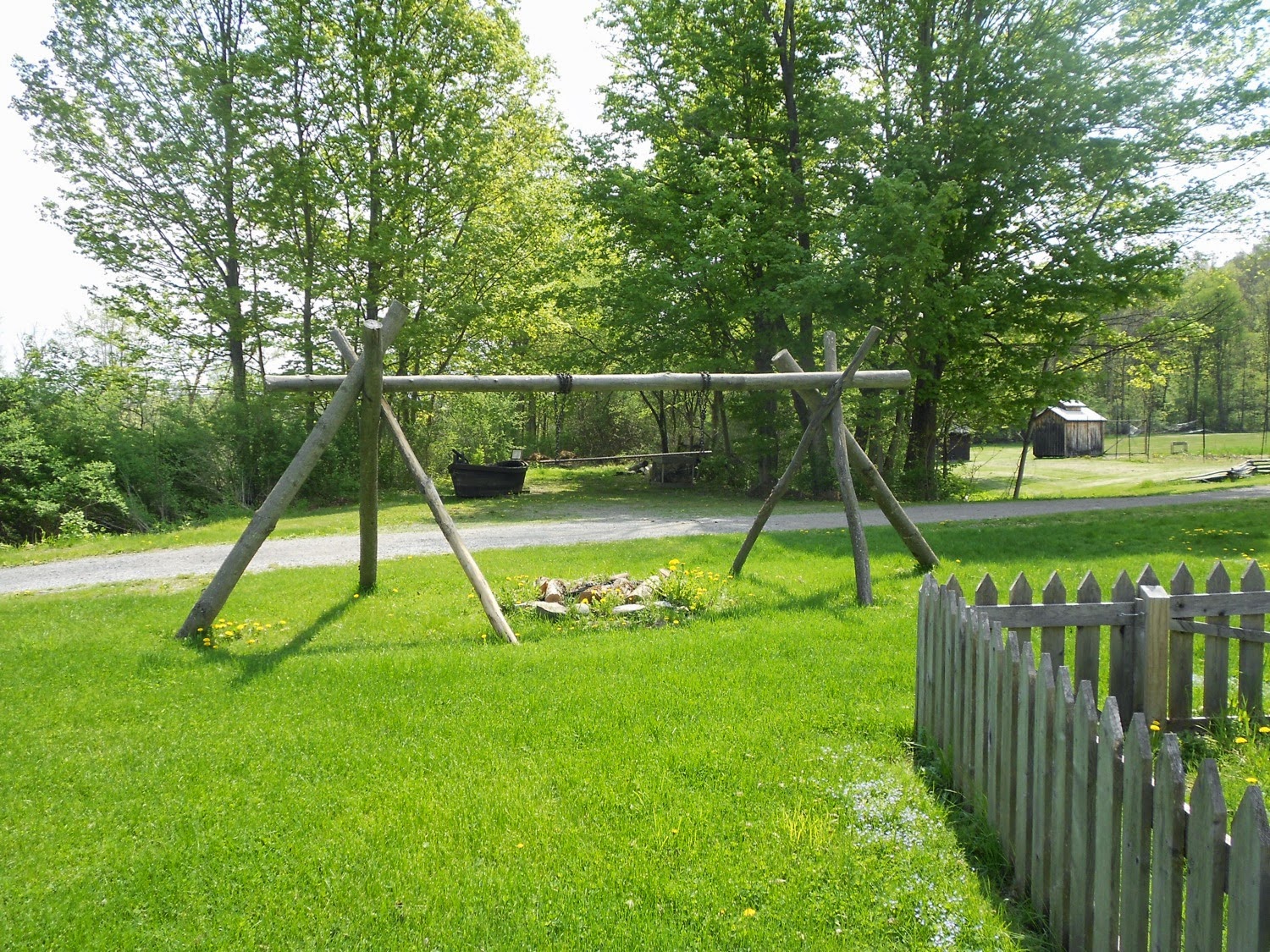 Herkimer mustered 800 men (including a group of Oneida Indians) to join the American militia to try to stop St. Leger. They arrived at the Oneida Village of Oriska on August 5, 1777. Communication with the fort was delayed and discontent among Herkimer’s officers, who accused the Brigadier General of being a Loyalist like his brother, infuriated Herkimer. He ordered his troops forward.

St. Leger learned of the approaching militia and sent a large force to attack. They waited in ambush.

The battle that followed on Oriskany (or-iss’-cunny) Creek became one of the bloodiest of the American Revolution with musket fire erupting from three sides and militiamen falling one on top of the other.

Herkimer himself was wounded when bullets felled his horse and one musket ball passed through his leg. Herkimer’s men dragged him under a tree, where the general (propped on his saddle) continued to direct his men. The battle continued but the militia suffered the loss of an estimated 500 soldiers. The losses might have been greater except for a sudden and severe thunderstorm that interrupted the fighting. The storm gave Herkimer time to tighten the resistance. 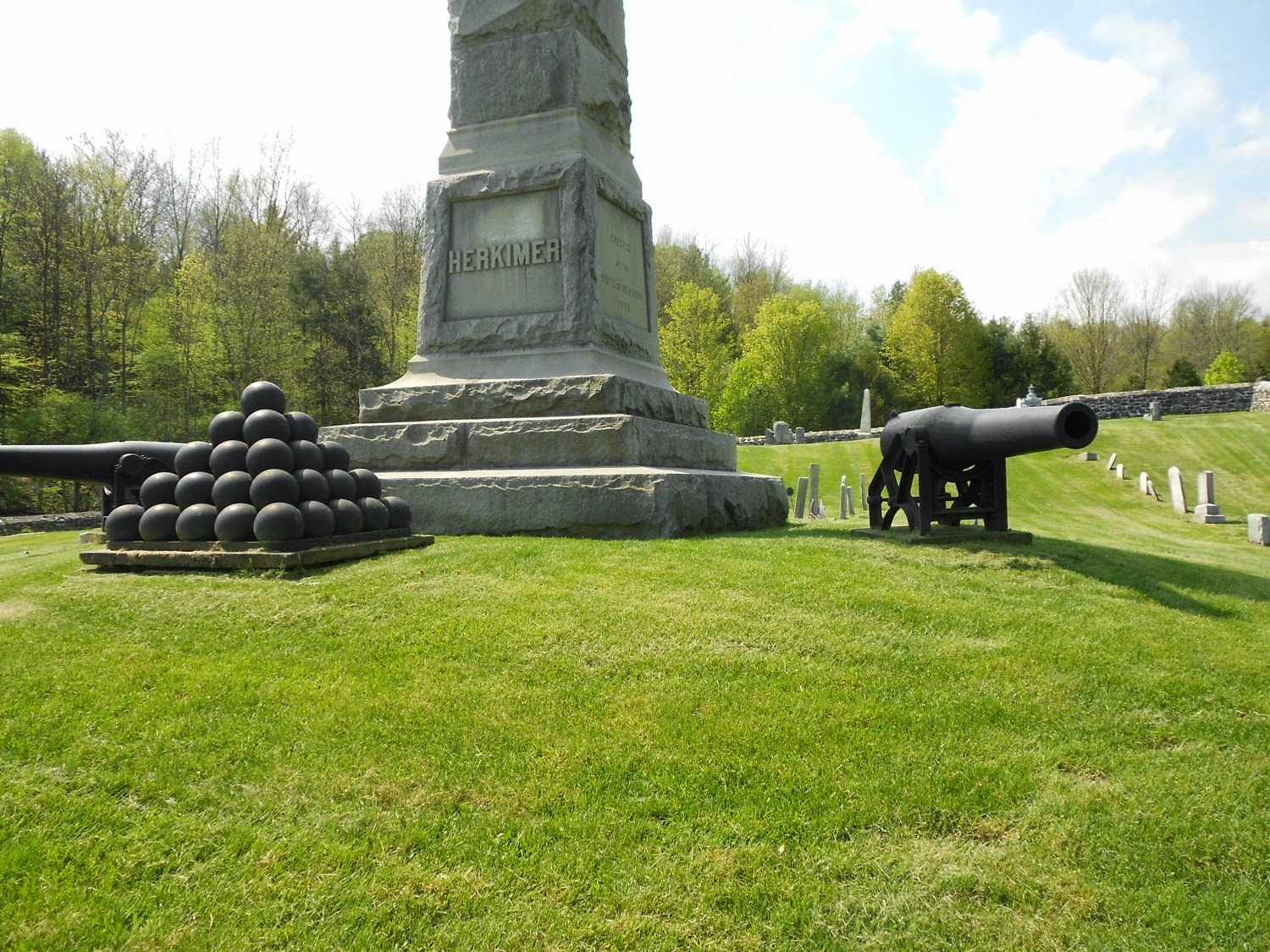 Although both sides claimed victory, the Battle of Oriskany is traditionally viewed as an American defeat. However, the battle marked a turning point in St. Leger’s command. As word of approaching reinforcements under Major General Benedict Arnold reached his ears, St. Leger began retreating to Lake Ontario. This retreat prevented his army from reinforcing British General John Burgoyne in Saratoga—the battle that was the turning point in favor of the American Continentals in October, 1777.

As for Brigadier General Nicholas Herkimer, he was carried by his surviving men to his home in Little Falls. When his wound became infected, it was decided that his leg needed amputation. Uncontrolled bleeding after the amputation signaled the end was near. It is reported that Herkimer called for his pipe and Bible, and read out loud until he passed into eternity. 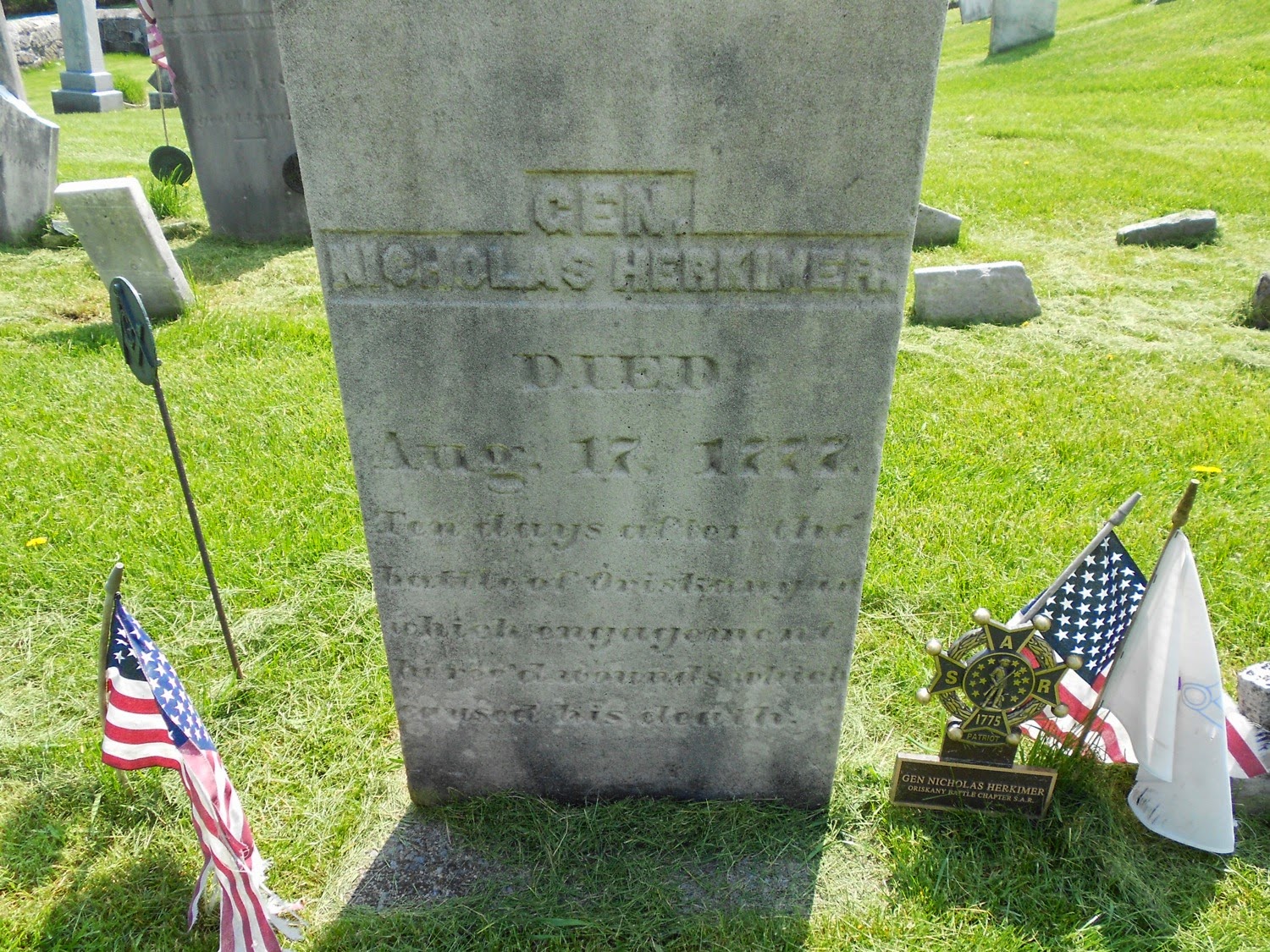 Although most accounts state his date of death as August 16, 1777, his tombstone in the cemetery next to his home is engraved with the date he died: August 17, 1777.

Nicholas Herkimer’s legacy is memorialized in his lovely Colonial home in Little Falls, New York. It inspires a visitor to remember his remarkable achievement in the steps leading to the resolution of the Revolution. Huzzah, General Herkimer.