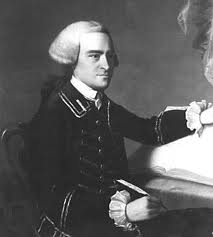 still John Hancock’s ornate signature that draws the eye. His artistic style is looked upon with fascination by young and old alike.
It is such a stark contrast to the methods of written communication today. Hovering with bent shoulders, writers click away on keyboards, leaving the "art" to the creation of passages that draw pictures for readers to envision. But the actual fonts? They are produced, magically it seems, by the software in computers.
So how did the Colonials write like that back in Early America? The students learned the art with painstaking practice. With a feather quill and homemade ink, these boys and girls refined their strokes in great flowing style that marked an era of intricate penmanship—an art nearly forgotten.

The script demonstrated by John Hancock was known as the “Boston Style of Writing,” taught by Abiah Holbrook, who was esteemed as a great master of the pen. Writing masters were universally honored in every community, according to Home and Child Life in Colonial Days by Shirley Glubock. In 1745, Mr. Holbrook had 220 scholars in one school, learning this art of penmanship. John Hancock was one of Holbrook’s most notable students. 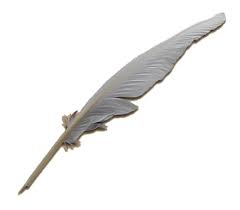 It’s difficult to imagine all the intricacies of this type of written communication. It required a sharp quill with the feather still attached, usually from a goose. Some managed to perfect the art of sharpening the point of the quill with a knife—the origin of the word, “pen-knife.” Those not wanting to sharpen their own could have them done by professionals who stationed themselves on streets. These gentlemen were called “stationers.”

And then there was the ink. There were various recipes that produced the blue liquid that dried black and eventually faded to a brown tone. An essential ingredient of the formula was galls—odd swellings on oak trees that were a natural reaction to parasites—combined with copperas, which is an iron compound. This produced an ink that has lasted through hundreds of years, making letters from long ago still visible to the naked eye. And beautifully visible at that. The script makes any document look more art than narrative.

One recipe of olde to make “excellent ink:”
Raine water 3 gallons, of white wine vinegar a quart, gaules two pounds, gum arabeck one pound, pomegranate pills one quarter of a pound, all these bruised but not beat too small, copporus two ounces, this will be ready the sooner, if it stand nearby the fire, or in the sun.”