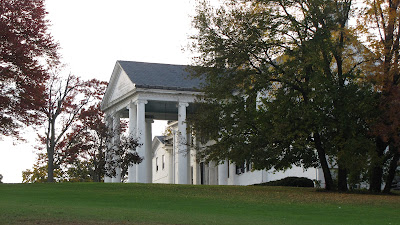 Through Hallowed Ground corridor, this view, including the sloping lawn to the Civil War Memorial commemorating the site of General Meade's assuming command of the Army of the Potomac prior to the Battle of Gettysburg, is iconic to Frederick's history and should be a key part of the community's future.
Frederick County offers a wealth of history to Maryland and the nation. Prospect Hall, built by Daniel Dulaney c. 1787, is one of Frederick's earliest and most significant historic sites. It symbolizes the nation's history through its architecture, its prominent setting on Frederick's highest elevation, the many visitors important to our nation's history including U.S. presidents from George Washington to Harry Truman, and the regionally prominent families who owned it. The mansion was situated with great effect by its builder, and all of its owners over the past 225 years have maintained its stately approach.' 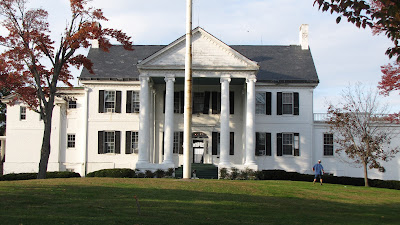 Unfortunately, the planning commission passed the proposal for the building of 13 4-story apartment buildings on the property. This means all along a lovely two-lane road between the City and County lines, a large grove of trees will be removed. The complex will intrude upon the beautiful land where Prospect Hall sits, even though the plan is to landscape the community and to build buildings that have a complimentary look to the Hall. The good news is the old Hall will be preserved and a line of trees will go between the apartments and it. Still, I am saddened by sprawl around our historic places.