In the mid-eighties, I began writing what later became A Heart For Freedom, a story that centered around an eighteenth-century ordinary. Later, Setting Two Hearts Free would also take place at the same ordinary, Stewarts' Green.

Ordinaries were business establishments placed in towns, and on or near roads to accommodate travelers. They also often were located near river-crossings for the same reason. Rooms for sleeping, meals, and care for horses were all provided at a reasonable cost.

When I was researching for the story, I met a couple who lived in what was once an eighteenth-century ordinary only ten miles from where I lived in Loudoun County, VA. Visiting Cattail Ordinary was such a treat. It was located not far from what was a colonial thoroughfare as well as a ferry crossing. The owners generously lent me a book, The Journal of Nicholas Cresswell: 1774-1777. He was a British traveler who stayed in the ordinary on more than one occasion. It detailed all of his travels throughout the colonies and frontier. The same journal has since been republished several times, more recently as A Man Apart.

Anyone who writes for or visits this site enjoys history, but reading a first-person account of an era gives the reader a greater insight into the attitudes and experiences of people at the time. Since this journal was written by an Englishman who visited the colonies from 1774 to 1777, his observations and understanding would be different than a participant in the war or from the viewpoint of a historian.

Nicholas Cresswell sailed to Virginia, believing that “a person with a small fortune may live much better and make greater improvements in America than he can possibly do in England.” In his mid-twenties, he was seeking to independently establish himself in America but those plans would be thwarted by the onset of the Revolution. Though a subject of King George, Cresswell was by no means an advocate of the colonial Loyalists. He expresses some objectivity in the book for both the Loyalist and the Patriot causes. The diary he maintained covered his travels primarily in the mid-Atlantic region and the frontier, what is now Ohio and Illinois. His observations are interesting. His experience was certainly tainted by the timing of his visit, and would have been so different had he come at another time. 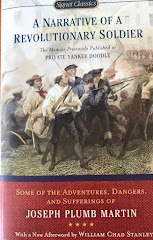 A Narrative of a Revolutionary Soldier by Joseph Plumb Martin provides an entirely different wartime experience not only because it is written by a man who enlisted as a Patriot at fifteen but it was written when he was a seventy-year-old man. It is believed that he based this narrative on journals he may have kept in his younger years. Time and maturity no doubt influenced the retelling of his experiences providing perspective. Had he written it during the war, he no doubt would have been less objective. The son of a “wandering clergyman” Joseph was raised by his grandparents in Connecticut. He details numerous battles he participated in and often endured extreme starvation and hardship. Among tales of friendship, he tells unflattering stories of hardhearted civilians and dishonest soldiers. He learned there were many Loyalists among his countrymen and discovered that the war was not only against the invading British army but was also a civil war often dividing neighbors and families. It’s a fascinating commentary by someone who was there.

Do you enjoy reading historical events by people who were present?