I’ve been blessed to know Jane for several years. She is a godly woman with a variety of musical gifts.

You worked with Colonial Williamsburg (CW) for several years. Please tell us about your experience.

I began working at Colonial Williamsburg in 1975 as a sales associate at The Golden Ball, a silver and jewelry store in the historic area. During those three years, I also sang for evening programs during the Christmas season and at summer outdoor recitals.

Did you incorporate music into working for CW?

I was blessed to be a full-time musician at Colonial Williamsburg for the last 27 years of my career there. In 1983, after a 5-year leave of absence, I sang in evening concerts at the Capitol, Palace and as a tavern balladeer. In 1988 I was hired as a full-time musician with CW working at the Music Teacher’s Room (MTR) and then throughout the historic area.

The work varied from day to day and season to season. Several of us were in the ballroom of the Governor’s Palace, either performing music or dancing as guests toured the Palace.  Each group took five minutes so in 2 hours we might see up to 20 groups or more of school groups 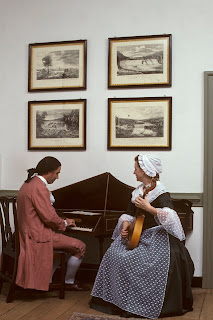 and regular visitors. We might repeat that at the Palace or at the Wythe or Geddy house. We joined forces with the theatrical interpreters when we all became the Performing Arts department and added music and dance to several other venues. We worked evening hours several nights a week at Capitol, Raleigh, and Palace concerts and during busy holiday times, Carter’s Grove and balls at the Governor’s Palace.  I retired as a supervisor of the music and dance department in 2015. 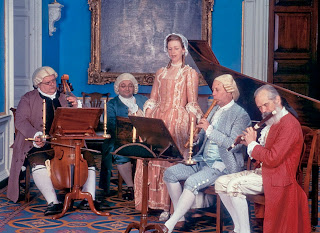 Can you tell us about some of the interesting people you met or worked with during these years?

I met the great opera singer Beverly Sills and Chief Justice Earl Warren at the opening of the De Witt Wallace Museum in 1985.  I sang for one of the Premiers of China and the Secretary-General of the UN, Kofi Annan.

What roles did you have as a reenactor and what were your favorite and most memorable? 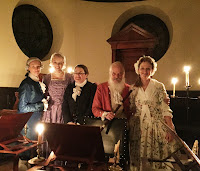 Reenacting began at Colonial Williamsburg in the 1980s but for many years only a few people in CW were actual “character interpreters” as they were called.  The rest of us interpreted in “third person” rather than “first-person”…though we dressed in 18th-century clothing, we talked from the 20th-century perspective.  My first character role was as one of the Lady Dunmore when we started doing “Days in History”. Eventually, I was asked to play Lady Dunmore every day.

My favorite assignment was to play a beautiful antique harpsichord in the Palace and sing in the ballroom. I chatted with guests about my Dunmore family, the house, instruments, portraits, and décor for two hours at a time. Other days I left the Palace in a carriage to go “shop-hopping” in town with my “daughters”. We stopped at several locations where shop keepers brought us wares to taste or “buy”.  Holiday balls were the most fun when Lord and Lady Dunmore would greet guests above stairs. Then later in the evening, we went downstairs and made our grand entrance into the Ballroom. The evening ended with dancing the minuet and several country dances.

During the summer, when I was Lady Dunmore, several junior interpreters were assigned to me as my children. We invented activities to act out. I eventually aged out as Lady Dunmore and was replaced by a younger woman. In my last years at CW, I took over the role of Anne Neil, who advertised as a music and sewing teacher during the revolution. Like all the actor interpreters I aimed at representing the characters respectfully and accurately.

That must have involved a variety of costumes. Eighteenth-century clothing can provide some challenges. What experiences with costumes can you share with us? 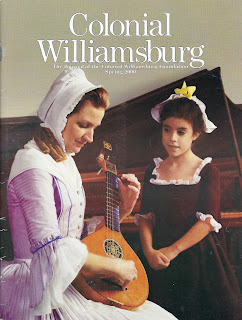 Over the years I worked at CW, the costuming became more and more authentic. In the 70s the gowns were made of a mix of cotton and polyester and we wore none of the period undergarments. By the late 80s, we wore shifts, stays, hoops, stockings, caps rather than pinners and more authentic shoes, some handmade.  At first, it took me forever to get dressed every morning but gradually it became second nature. Wearing the clothing was a privilege and helped me enter the day in character, particularly the clothes that were made just for me. They fit so well. Long skirts and gowns were no fun in the rain though as I was always dragging a wet hem around, and wearing stays are definitely hot in the summer. People often asked us if we were hot in the summer, but I can say, though I was warm, wearing cotton and linen helped and hoops kept your skirt away from your legs.

Thank you, Jane, for letting us know a bit about the life of a reenactor. I’ve often wondered about how interpreters endured the 18th-century clothing in summer.