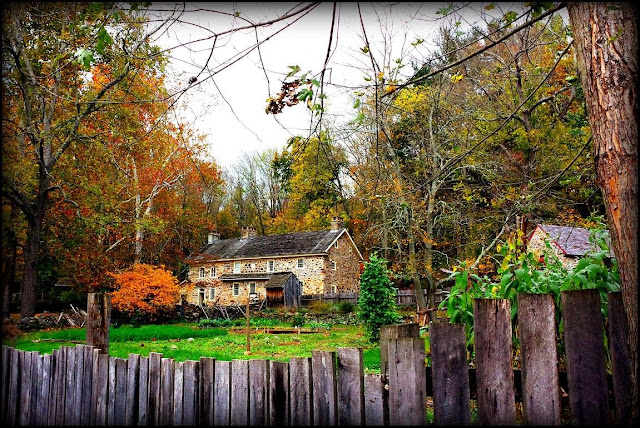 The Colonial Pennsylvania Plantation is a historical museum and working farm located in Ridley Creek State Park in Media (Delaware County), Pennsylvania. The plantation, which was a working farm continuously for over three hundred years, differs from many colonial historical sites in that it depicts the life of the common man—the “yeoman,” or farmer—instead of that of a well-known figure, during the 1760s to 1790s.

While the plantation’s original owner is not certainly known, the property was purchased by Joseph Pratt, an English Quaker, in 1720. At that point, the original portion of the farmhouse (built either before 1700 or around 1705) was already standing and the land encompassed 110 to 120 acres. Wheat, usually the winter variety, was Pennsylvania’s primary crop at this time, and farmers in the area also grew rye, corn, and flax, among other things. Crops are still grown on the land today, but the plantation’s location within a state park makes this more difficult, as deer and other animals see the fields as their dinner table. Such animals would have been disposed of in colonial times, but now they are protected by being within the park limits.

The Pratt family remained on the property until May 1820, when the original owner's great-grandson sold it at auction. It continued to be a working farm under its new ownership, eventually becoming a tenant farm in the twentieth century. In the 1960s, Pennsylvania bought approximately 2,500 acres to create Ridley Creek State Park, and a local group formed to preserve the old houses within the park. One particular house, part of the Lower Rawle farm, was abandoned but provided the necessities for a farm museum. From 1973 until the present, historians have restored the farmhouse, outbuildings, and land to accurately reflect eighteenth-century farm life.

Also on the property are a kitchen garden, spring house, still room, stone cabin, wagon barn, stable barn, sheepfold, pigpen, and chicken house, as well as crop fields, a wet meadow, and an orchard. For safety reasons, the animals are kept penned while the farm is open to visitors, but on off hours, most of the animals are released to roam the land freely, as they would have in colonial times.


If you're ever in the area and would like to visit the Colonial Pennsylvania Plantation, it's open on Saturdays and Sunday from April till November. You can find more information at www.colonialplantation.com.