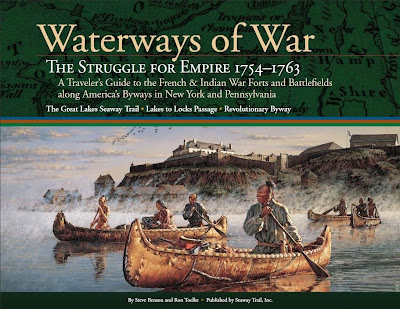 What a book!
In August of 2012, Deb Marvin and I took a short vacation/research trip to Sacket’s Harbor, N.Y. to glean information, visit museums and see reenactments for the War of 1812, and to brainstorm ideas for books set in that time period. When we stopped into one of the beautiful museum homes in the village, I’d wandered into the gift shop and the cover of this book caught my eye. I don’t know why I’m drawn to this particular time period—but I suspect it has something to do with Last of the Mohicans by James Fenimore Cooper, a book I read as a child, and seeing the movie of the same name with Daniel Day Lewis ;).
I’d always enjoyed reading about the powerful and well-documented American Revolution, but I sought an earlier time; something more rugged and mysterious. The French and Indian War (considered the Seven Years War in Europe) seemed more deeply shrouded in the mists of time, much like the mists rising above the waters on the book’s cover painting, Departure at Daybreak by Robert Griffing (Fort Niagara 1769).
This book takes us down three paths to meet with exciting events in the War. The Great Lakes Seaway Trail, which hi-lights battles, and people of note, by way of Fort de la Presentation, Old Fort Niagara, Fort de la Presque Isle (Pennsylvania) and more. Don’t you love the French names?
From there we swing through central New York along the Revolutionary Byway (a tip of the hat to the American Revolution), to visit Fort Stanwix of the battle of Oriskany fame, near Rome, N.Y., further along, the home of Sir William Johnson, Johnson Hall State Historic site, and finally the beautiful Schenectady Stockade Historic District.
In the Lakes to Locks Passage chapters you’ll discover fascinating details about such places as Fort Edward and Rogers’ Island, where Rogers’ Rangers, the King’s Special Forces, whose guerrilla war tactics are practiced by our military’s special forces today, were stationed. Visit Fort William Henry of Last of the Mohicans fame, the Lake George shipwrecks, Crown Point Historic Site and much more.
Generously illustrated by Don Troiani (an illustrator who accurately depicts people from the early American time period) and other artists, you’ll find prints, maps and paintings of figures wearing authentically detailed period clothing and uniforms.

I’ve only reviewed non-fiction books I felt deserved between four and five star ratings (five being the best). Hopefully they will take you to places you’d like to visit, and are historically accurate, enjoyable and beneficial for any research you might need. My rating for this book: Five Stars