When building a colonial town, one of the first structures to go up was usually the courthouse--right in the center of everything. Pittsboro, NC is a perfect example of this with a circle of traffic constantly around the colonial courthouse. While the current structure was built in 1881, the original courthouse was much older.

Pittsboro was established in 1785 and is the county seat for Chatham County named for William Pitt, the first Earl of Chatham. In 1770 The Colonial Assembly established the county. The city was named for his son, William Pitt. To the right is a front view of the newly restored courthouse after it caught fire in 2010. It opened as an historical museum in April 2013. Below is a side view showing how the road circles around it like an island. 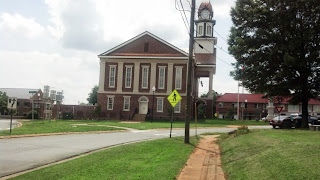 During the early 1700's settlers of English, Irish, Scottish and German decent arrived along two main routes, south from Virginia on The Great Wagon Road or up the Cape Fear River from the Carolina coast. In the early years, the county was governed by justices of the peace, which served the Court of Pleas and Quarter Sessions. The justices were appointed by the state’s General Assembly. For a period of time, the justices also appointed other county officials, which included the sheriff, coroner, constables, clerk, register, county attorney, standard-keeper, entry-taker and surveyor, rangers and overseers of roads.

Even today Pittsboro has a small town atmosphere of historical value. Yet, it is only 34 miles southwest of the capital city of Raleigh. Many of the historic buildings remain as shops. The image below is from the balcony of the courthouse. 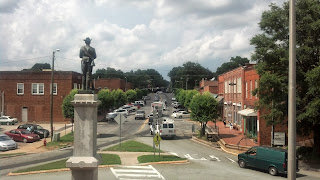