Award winning Inspirational Historical Romance author earned a Bachelors degree in International Studies from the University of South Florida, and a Master of Theology from International Theological Seminary.  Over the years, she has been blessed to visit forty-eight states and twenty-five countries, including a year spent teaching English in the People’s Republic of China.

"Ms. Capshaw’s ability to bring her readers into the time periods that she writes about is staggering. " - Eye on Romance reviews 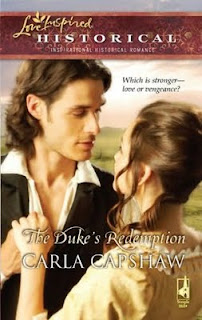 The Duke's Redemption
Danger and intrigue follow Elise Cooper wherever she goes. Surviving on her wits and her faith, Elise, code named the Fox, is the most elusive patriot spy in South Carolina.  When a double agent threatens to turn Elise over to the British, she fights for her life and makes a narrow escape...
But when Drake Amberly, fifth duke of Hawk Haven, learns of his brother's death and the failed investigation to find the spy who shot him, he heads for America determined to see the murderous brigand brought to justice.  Once in Charles Town, he follows the Fox's trail to Brixton Hall Plantation where he meets Elise Cooper.  As Drake tracks the Fox, he and Elise fall deeply in love. Once they wed, everything seems idyllic, until a trap he sets for the Fox exposes his beloved as his sworn enemy, forcing him to choose between his quest for vengeance or the traitorous wife whose love and faith may prove to be his downfall or The Duke's Redemption.
Excerpt from Chapter Two
Charles Town, South Carolina, 1781
The fine hairs on Elise’s arms and the back of her neck stood at attention, alerting her to the odd sensation of being watched.
She glanced around the ballroom, trying to appear nonchalant.  Her breath caught in her throat when she noticed the man observing her.  He was dark, she noted, handsome in a fierce sort of way.  His sculpted lips turned in a half smile, but it was the long scar along his jaw that intrigued her.


Tall and broad shouldered, the stranger cut a fine figure in black waistcoat and breeches.  His stark white shirt and elegant, but simple stock stood in sharp contrast with his golden skin.  He wore his black hair tied at the nape, one of only a few men in the room bold enough to refuse a wig.
His gaze captured hers.  His magnetic eyes bore into her, seeming within a moment to discern her darkest secrets.  He rattled her nerves, made her instantly more aware of herself in a manner that was most disconcerting.   To a woman used to being in the midst of trouble, he seemed the essence of it.

She decided then to steer clear of him, for in one glance she knew his ilk: pure danger in masculine form.
Zechariah patted her hand.  “Elise?  Are you ill?”
She blinked and looked down into her spymaster's round face.  “I’m fine.  Why do you ask?”
“You’ve nearly drawn blood.”
Her gaze fell to where her fingernails dug into his linen-clad arm.  She released him immediately.
Zechariah fiddled with the froth of lace at his wrist.  “Get hold of yourself, girl.  You'll never accomplish what you must if you're more skittish than a colt."
Elise narrowed her eyes and bit back a sharp retort.  She kept her expression cheerful so as not to give away the game to onlookers, but she resented his tone.  She despised his hold on her life.  But he’d offered the escape she’d prayed for as part of the bargain she'd made to free her sister.  For now, she could do little but accept his sharp ways.  Others believed she was his ward, when in actuality he was her warden.
"I'm neither skittish nor incapable of performing my task.  The man by the mantle, the dark one, he startled me is all.  I turned to see him staring a hole in my back."
Zechariah observed the man covertly.  "That, my dear, is Drake Amberly, the man you’re to investigate.  You’d do well to encourage his interest.  If he were to become besotted with you, it would make your task much easier."
Elise bristled with indignation.  Her instincts warned Amberly was the one man in the Colonies she should avoid at all costs.  “I have a troublesome feeling about him.”
“Perhaps meeting him will alleviate the sensation.”  His tone cloaked a rod of iron.  “Allow me to introduce you.”
She took a deep breath and let it out slowly.  The unease she’d labored under for much of the day increased.  Her palms grew moist.  The closer she walked toward Amberly, the faster her heart raced.
When they came abreast of the man, Zechariah extended his beefy paw in greeting.  He spoke loudly, competing with the party’s din of music, dancers and conversation.  “Amberly, I’m pleased to see you’ve joined us.  I hope the journey from Charles Town was not too taxing."
“Not at all.  The river was smooth, the boat swift.  I arrived before an hour passed.”
“Excellent, I’m glad to hear it.”  Zechariah rocked on his heels, his hands clamped behind his back.  “I trust the maid saw you settled?”
“Most comfortably, thank you.  Your hospitality is much appreciated.”
Even as he spoke with Zechariah, Amberly’s eyes returned to her face again and again.  Heat rose to her cheeks for no reason at all.  She hoped the powder and rouge she’d applied before the party disguised her reaction.
“We’re pleased to have you here.”  Zechariah turned to her.  “Amberly, I’d like you to meet my ward, Miss Elise Cooper.   Elise, this is Mr. Drake Amberly, direct from London.   He’ll be staying with us for the next few weeks.”
No one told her he’d be a long-term guest.  She offered her hand politely, schooling her features to prevent her dismay from reflecting on her face.  His large, tanned hand engulfed her much smaller one.  He bowed and kissed the back of her knuckles.  His scent of spice and soap teased her senses.  She shivered, aware her response to him was profoundly peculiar.  Only the force of her will kept her planted before him.
Intense, lushly lashed eyes caught and held hers.  “The pleasure is all mine, Miss Cooper.  I am most fortunate to make your acquaintance.”
His voice was deep and smooth except for a few clipped words that reminded her of the English upper class.  The observation brought her halfway back to her senses.  She had to remember her orders, not allow herself to be waylaid by a handsome face.
She giggled, resorting to her role as a featherbrain.  Experience had taught her a man let his guard down around a woman he considered a simpleton.  “I’m charmed, Mr. Amberly.  A girl could lose her head with a man as handsome as you in the room.”
“Why thank you, Miss Cooper.  I’m flattered.”
He seemed more amused than complimented.  She tapped him playfully with her fan and gifted him with a flirtatious grin.  “Surely not.  I’ve seen the other ladies swarming you tonight.  Most likely you’ve grown weary of praise.”  She motioned toward the dancers behind her.  “Forgive my boldness, but would you be so kind, sir?  I truly love to dance.  Since my escort is the guest of honor, he’s obliged to take a turn with the other ladies tonight.  I fear I’ll be left to sit with the matrons if one of you fine gentlemen doesn’t take pity on me.”
“It would be my honor, Miss Cooper.  However, I never acquired the skill of dancing.  May I interest you in some refreshment instead?”
“You never learned to dance?  How unusual,” she remarked, her eyes as wide and innocent as a babe’s.
“Dancing isn’t a sport in large demand on a ship.”
She smiled coyly.  His refusal to dance might work to her advantage.  Perhaps she could get him alone, away from the crowd and music that would disrupt conversation and her ability to uncover more about him.  “I so wanted to dance, but I suppose a glass of refreshment will do.  Why don’t you fetch us a drink?  I’ll gather my shawl and meet you in the garden.  It’s such a pretty night.  I see no reason to waste it indoors.”
Amberly grinned. “A superb idea, Miss Cooper.  To the garden it is.”

For a chance to win a copy of The Duke's Redemption, please leave a comment with your email address. Winner will be drawn next Monday.
Posted by Carla Gade